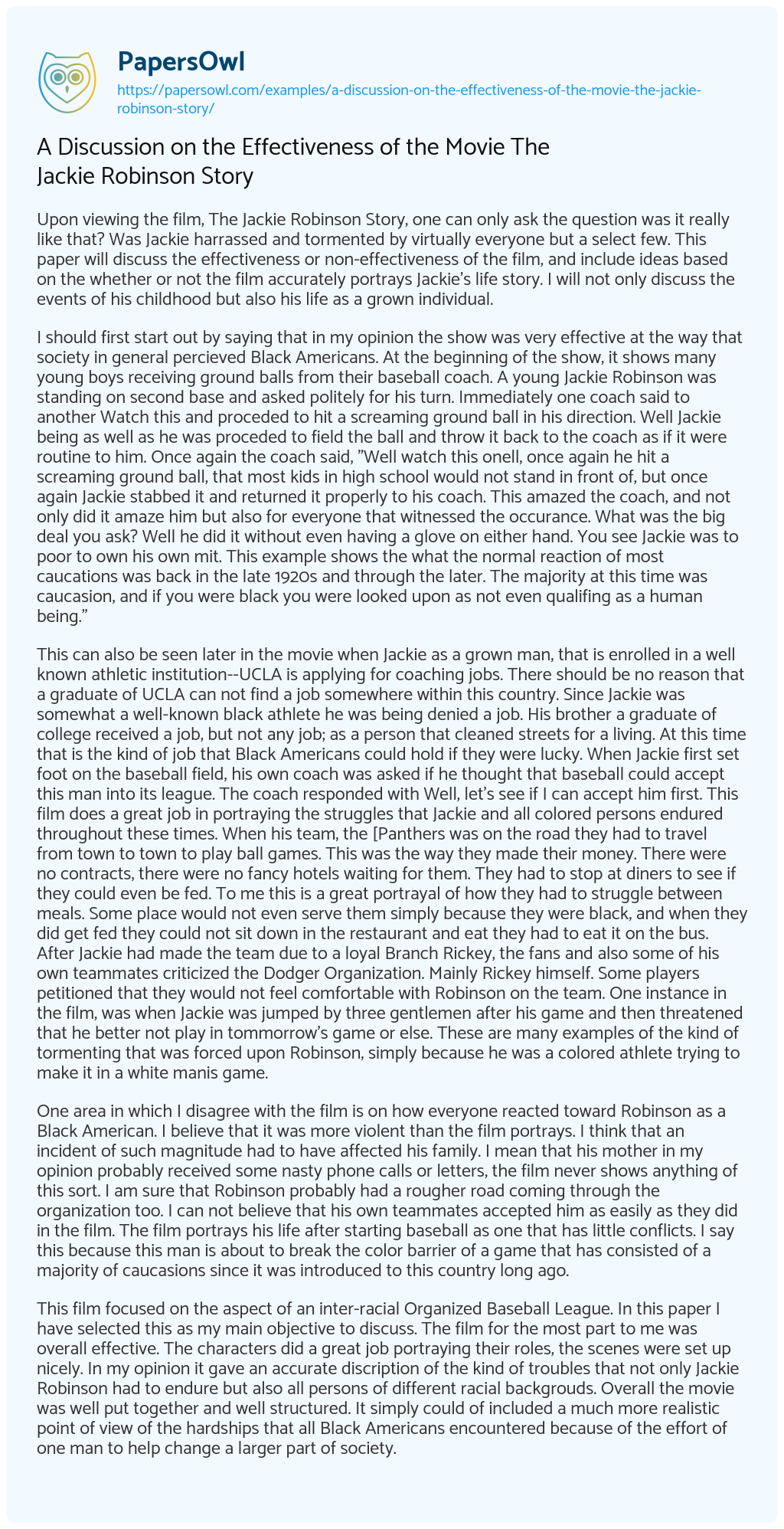 Upon viewing the film, The Jackie Robinson Story, one can only ask the question was it really like that? Was Jackie harrassed and tormented by virtually everyone but a select few. This paper will discuss the effectiveness or non-effectiveness of the film, and include ideas based on the whether or not the film accurately portrays Jackie’s life story. I will not only discuss the events of his childhood but also his life as a grown individual.

I should first start out by saying that in my opinion the show was very effective at the way that society in general percieved Black Americans. At the beginning of the show, it shows many young boys receiving ground balls from their baseball coach. A young Jackie Robinson was standing on second base and asked politely for his turn. Immediately one coach said to another Watch this and proceded to hit a screaming ground ball in his direction. Well Jackie being as well as he was proceded to field the ball and throw it back to the coach as if it were routine to him. Once again the coach said, “Well watch this onell, once again he hit a screaming ground ball, that most kids in high school would not stand in front of, but once again Jackie stabbed it and returned it properly to his coach. This amazed the coach, and not only did it amaze him but also for everyone that witnessed the occurance. What was the big deal you ask? Well he did it without even having a glove on either hand. You see Jackie was to poor to own his own mit. This example shows the what the normal reaction of most caucations was back in the late 1920s and through the later. The majority at this time was caucasion, and if you were black you were looked upon as not even qualifing as a human being.”

This can also be seen later in the movie when Jackie as a grown man, that is enrolled in a well known athletic institution–UCLA is applying for coaching jobs. There should be no reason that a graduate of UCLA can not find a job somewhere within this country. Since Jackie was somewhat a well-known black athlete he was being denied a job. His brother a graduate of college received a job, but not any job; as a person that cleaned streets for a living. At this time that is the kind of job that Black Americans could hold if they were lucky. When Jackie first set foot on the baseball field, his own coach was asked if he thought that baseball could accept this man into its league. The coach responded with Well, let’s see if I can accept him first. This film does a great job in portraying the struggles that Jackie and all colored persons endured throughout these times. When his team, the [Panthers was on the road they had to travel from town to town to play ball games. This was the way they made their money. There were no contracts, there were no fancy hotels waiting for them. They had to stop at diners to see if they could even be fed. To me this is a great portrayal of how they had to struggle between meals. Some place would not even serve them simply because they were black, and when they did get fed they could not sit down in the restaurant and eat they had to eat it on the bus. After Jackie had made the team due to a loyal Branch Rickey, the fans and also some of his own teammates criticized the Dodger Organization. Mainly Rickey himself. Some players petitioned that they would not feel comfortable with Robinson on the team. One instance in the film, was when Jackie was jumped by three gentlemen after his game and then threatened that he better not play in tommorrow’s game or else. These are many examples of the kind of tormenting that was forced upon Robinson, simply because he was a colored athlete trying to make it in a white manis game.

One area in which I disagree with the film is on how everyone reacted toward Robinson as a Black American. I believe that it was more violent than the film portrays. I think that an incident of such magnitude had to have affected his family. I mean that his mother in my opinion probably received some nasty phone calls or letters, the film never shows anything of this sort. I am sure that Robinson probably had a rougher road coming through the organization too. I can not believe that his own teammates accepted him as easily as they did in the film. The film portrays his life after starting baseball as one that has little conflicts. I say this because this man is about to break the color barrier of a game that has consisted of a majority of caucasions since it was introduced to this country long ago.

This film focused on the aspect of an inter-racial Organized Baseball League. In this paper I have selected this as my main objective to discuss. The film for the most part to me was overall effective. The characters did a great job portraying their roles, the scenes were set up nicely. In my opinion it gave an accurate discription of the kind of troubles that not only Jackie Robinson had to endure but also all persons of different racial backgrouds. Overall the movie was well put together and well structured. It simply could of included a much more realistic point of view of the hardships that all Black Americans encountered because of the effort of one man to help change a larger part of society.

A Discussion on the Effectiveness of the Movie The Jackie Robinson Story. (2022, Nov 23). Retrieved from https://papersowl.com/examples/a-discussion-on-the-effectiveness-of-the-movie-the-jackie-robinson-story/