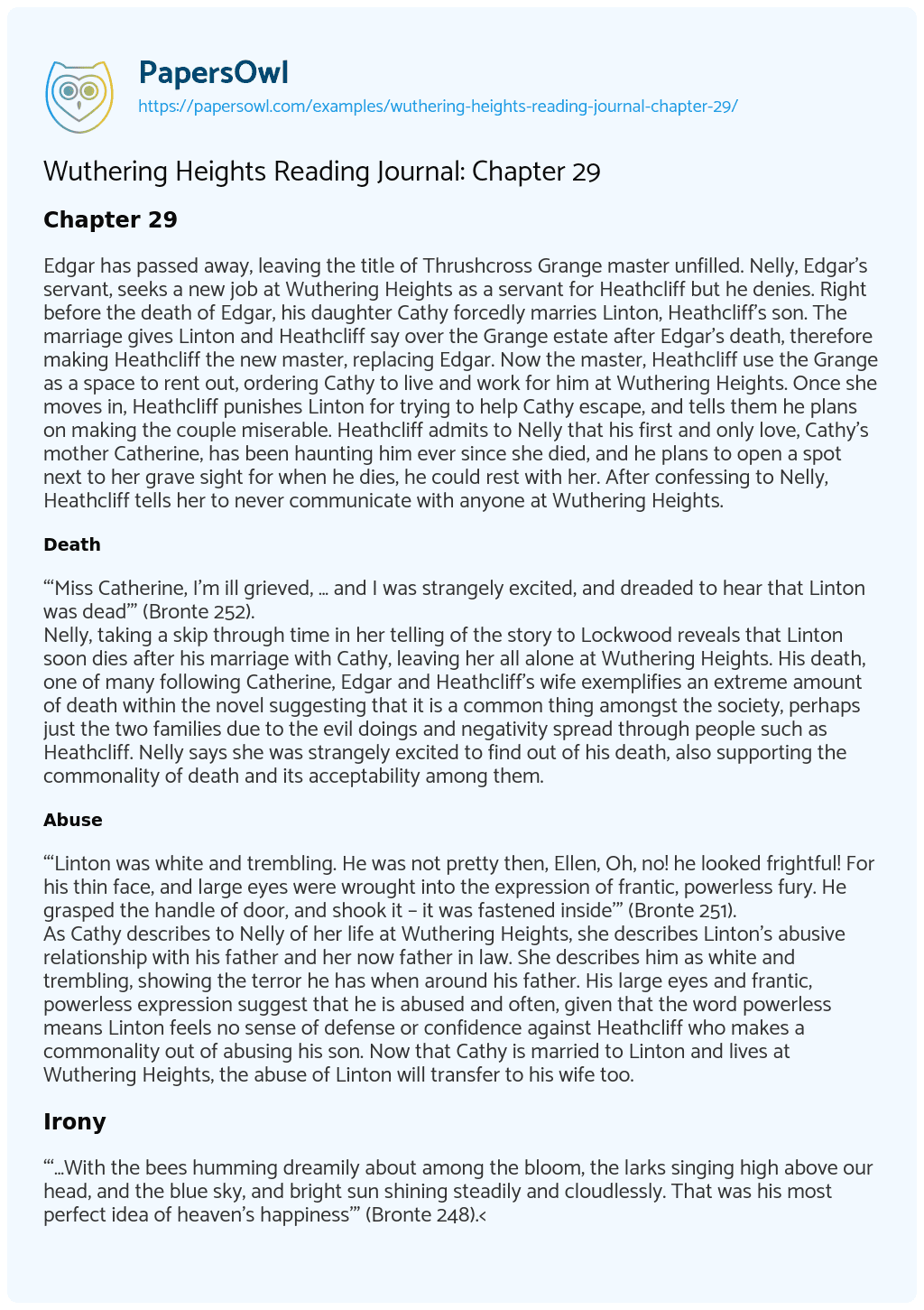 Edgar has passed away, leaving the title of Thrushcross Grange master unfilled. Nelly, Edgar’s servant, seeks a new job at Wuthering Heights as a servant for Heathcliff but he denies. Right before the death of Edgar, his daughter Cathy forcedly marries Linton, Heathcliff’s son. The marriage gives Linton and Heathcliff say over the Grange estate after Edgar’s death, therefore making Heathcliff the new master, replacing Edgar. Now the master, Heathcliff use the Grange as a space to rent out, ordering Cathy to live and work for him at Wuthering Heights. Once she moves in, Heathcliff punishes Linton for trying to help Cathy escape, and tells them he plans on making the couple miserable. Heathcliff admits to Nelly that his first and only love, Cathy’s mother Catherine, has been haunting him ever since she died, and he plans to open a spot next to her grave sight for when he dies, he could rest with her. After confessing to Nelly, Heathcliff tells her to never communicate with anyone at Wuthering Heights.

“‘Miss Catherine, I’m ill grieved, … and I was strangely excited, and dreaded to hear that Linton was dead’” (Bronte 252).
Nelly, taking a skip through time in her telling of the story to Lockwood reveals that Linton soon dies after his marriage with Cathy, leaving her all alone at Wuthering Heights. His death, one of many following Catherine, Edgar and Heathcliff’s wife exemplifies an extreme amount of death within the novel suggesting that it is a common thing amongst the society, perhaps just the two families due to the evil doings and negativity spread through people such as Heathcliff. Nelly says she was strangely excited to find out of his death, also supporting the commonality of death and its acceptability among them.

“‘Linton was white and trembling. He was not pretty then, Ellen, Oh, no! he looked frightful! For his thin face, and large eyes were wrought into the expression of frantic, powerless fury. He grasped the handle of door, and shook it – it was fastened inside’” (Bronte 251).
As Cathy describes to Nelly of her life at Wuthering Heights, she describes Linton’s abusive relationship with his father and her now father in law. She describes him as white and trembling, showing the terror he has when around his father. His large eyes and frantic, powerless expression suggest that he is abused and often, given that the word powerless means Linton feels no sense of defense or confidence against Heathcliff who makes a commonality out of abusing his son. Now that Cathy is married to Linton and lives at Wuthering Heights, the abuse of Linton will transfer to his wife too.

“‘…With the bees humming dreamily about among the bloom, the larks singing high above our head, and the blue sky, and bright sun shining steadily and cloudlessly. That was his most perfect idea of heaven’s happiness’” (Bronte 248).
Linton described his ideal life in heaven; everything bright, beautiful and positive, describing how he wished to have peace once he dies. This is ironic because one is supposed to strive for the perfect life while still living, not hope for it to come once in heaven. But his life now is a complete contrasting life of his ‘heaven’