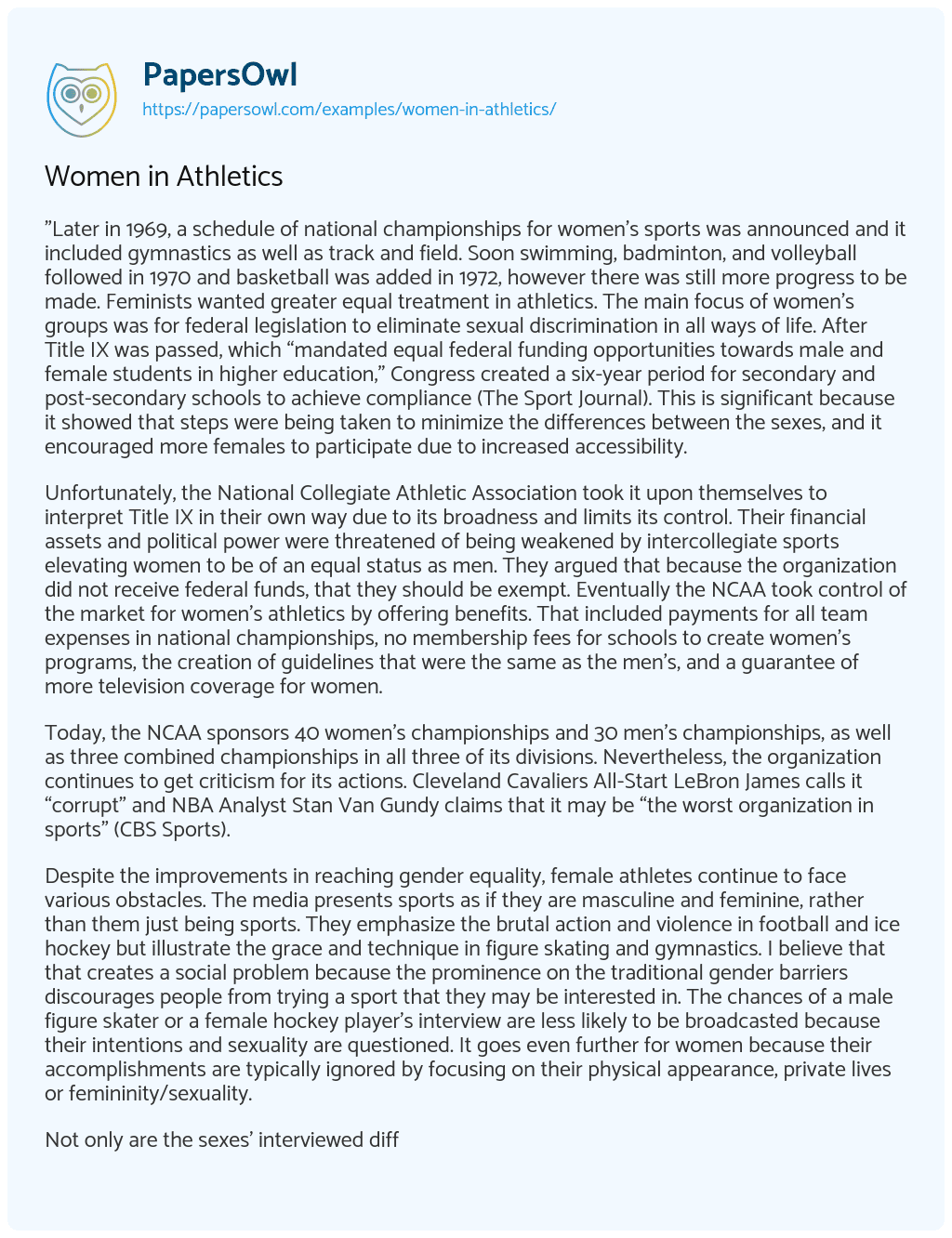 “Later in 1969, a schedule of national championships for women’s sports was announced and it included gymnastics as well as track and field. Soon swimming, badminton, and volleyball followed in 1970 and basketball was added in 1972, however there was still more progress to be made. Feminists wanted greater equal treatment in athletics. The main focus of women’s groups was for federal legislation to eliminate sexual discrimination in all ways of life. After Title IX was passed, which “mandated equal federal funding opportunities towards male and female students in higher education,” Congress created a six-year period for secondary and post-secondary schools to achieve compliance (The Sport Journal). This is significant because it showed that steps were being taken to minimize the differences between the sexes, and it encouraged more females to participate due to increased accessibility.

Unfortunately, the National Collegiate Athletic Association took it upon themselves to interpret Title IX in their own way due to its broadness and limits its control. Their financial assets and political power were threatened of being weakened by intercollegiate sports elevating women to be of an equal status as men. They argued that because the organization did not receive federal funds, that they should be exempt. Eventually the NCAA took control of the market for women’s athletics by offering benefits. That included payments for all team expenses in national championships, no membership fees for schools to create women’s programs, the creation of guidelines that were the same as the men’s, and a guarantee of more television coverage for women.

Today, the NCAA sponsors 40 women’s championships and 30 men’s championships, as well as three combined championships in all three of its divisions. Nevertheless, the organization continues to get criticism for its actions. Cleveland Cavaliers All-Start LeBron James calls it “corrupt” and NBA Analyst Stan Van Gundy claims that it may be “the worst organization in sports” (CBS Sports).

Despite the improvements in reaching gender equality, female athletes continue to face various obstacles. The media presents sports as if they are masculine and feminine, rather than them just being sports. They emphasize the brutal action and violence in football and ice hockey but illustrate the grace and technique in figure skating and gymnastics. I believe that that creates a social problem because the prominence on the traditional gender barriers discourages people from trying a sport that they may be interested in. The chances of a male figure skater or a female hockey player’s interview are less likely to be broadcasted because their intentions and sexuality are questioned. It goes even further for women because their accomplishments are typically ignored by focusing on their physical appearance, private lives or femininity/sexuality.

Not only are the sexes’ interviewed differently, but they are also shown differently when they are competing. Female athletes are subjected to “poorer quality of technical production, less overall coverage, and are demeaned as ‘girls’ while men are portrayed as ‘strong and powerful men’” (The Sport Journal). Television networks choose shots and angles that emphasize and exploit their bodies and sexuality. This not only discourages females from being presented, despite their athletic accomplishments, but it also sets the concept that women are only looked at for their bodies. That leads to people’s determination to reach what is deemed to be attractive qualities by any means possible.

While this many not seem like much to some individuals, women have had to fight through sexism and discrimination for centuries. Unequal broadcasting times, different ticket sale prices and restricting athletic uniforms are all examples of the unfairness that they see daily. Unfortunately, the media is blind to its role in shaping attitudes and values in regard to women’s sports. Some females feel obligated to sexualize their bodies in an effort to promote their sports, despite feminists claiming that the media is the only culprit. Some “athletes and marketing organizations that sell sex believe that it is the most powerful way to advertise and increase sales, ratings, and sponsorships” (The Sport Journal). However, this does not increase respect for the sports or the women themselves.

I believe that in order to make a difference in the attitudes and beliefs towards women’s sports, there needs to be more positive coverage to create new impressions. By showing an increased awareness and exposure of coverage, the interest would increase and prejudice would decrease simultaneously. If it had gained attention, then people would create emotional attachments to the players and teams, similar to football and baseball, and it would become more popular over time.

Even though society has progressed over the years, we still see sexism and discrimination today, but I believe that with time that will change. It can be seen that women’s involvement in sports and athletics has slowly developed, and I predict that many more advancements will come in the future. Centuries ago, opportunities and recognition for females were nearly nonexistent. However, due to feminists, equal right movements, and Title IX, women have found a place to compete in the world of sports alongside men.”