Women could Dare be Independent 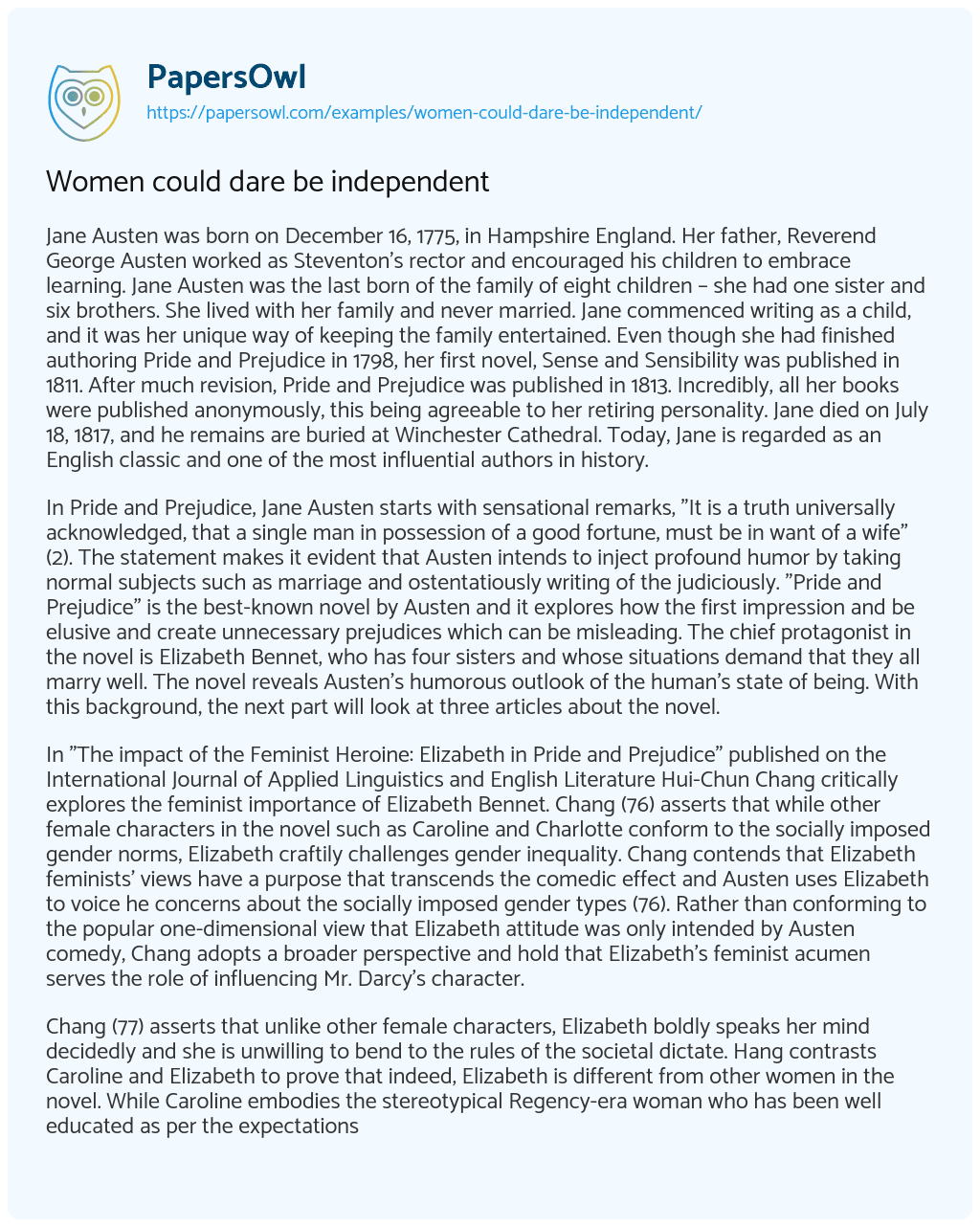 Jane Austen was born on December 16, 1775, in Hampshire England. Her father, Reverend George Austen worked as Steventon’s rector and encouraged his children to embrace learning. Jane Austen was the last born of the family of eight children – she had one sister and six brothers. She lived with her family and never married. Jane commenced writing as a child, and it was her unique way of keeping the family entertained. Even though she had finished authoring Pride and Prejudice in 1798, her first novel, Sense and Sensibility was published in 1811. After much revision, Pride and Prejudice was published in 1813. Incredibly, all her books were published anonymously, this being agreeable to her retiring personality. Jane died on July 18, 1817, and he remains are buried at Winchester Cathedral. Today, Jane is regarded as an English classic and one of the most influential authors in history.

In Pride and Prejudice, Jane Austen starts with sensational remarks, “It is a truth universally acknowledged, that a single man in possession of a good fortune, must be in want of a wife” (2). The statement makes it evident that Austen intends to inject profound humor by taking normal subjects such as marriage and ostentatiously writing of the judiciously. “Pride and Prejudice” is the best-known novel by Austen and it explores how the first impression and be elusive and create unnecessary prejudices which can be misleading. The chief protagonist in the novel is Elizabeth Bennet, who has four sisters and whose situations demand that they all marry well. The novel reveals Austen’s humorous outlook of the human’s state of being. With this background, the next part will look at three articles about the novel.

In “The impact of the Feminist Heroine: Elizabeth in Pride and Prejudice” published on the International Journal of Applied Linguistics and English Literature Hui-Chun Chang critically explores the feminist importance of Elizabeth Bennet. Chang (76) asserts that while other female characters in the novel such as Caroline and Charlotte conform to the socially imposed gender norms, Elizabeth craftily challenges gender inequality. Chang contends that Elizabeth feminists’ views have a purpose that transcends the comedic effect and Austen uses Elizabeth to voice he concerns about the socially imposed gender types (76). Rather than conforming to the popular one-dimensional view that Elizabeth attitude was only intended by Austen comedy, Chang adopts a broader perspective and hold that Elizabeth’s feminist acumen serves the role of influencing Mr. Darcy’s character.

Chang (77) asserts that unlike other female characters, Elizabeth boldly speaks her mind decidedly and she is unwilling to bend to the rules of the societal dictate. Hang contrasts Caroline and Elizabeth to prove that indeed, Elizabeth is different from other women in the novel. While Caroline embodies the stereotypical Regency-era woman who has been well educated as per the expectations of the society, she fails to value intellectual achievements, Elizabeth is motivated to pursue intellectual achievements despite not having gotten a typical female education. Chang (82) argues that Elizabeth’s feminist qualities come to light when contrasted against the female foils in the novel. Change concludes that Elizabeth epitomizes how women can assert their independence and still attract a desirable husband.

In “Marriage in Jane Austen’s Pride and Prejudice” published on the International Journal of Media Culture and Literature, Amjad Azam Mohammed analyzes the situation of marriage in the Victoria age and how women were approaching it. Mohammed (59) argues that during the Victorian age, women had different reasons for conducting marriage including enhancing their social status and securing their future. During the era in which Austen write the novel, marriage was undergoing a great shift from an aristocratic institution to a socially accepted institution that could identify the values of women. Mohammed (60) asserts that the transition can be traced in the novel through the character of Elizabeth who defies the status quo and asserts her independence of thoughts and actions.

Mohammed (62) argues that Pride and Prejudice provide a real-life experience into the institution of marriage during the Victorian era. Women’s were seen as men’s property. Women were denied rights to inherit or possess anything left by their family for them. Also, women did not have a voice in society as well as in her house. Austen suggests that many marriages were built on the material needs of women, but she encourages women to be independent and engage in marriage based on love (Mohammed 66). Mohammed concludes that despite varying reasons for marriages, Pride and Prejudice paints marriage as an institution that was experiencing inevitable progress.

In “The Portrayal of Male Fools in Jane Austen Pride and Prejudice” published on English Language and Literature Studies, Ali Albashir Mohammed Al-Haj examines how men are treated in Austen’s novel “Pride and Prejudice”. Al-Haj (44) asserts that Austen’s work took an interest in people, instead of ideas and the success of each work is contingent upon the exact presentation of human situations. This infers that Austen was not a social reformer, rather she was a keen observer who wrote stories to remind people and society of its shortcomings. According to Al-Haj (47), the character of male fools in Pride and Prejudice are fixed characters, who do not change throughout. Al-Haj concludes that a male character in the novel is a fool to the extent that one is seen as a portraiture of the worthless man who does wrong professionally but is devoid of moral awareness.

In sum, Jane Austen is a renowned English classic and an influential writer in history. Pride and Prejudice captures Austen’s sense of humor and reveals how the author is meticulous in using comic to castigate her society for oppressing its women. Chung authored the first article that was explored and who sought to examine feminism in the novel through the person of Elizabeth. The major conclusion of the article is that women could dare be independent and still attract a desirable husband. The second article examines in the paper was authored by Mohammed, and it examines the marriage institution. Mohammed concludes that the Victorian themes that characterized the marriage institution were being threatened by a new breed of women such as Elizabeth who ushered in a new way that society could look at its women. The third article was written by Al-Haj who examines male fools in the novel. Al-Haj concludes that male fools in the novel are the male characters who promote status quo. Ultimately, the three articles bring new ways of looking at Austen’s Pride and Prejudice.

Women could dare be independent. (2019, Jul 02). Retrieved from https://papersowl.com/examples/women-could-dare-be-independent/

The Issues of Gender in Jane Austen’s Novels

The Effect of Jane Austen

Women’s Rights in Pride and Prejudice