The Issues of Gender in Jane Austen’s Novels 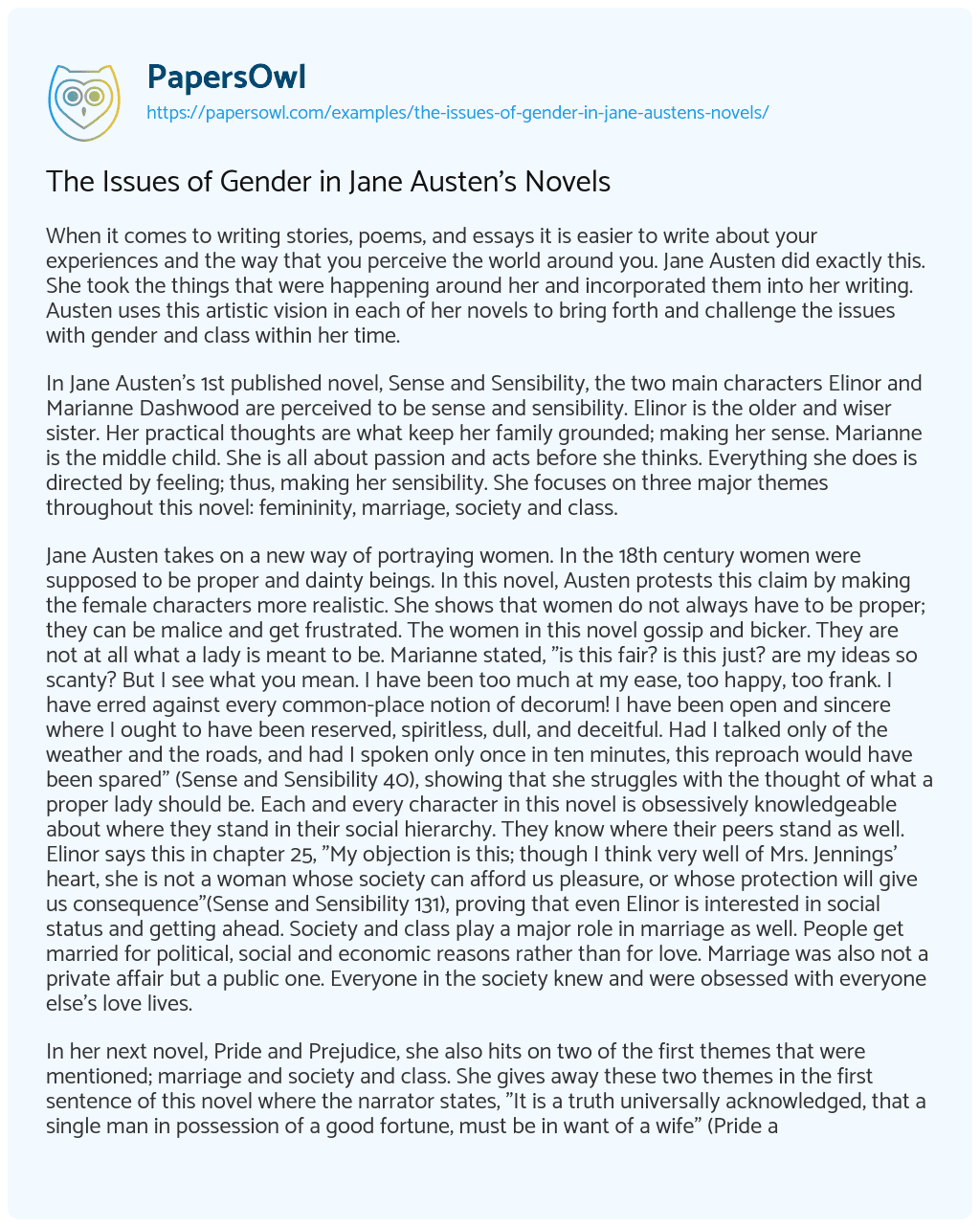 When it comes to writing stories, poems, and essays it is easier to write about your experiences and the way that you perceive the world around you. Jane Austen did exactly this. She took the things that were happening around her and incorporated them into her writing. Austen uses this artistic vision in each of her novels to bring forth and challenge the issues with gender and class within her time.

In Jane Austen’s 1st published novel, Sense and Sensibility, the two main characters Elinor and Marianne Dashwood are perceived to be sense and sensibility. Elinor is the older and wiser sister. Her practical thoughts are what keep her family grounded; making her sense. Marianne is the middle child. She is all about passion and acts before she thinks. Everything she does is directed by feeling; thus, making her sensibility. She focuses on three major themes throughout this novel: femininity, marriage, society and class.

Jane Austen takes on a new way of portraying women. In the 18th century women were supposed to be proper and dainty beings. In this novel, Austen protests this claim by making the female characters more realistic. She shows that women do not always have to be proper; they can be malice and get frustrated. The women in this novel gossip and bicker. They are not at all what a lady is meant to be. Marianne stated, “is this fair? is this just? are my ideas so scanty? But I see what you mean. I have been too much at my ease, too happy, too frank. I have erred against every common-place notion of decorum! I have been open and sincere where I ought to have been reserved, spiritless, dull, and deceitful. Had I talked only of the weather and the roads, and had I spoken only once in ten minutes, this reproach would have been spared” (Sense and Sensibility 40), showing that she struggles with the thought of what a proper lady should be. Each and every character in this novel is obsessively knowledgeable about where they stand in their social hierarchy. They know where their peers stand as well. Elinor says this in chapter 25, “My objection is this; though I think very well of Mrs. Jennings’ heart, she is not a woman whose society can afford us pleasure, or whose protection will give us consequence”(Sense and Sensibility 131), proving that even Elinor is interested in social status and getting ahead. Society and class play a major role in marriage as well. People get married for political, social and economic reasons rather than for love. Marriage was also not a private affair but a public one. Everyone in the society knew and were obsessed with everyone else’s love lives.

In her next novel, Pride and Prejudice, she also hits on two of the first themes that were mentioned; marriage and society and class. She gives away these two themes in the first sentence of this novel where the narrator states, “It is a truth universally acknowledged, that a single man in possession of a good fortune, must be in want of a wife” (Pride and Prejudice 1). Society and class always go hand in hand with marriage in the 18th century. A woman’s only option was to get married and it was the most important decision that she could made. She could not move out of the house unmarried and she could not build her own career. Divorce was also not an option unless it was for a serious reason. Money was often a problem for people and for the Bennett sisters it was their main problem. They were very poor and the only way to obtain money is through inheritance or marriage. This is why most people got married in their society; rarely was it for love. Austen sums up marriage in her time with the character, Charlotte Bennett’s view on marriage, “Happiness in marriage is entirely a matter of chance. If the dispositions of the parties are ever so well known to each other or ever so similar beforehand, it does not advance their felicity in the least. They always continue to grow sufficiently unlike afterwards to have their share of vexation; and it is better to know as little as possible of the defects of the person with whom you are to pass your life (Pride and Prejudice 15). Charlotte manages to hit the view of marriage in the 18th century right on the head.

Austen’s 3rd novel, Mansfield Park, is different than her other novels because her heroine is quiet rather than spunky and outspoken. Although this is true, the novel still has themes that mainly revolve around gender roles and marriage. Women once again are supposed to be married; their future depends on it. The woman takes all of the blame if any affair or scandal happens within the marriage. Gender roles are influenced by three major things: birth order, money, and class. “Girls should be quiet and modest” (Mansfield Park), this quote gives a little view to how women were supposed to be in the 18th century. Marriage, once again, was a way for women to climb the social ladder. Love had no place in marriage.

Jane Austen is an author that brought her realities into her novels. She chose to use her writings to get certain beliefs across. She wrote these novels in the age of major criticism; a time where a woman’s opinion was not seen as a valid one. This is why her first few novels were anonymously published. She has been an inspiration to many artists and she will continue to do so over time. Her impact is due to how she used her artistic vision to bring forth the issues of gender and class in her time.

The Issues of Gender in Jane Austen’s Novels. (2019, May 27). Retrieved from https://papersowl.com/examples/the-issues-of-gender-in-jane-austens-novels/

Jane Austen the Author and Feminist

About the Pride and Prejudice by Jane Austen

Life and Times of Jane Austen

The Effect of Jane Austen