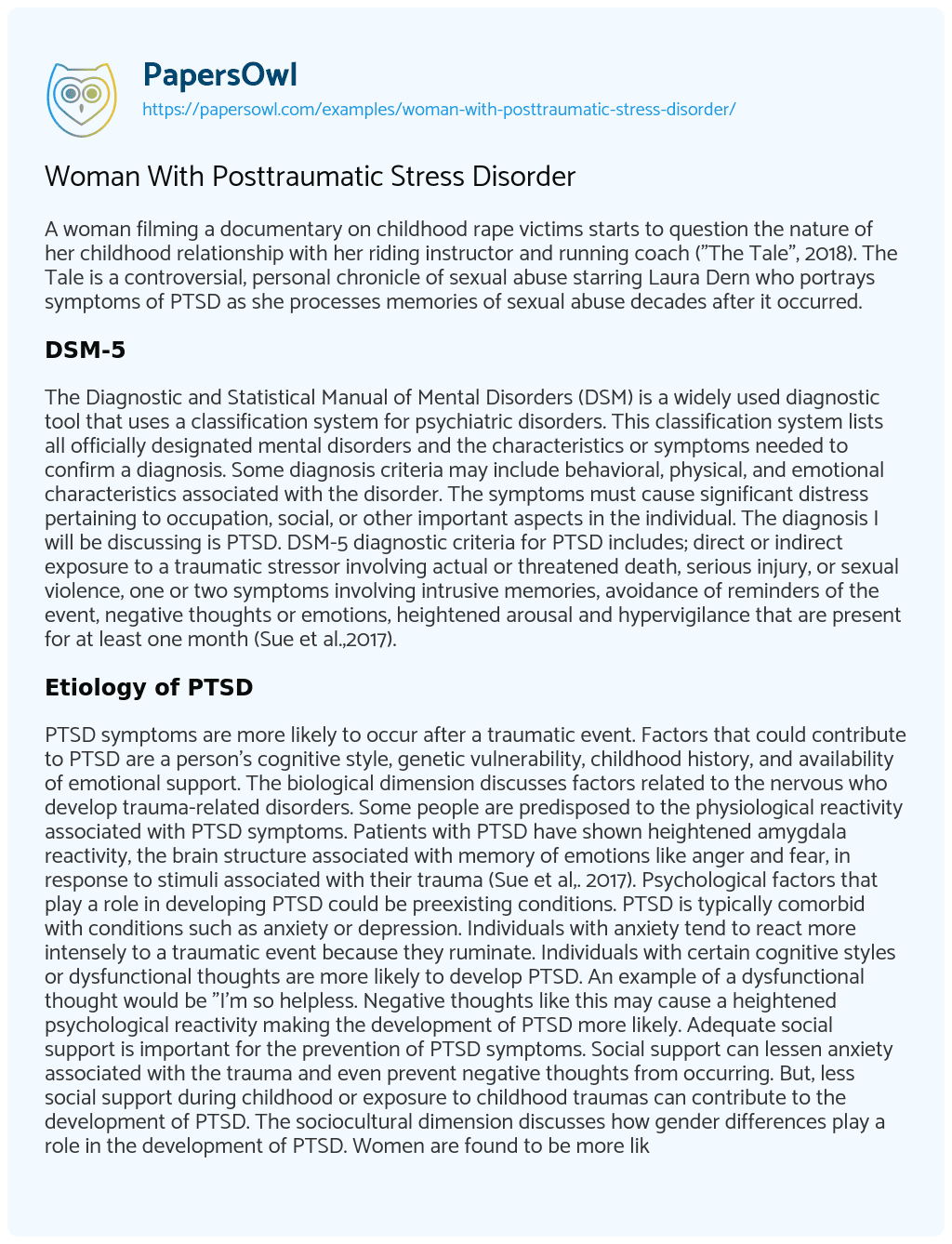 A woman filming a documentary on childhood rape victims starts to question the nature of her childhood relationship with her riding instructor and running coach (“The Tale”, 2018). The Tale is a controversial, personal chronicle of sexual abuse starring Laura Dern who portrays symptoms of PTSD as she processes memories of sexual abuse decades after it occurred.

The Diagnostic and Statistical Manual of Mental Disorders (DSM) is a widely used diagnostic tool that uses a classification system for psychiatric disorders. This classification system lists all officially designated mental disorders and the characteristics or symptoms needed to confirm a diagnosis. Some diagnosis criteria may include behavioral, physical, and emotional characteristics associated with the disorder. The symptoms must cause significant distress pertaining to occupation, social, or other important aspects in the individual. The diagnosis I will be discussing is PTSD. DSM-5 diagnostic criteria for PTSD includes; direct or indirect exposure to a traumatic stressor involving actual or threatened death, serious injury, or sexual violence, one or two symptoms involving intrusive memories, avoidance of reminders of the event, negative thoughts or emotions, heightened arousal and hypervigilance that are present for at least one month (Sue et al.,2017).

PTSD symptoms are more likely to occur after a traumatic event. Factors that could contribute to PTSD are a person’s cognitive style, genetic vulnerability, childhood history, and availability of emotional support. The biological dimension discusses factors related to the nervous who develop trauma-related disorders. Some people are predisposed to the physiological reactivity associated with PTSD symptoms. Patients with PTSD have shown heightened amygdala reactivity, the brain structure associated with memory of emotions like anger and fear, in response to stimuli associated with their trauma (Sue et al,. 2017). Psychological factors that play a role in developing PTSD could be preexisting conditions. PTSD is typically comorbid with conditions such as anxiety or depression. Individuals with anxiety tend to react more intensely to a traumatic event because they ruminate. Individuals with certain cognitive styles or dysfunctional thoughts are more likely to develop PTSD. An example of a dysfunctional thought would be “I’m so helpless. Negative thoughts like this may cause a heightened psychological reactivity making the development of PTSD more likely. Adequate social support is important for the prevention of PTSD symptoms. Social support can lessen anxiety associated with the trauma and even prevent negative thoughts from occurring. But, less social support during childhood or exposure to childhood traumas can contribute to the development of PTSD. The sociocultural dimension discusses how gender differences play a role in the development of PTSD. Women are found to be more likely than men to experience the development of PTSD as well as major depressive disorder (Hapke, Rumpf, John, & Meyer, 2006).

According to DSM-5, a diagnosis of PTSD requires that an individual exhibit one or two symptoms from each symptom cluster. The symptoms from the major symptom clusters include: intrusive symptoms-intrusive thoughts or flashbacks of the trauma, avoidance- avoidance of thoughts, feelings, or physical reminders associated with the trauma, as well as places, events, or objects that trigger distressing memories of the experience, negative alterations in mood or cognition- difficulty remembering details of the events; limited interest in important things, arousal, and changes in reactivity- engaging in reckless or self-destructive behavior. The symptoms must be present for at least one month (Sue et al., 2017)

Jennifer Fox (Laura Dern) would receive the diagnosis of PTSD because she exhibits at least one or two of the symptoms from each symptom cluster. Throughout the film, Jennifer experiences flashbacks of her childhood, and the trauma she endured. These flashbacks often included scenes from her time at the horse-riding camp and intimate interactions with her riding instructor and running coach. When Jennifer is reminded of this time in her childhood, she is avoidant of this reminded. She was often in denial about the trauma saying “It wasn’t like that and “It was the ’70s and people didn’t talk about it like that. Physical reminders such as sexual intercourse with her husband would trigger flashbacks of the trauma. Her mother found a paper she had written for class about her time at riding camp containing information about the trauma. Jennifer tried to recall details about her childhood, and her time spent at camp, but had difficulty. She reached out to the other girls who had also stayed at the camp. They reminded her that she had a special relationship with the riding instructor and running coach. Her mother recalled that she was thirteen years old and looked very young for her age. Jennifer also lost interest in her work project in which she was filming a documentary on childhood rape victims. She had also become extremely aggravated with her husband with caused trouble in their relationship. Jennifer engages in reckless and self-destructive behavior when she locates and comes into contact with her former running coach at party. Jennifer publicly confronts her former coach about the sexual assault in front of his colleagues (“The Tale”, 2018).

Jennifer did not attempt to seek any professional treatment throughout the film; however, Jennifer did seek social support through her mother. This is not a form of treatment, but it can reduce the severity of anxiety associated with trauma. I would recommend Jennifer seek professional treatment to help treat her PTSD. I would recommend a combination of antidepressants along with trauma-focused cognitive-behavioral therapy (TF-CBT). Certain antidepressants will show moderate effectiveness in patients by altering serotonin levels, decreasing reactivity in amygdala, and desensitizing the fear network. The effectiveness is less than sixty percent in PTSD patients. TF-CBT helps patients identify dysfunctional cognitions about the traumatic event and beliefs about themselves. These therapies help address dysfunctional thinking. This therapy also educates about PTSD and practices mindfulness. These treatments together could reduce symptoms and treat Jennifer’s PTSD.

I came to the prognosis of PTSD for Jennifer because of the symptoms she exhibits throughout the film. I also came to this prognosis because of the social factors associated with PTSD. In the film, Jennifer grew up in a family with many younger siblings. It is likely that there was a lack of social support due to this fact. A lack of social support during childhood can contribute to PTSD. Jennifer’s gender also makes her twice as likely of developing PTSD as she is a woman. Biological and psychological factors as a development for this prognosis are not evident in the film.

The portrayal of PTSD was accurately depicted by actress Laura Dern. I thought it was interesting that this story was not carried with the character for years, rather she realized what had happened to her decades later. The defensive statements she uses throughout the film define the symptom criteria of avoidance. Jennifer’s outburst toward her former running coach felt genuine as she engaged in self-destructive and reckless behavior and immediately regretted that decision as she retreated to the bathroom to vomit.

The Tale is a raw and disturbing movie about sexual assault, and a woman coming to terms with it years later. This movie illustrates the truth about childhood sexual abuse which is horrific to watch. This movie also discusses the power of consent and age. Jennifer, at the age of thirteen, believed she could make her own decisions regarding sexual intercourse and sexual relationships. Throughout the film, Jennifer denies the construct of victimhood as she believed she made her own choices and accepted the “abuse.

PTSD is a condition characterized by flashbacks, hypervigilance, avoidance, and other symptoms as a result of an exposure to extreme trauma. The DSM-5 is a classification system that uses symptom criteria to diagnose patients with psychiatric disorders. PTSD can develop as a result of biological, psychological, social, and/or sociocultural factors. Jennifer Fox, played by actress Laura Dern, portrays symptoms that would likely diagnose her with PTSD.

Posttraumatic Stress Disorder and its Pecularities