Who is Actually the Biggest Fan of your Food Waste? 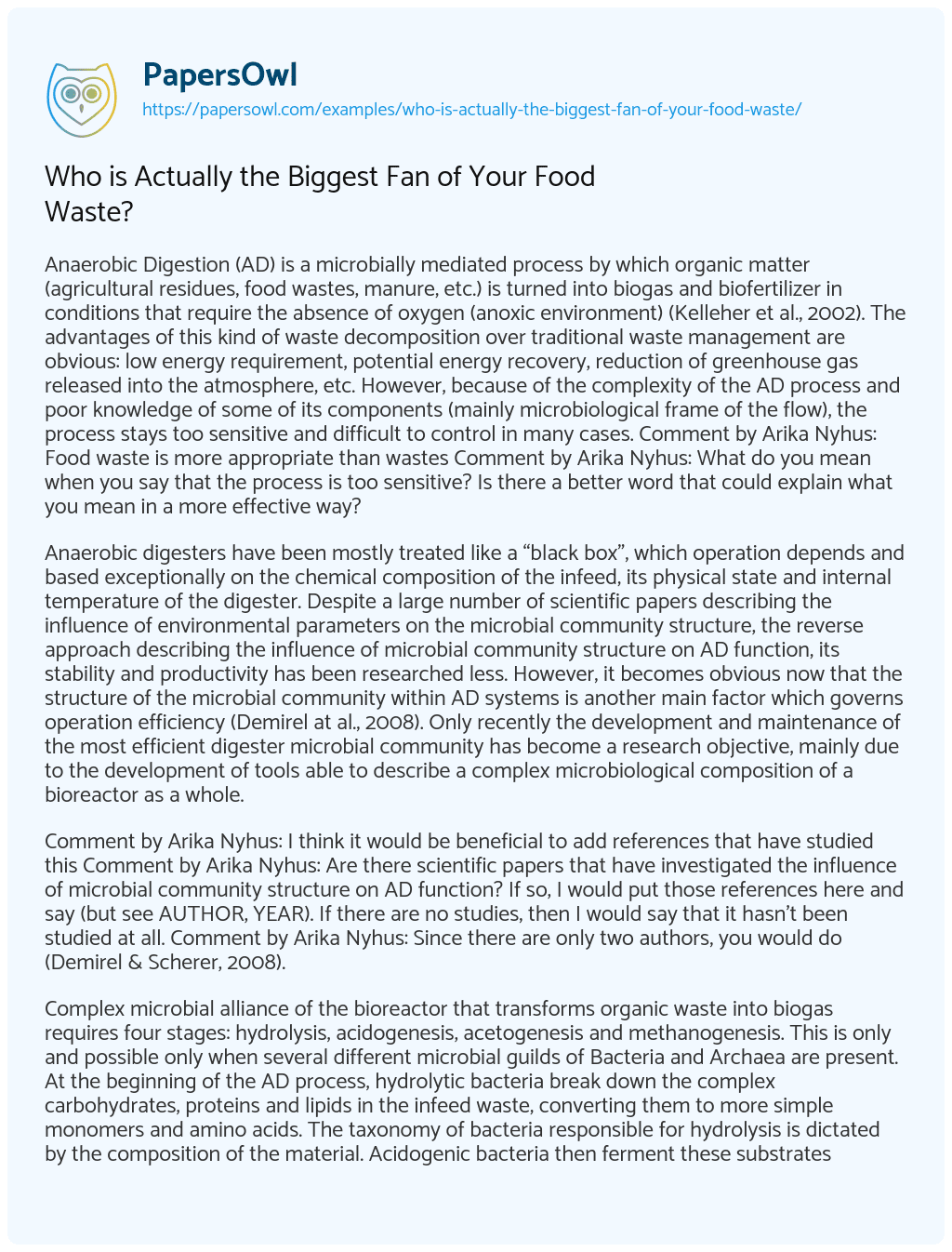 Anaerobic Digestion (AD) is a microbially mediated process by which organic matter (agricultural residues, food wastes, manure, etc.) is turned into biogas and biofertilizer in conditions that require the absence of oxygen (anoxic environment) (Kelleher et al., 2002). The advantages of this kind of waste decomposition over traditional waste management are obvious: low energy requirement, potential energy recovery, reduction of greenhouse gas released into the atmosphere, etc. However, because of the complexity of the AD process and poor knowledge of some of its components (mainly microbiological frame of the flow), the process stays too sensitive and difficult to control in many cases. Comment by Arika Nyhus: Food waste is more appropriate than wastes Comment by Arika Nyhus: What do you mean when you say that the process is too sensitive? Is there a better word that could explain what you mean in a more effective way?

Anaerobic digesters have been mostly treated like a “black box”, which operation depends and based exceptionally on the chemical composition of the infeed, its physical state and internal temperature of the digester. Despite a large number of scientific papers describing the influence of environmental parameters on the microbial community structure, the reverse approach describing the influence of microbial community structure on AD function, its stability and productivity has been researched less. However, it becomes obvious now that the structure of the microbial community within AD systems is another main factor which governs operation efficiency (Demirel at al., 2008). Only recently the development and maintenance of the most efficient digester microbial community has become a research objective, mainly due to the development of tools able to describe a complex microbiological composition of a bioreactor as a whole.

Complex microbial alliance of the bioreactor that transforms organic waste into biogas requires four stages: hydrolysis, acidogenesis, acetogenesis and methanogenesis. This is only and possible only when several different microbial guilds of Bacteria and Archaea are present. At the beginning of the AD process, hydrolytic bacteria break down the complex carbohydrates, proteins and lipids in the infeed waste, converting them to more simple monomers and amino acids. The taxonomy of bacteria responsible for hydrolysis is dictated by the composition of the material. Acidogenic bacteria then ferment these substrates into volatile fatty acids (VFA). Typically the most common VFAs at that stage are acetate, propionate, and butyrate. Acetogenic Bacteria then convert propionate, butyrate, and formate to acetate via oxidation, producing H2 and CO2 in the process. At the final stage, Hydrogenotrophic Archaea process the H2 produced by bacteria during previous stages to produce methane.

Equally comfortable conditions for all of the alliances of bacteria involved and balance, between the biochemical activities between them is necessary to successfully digest organic waste and produce biogas. (Weiland, 2010). If the balance is disrupted and the digester is missing Bacteria and Archaea that can fill the niches of the AD process, the reduction of VFAs catabolization will occur and methane production will stop. , tTo avoid this, it is crucial to study and predict the composition and pathways of interaction between all the parties involved in the process. Comment by Arika Nyhus: I would stay consistent with your commas you use. For example, in the previous texts you haven’t been using commas before and but here you do. I would choose one or the other. Comment by Arika Nyhus: This sentence is a bit confusing to me. Also, remove the period after biogas. Comment by Arika Nyhus: I do not recognize this word. You could be right but want to discuss. Comment by Arika Nyhus: Period instead of comma and start a new sentence.

In order to be able to determine the structure of the microbial community of the AD process, several methods are available. In the past, researchers that were trying to characterize microorganisms that produce methane were only relying on culture techniques. With a traditional cultivation-based method, only a small part of the microbial composition of the bioreactor can be described, due to demanding culture requirements. In the case of syntrophic organisms that are present in AD process, reproduction of a pure culture for description is impossible. However, progress in DNA sequencing technology, have made analysis of AD microbial structures possible on all four stages of the process, giving comprehension of the changes and composition in bioreactors. (Levén et al., 2007). At this point, researchers have just begun to utilize the information pertaining to collective microbial genome structure to understand and to predict its influence on a digester performance. Comment by Arika Nyhus: Would be a good place to add references so readers could check out these older methods. Comment by Arika Nyhus: Remove comma Comment by Arika Nyhus: Since there is only three authors, you would write out all of their names. Then in subsequent texts (if you were to use the same reference again), you would write (Leven et al., 2007).

The collective genomes of microbes in the environmental sample is called the ‘metagenome’ and studies are called ‘metagenomics’ (Handelsman et al., 1998). Metagenomics main goal is to study uncultured organisms and to be able to understand the true diversity, functions and cooperation in the collective microbiological communities that can be found in soil, digestive system of animals, water, anaerobic digesters, etc. In the present, a sample can be obtained and directly sequenced from an AD environment. The entire communities are analyzed, without isolating and culturing distinct organisms with the power of genome analysis. Current research into increasing the output and capacity of anaerobic digesters is focused on microbial community characterization and monitoring and this kind of research is accelerating. (Vanwonterghem et al., 2014). Technologies such as Illumina/Solexa are now able to deliver now more sequenced data than ever before in comparison with the conventional Sanger sequencing, for example. (Zhou et al., 2011). Also, Illumina/Solexa technology does not require cloning of the DNA before sequencing, this way one of the main biases in this kind of sampling is avoided. (St-Pierre et al., 2013).

However there are several technologies that can be used, Illumina is currently the state of the art when it comes to 16S rRNA gene sequencing. It surpasses the previous 454 technology most notably due to its lower costs, higher accuracy and greater throughput (Sinclair et al. 2015) It is likely the most powerful and trustworthy tool for description of the metagenome of an anaerobic digester of any kind at this point. It will be a very useful tool to describe microbial composition of an anaerobic benchtop digesters in a laboratory setting that are mimicking all processes of an industrial size bioreactors and use this knowledge to maximize biogas outputs and stability of similar systems in the future. Comment by Arika Nyhus: Since there are five authors, list all of their names. Then use (Handelsman et al., 1998) after that. It is when you have six or more authors that you don’t have to introduce all of the names the first time you cite them.

Demirel, B., and Scherer, P., 2008, The roles of acetotrophic and hydrogenotrophic methanogens during anaerobic conversion of biomass to methane – a review. Environmental Science and Bio/Technology, v. 7, p. 173–190, doi: 10.1007/s11157-008-9131-1. Comment by Arika Nyhus: Do not bold the title of the articles. Do italicize the journal or book that the article came from

Who is Actually the Biggest Fan of Your Food Waste?. (2019, Dec 07). Retrieved from https://papersowl.com/examples/who-is-actually-the-biggest-fan-of-your-food-waste/