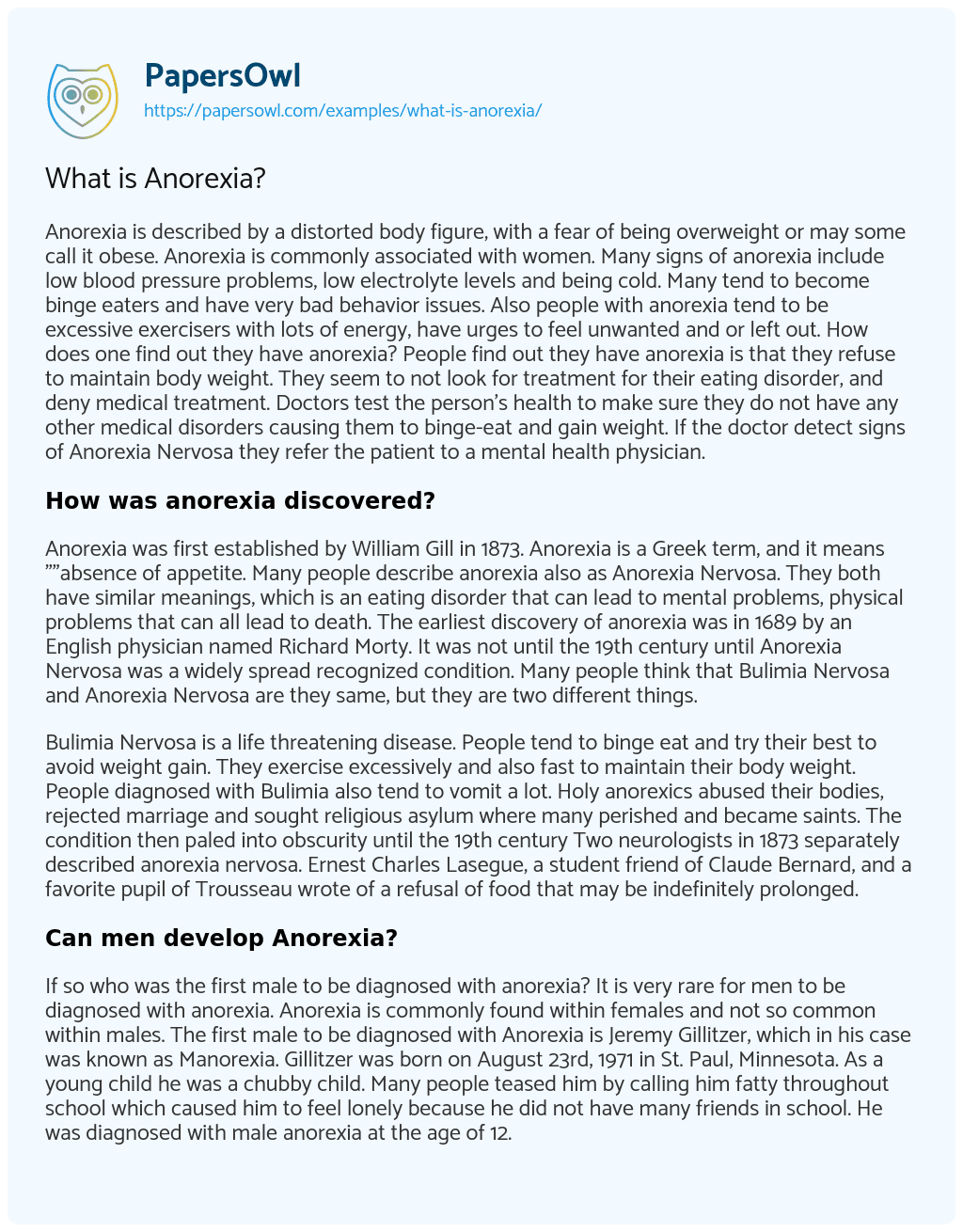 Anorexia is described by a distorted body figure, with a fear of being overweight or may some call it obese. Anorexia is commonly associated with women. Many signs of anorexia include low blood pressure problems, low electrolyte levels and being cold. Many tend to become binge eaters and have very bad behavior issues. Also people with anorexia tend to be excessive exercisers with lots of energy, have urges to feel unwanted and or left out. How does one find out they have anorexia? People find out they have anorexia is that they refuse to maintain body weight. They seem to not look for treatment for their eating disorder, and deny medical treatment. Doctors test the person’s health to make sure they do not have any other medical disorders causing them to binge-eat and gain weight. If the doctor detect signs of Anorexia Nervosa they refer the patient to a mental health physician.

How was anorexia discovered?

Anorexia was first established by William Gill in 1873. Anorexia is a Greek term, and it means “”absence of appetite. Many people describe anorexia also as Anorexia Nervosa. They both have similar meanings, which is an eating disorder that can lead to mental problems, physical problems that can all lead to death. The earliest discovery of anorexia was in 1689 by an English physician named Richard Morty. It was not until the 19th century until Anorexia Nervosa was a widely spread recognized condition. Many people think that Bulimia Nervosa and Anorexia Nervosa are they same, but they are two different things.

Bulimia Nervosa is a life threatening disease. People tend to binge eat and try their best to avoid weight gain. They exercise excessively and also fast to maintain their body weight. People diagnosed with Bulimia also tend to vomit a lot. Holy anorexics abused their bodies, rejected marriage and sought religious asylum where many perished and became saints. The condition then paled into obscurity until the 19th century Two neurologists in 1873 separately described anorexia nervosa. Ernest Charles Lasegue, a student friend of Claude Bernard, and a favorite pupil of Trousseau wrote of a refusal of food that may be indefinitely prolonged.

What is Anorexia?. (2019, Jun 25). Retrieved from https://papersowl.com/examples/what-is-anorexia/

The Real Skinny on Anorexia a Merciless Battle with the Mirror