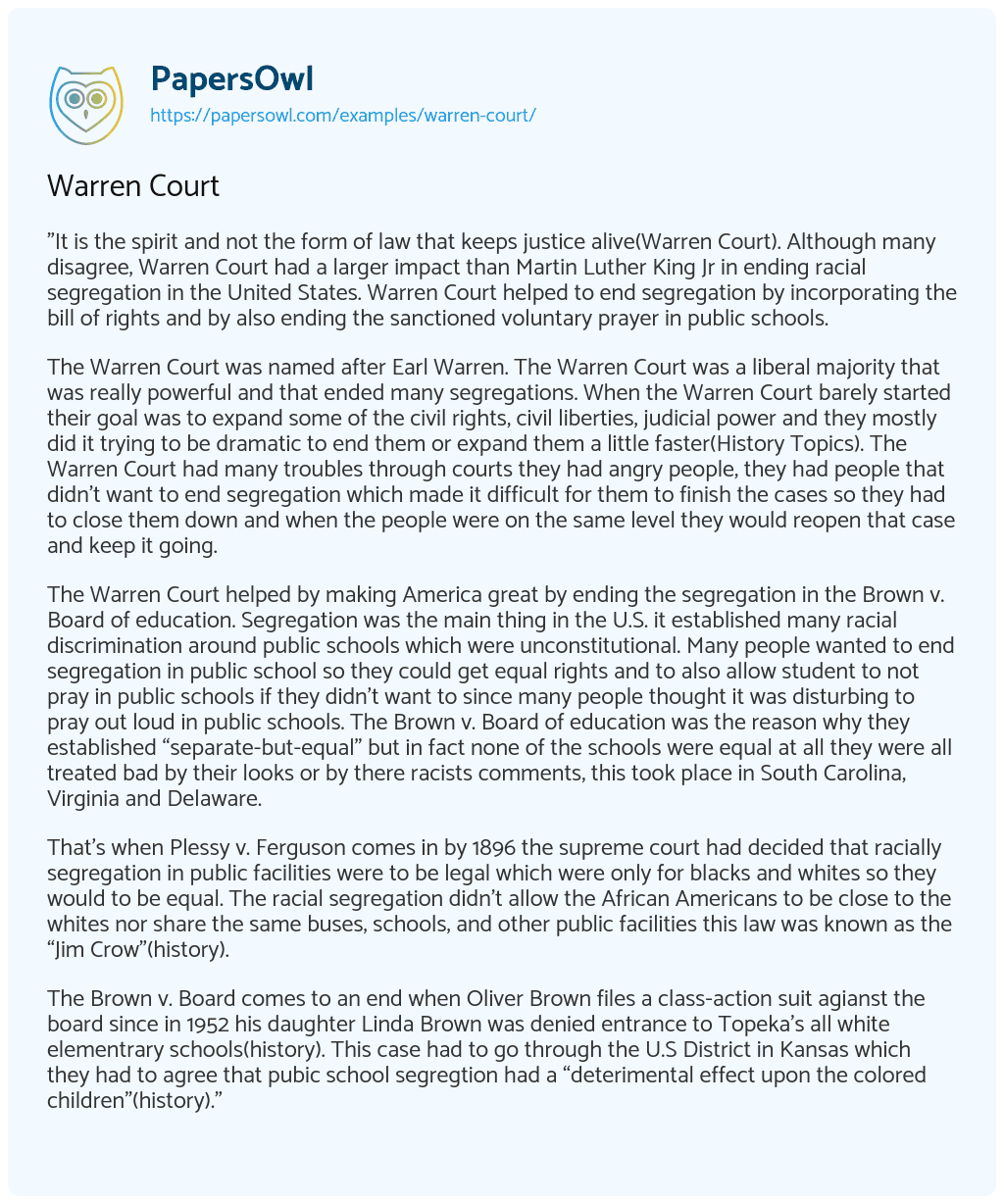 “It is the spirit and not the form of law that keeps justice alive(Warren Court). Although many disagree, Warren Court had a larger impact than Martin Luther King Jr in ending racial segregation in the United States. Warren Court helped to end segregation by incorporating the bill of rights and by also ending the sanctioned voluntary prayer in public schools.

The Warren Court was named after Earl Warren. The Warren Court was a liberal majority that was really powerful and that ended many segregations. When the Warren Court barely started their goal was to expand some of the civil rights, civil liberties, judicial power and they mostly did it trying to be dramatic to end them or expand them a little faster(History Topics). The Warren Court had many troubles through courts they had angry people, they had people that didn’t want to end segregation which made it difficult for them to finish the cases so they had to close them down and when the people were on the same level they would reopen that case and keep it going.

The Warren Court helped by making America great by ending the segregation in the Brown v. Board of education. Segregation was the main thing in the U.S. it established many racial discrimination around public schools which were unconstitutional. Many people wanted to end segregation in public school so they could get equal rights and to also allow student to not pray in public schools if they didn’t want to since many people thought it was disturbing to pray out loud in public schools. The Brown v. Board of education was the reason why they established “separate-but-equal” but in fact none of the schools were equal at all they were all treated bad by their looks or by there racists comments, this took place in South Carolina, Virginia and Delaware.

That’s when Plessy v. Ferguson comes in by 1896 the supreme court had decided that racially segregation in public facilities were to be legal which were only for blacks and whites so they would to be equal. The racial segregation didn’t allow the African Americans to be close to the whites nor share the same buses, schools, and other public facilities this law was known as the “Jim Crow”(history).

The Brown v. Board comes to an end when Oliver Brown files a class-action suit agianst the board since in 1952 his daughter Linda Brown was denied entrance to Topeka’s all white elementrary schools(history). This case had to go through the U.S District in Kansas which they had to agree that pubic school segregtion had a “deterimental effect upon the colored children”(history).”