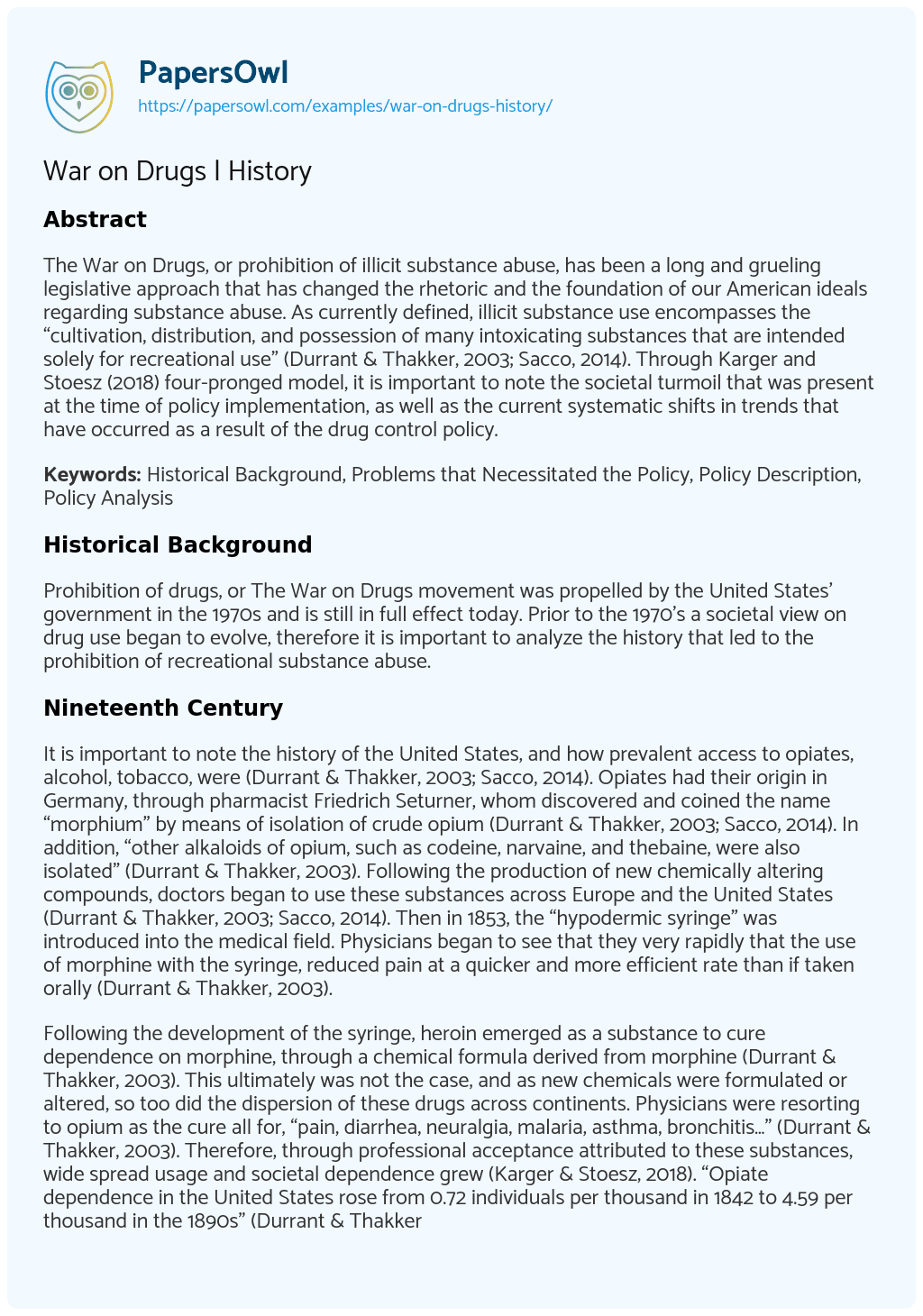 The War on Drugs, or prohibition of illicit substance abuse, has been a long and grueling legislative approach that has changed the rhetoric and the foundation of our American ideals regarding substance abuse. As currently defined, illicit substance use encompasses the “cultivation, distribution, and possession of many intoxicating substances that are intended solely for recreational use” (Durrant & Thakker, 2003; Sacco, 2014). Through Karger and Stoesz (2018) four-pronged model, it is important to note the societal turmoil that was present at the time of policy implementation, as well as the current systematic shifts in trends that have occurred as a result of the drug control policy.

Prohibition of drugs, or The War on Drugs movement was propelled by the United States’ government in the 1970s and is still in full effect today. Prior to the 1970’s a societal view on drug use began to evolve, therefore it is important to analyze the history that led to the prohibition of recreational substance abuse.

Following the development of the syringe, heroin emerged as a substance to cure dependence on morphine, through a chemical formula derived from morphine (Durrant & Thakker, 2003). This ultimately was not the case, and as new chemicals were formulated or altered, so too did the dispersion of these drugs across continents. Physicians were resorting to opium as the cure all for, “pain, diarrhea, neuralgia, malaria, asthma, bronchitis…” (Durrant & Thakker, 2003). Therefore, through professional acceptance attributed to these substances, wide spread usage and societal dependence grew (Karger & Stoesz, 2018). “Opiate dependence in the United States rose from 0.72 individuals per thousand in 1842 to 4.59 per thousand in the 1890s” (Durrant & Thakker, 2003).

It is also important to note societal shifts and the role immigration played at the turn of the century (Trattner, 1994). While opium was widely used throughout European countries, opium use for recreational purposes began to be widely attributed to individuals of Chinese descent (Durrant & Thakker, 2003). However as Chinese immigration to the United States rose, the use of opium smoking became prevalent within some geographical regions (Durrant & Thakker, 2003). Recreational opioid use became an action epitomized solely by Chinese immigrants, who sought cultural identity through means of association, yet later became attributed to American youth (Durrant & Thakker, 2003).

The election of President Richard Nixon, marked the commencement of the War on Drugs Continuing with society’s disapproval of drugs, he pushed for legislation that provided the foundation for the legislation in place today. Similar to Taft, years before him, Nixon declared the War on Drugs. “The Controlled Substances Act (CSA), enacted as Title II of the Comprehensive Drug Abuse Prevention and Control Act of 1970 (P.L. 91-513)” (Durrant & Thakker, 2003; Sacco, 2014). This legislation’s objective was to substitute all already enacted legislation, with only one general statute that highlighted all previous legislation (Durrant & Thakker, 2003; Sacco, 2014; Karger & Stoesz, 2018). The CSA, is the legal foundation that continues to be enforced by the Drug Enforcement Administration (DEA) today (Durrant & Thakker, 2003; Sacco, 2014). This substantial legislation uniquely classified all substances under a hierarchy of how potent they are. “(1) how dangerous they are considered to be, (2) their potential for abuse and addiction, and (3) whether they have legitimate medicinal use” (). This primarily targeted the increasing spread of heroin use throughout the country.

Following the establishment of this substantial legislation, the Drug Enforcement Administration Agency emerged in 1973 (Sacco, 2014). The Drug Enforcement Administration Agency was tasked with stringent enforcement of the CSA. Nixon advocated the importance of collaborating with other Department of Justice agencies, such as the Federal Bureau of Investigation (FBI) (Sacco, 2014). With a 74.9 million dollar budget and 1,470 DEA special agents, the DEA was tasked with enforcing the CSA and upholding the following governmental goals of deescalating rivalries, working with the FBI, the single “focal point for coordinating Federal drug enforcement efforts with state and local authorities as well as with foreign police forces”, “safeguarding against corruption and enforcement abuses”, in addition to gathering information relating to “international narcotics smuggling” (Sacco, 2014).

As the United States began to take a firm stance on drug abuse, through the 1960 emerged an altered form of cocaine, commonly known as “crack” (Durrant & Thakker, 2003; Sacco, 2014). This sent waves of alarms and American society called for administrative action: “27 % of the American public felt that drugs…was the most important problem…compared to four years prior when 2%…” (Sacco, 2014). Therefore, Regan continued the rhetoric held by the previous administration. Then, the number of convictions regarding drug offenses escalated significantly, “…51% of the increase in the total number of persons convicted of all federal offenses” (Sacco, 2014). Similarly, convictions relating to minor possession of substances increase from “302 convictions in 1980 to 1,353 in 1982” (Sacco, 2014).

As Regan entered the close of his Presidency, emerged two Anti-Drug Abuse Acts of 1986 and 1988. The Anti-Drug Abuse Act of 1986, heightened the criminalization of illegal altered substance distribution adding criminal penalties for “possession of a controlled substance”. In addition, it established incarceration penalties related to drug trafficking, through the creation of mandatory prison sentences founded on the amount of the substance at the time of possession (Durrant & Thakker, 2003; Sacco, 2014). The Anti-Drug Abuse Act of 1988, established the Office of National Drug Control Policy (ONDCP). the Director of the institution of ONDCP held the ability to create policies and goals (Sacco, 2014). Regan entered an era heavily reliant on incarceration as a means of lowering illicit substance abuse.

Through a heightened societal notion regarding substance abuse, we can visualize the perpetual call for legislative action. Substance abuse and addiction catalyzed the era of the War on Drugs, yet substance abuse has persisted. While the goals of the policy implemented under the Nixon Administration sought to relieve rising addiction rates, it has given way to significant societal injustices encompassed by disparities in incarceration rates.

As legislation developed regarding drug penalties and mandatory sentences, so to did prison rates. Today, according to the Federal Bureau of Prisons (2018), the incarceration rate due to drug associated offenses is 46 % (Federal Bureau of Prisons, 2018). Out of the 168,687 current inmates about 77,649 inmates are incarcerated due to drug offenses (Federal Bureau of Prisons, 2018). According to the Council of State Governments (2017), “about 80% of offenders abuse drugs or alcohol, 50% of prisoners are clinically addicted to one or more drugs” (Freeman & The Council of State Governments, 2017). It is also important to take into account significant studies have been done on race, ethnicity, and imprisonment.

This inability to receive services could lend itself to an increased rise in recidivism rates. In analyzing recidivism rates related to drug abusers, or drug trafficking offenses, 50% of drug trafficking inmates that were released in 2005 were rearrested (United States Sentencing Commission, 2017). Rearrests related to trafficking of Powder Cocaine, Crack Cocaine, Heroin, Marijuana, and Methamphetamine (United States Sentencing Commission, 2017). Furthermore, the Bureau of Justice Statistics, analyzed the recidivism patterns in 30 states from prisoners released in 2005, resulting in about 67.8% of released prisoners being rearrested for a new crime within three years and 76.6 % of released prisoners rearrested within five years (Durose, Cooper, Snyder, & Bureau of Justice Statistics, 2014). Of those rearrested within five years, 76.9% were drug offenders (Durose, Cooper, Snyder, & Bureau of Justice Statistics, 2014). These incarceration patterns and rates only symbolize a dilemma that has resulted from drug policy.

Although the consequences the implementation of the War on Drugs legislation are identified above, certain strengths can also be identified. One being deterrence of selling illicit drugs to minors. This aids in averting addiction for the children of our society. According to the United States Sentencing Commission (2016), legislation establishes the following in the protection of children regarding illicit drugs: “endangering human life, distribution to infants, minors, children, juveniles, and those under 18 years of age, and distribution in school zones”. Another strength is that current legislation prohibits the sale or distribution to pregnant women (United States Sentencing Commission, 2016). Finally, although our current incarceration rates are partly due to the current drug legislation, it is important to note that many addiction treatments services are only accessed through parole and probation officers for poverty-stricken inmates who cannot afford treatment themselves. (Rosenberg, Groves, & Blankenship, 2016)

The populations severely affected by the War on Drugs and the legislative rhetoric on illicit substance abuse are the incarcerated population and the populations that are addicted to drugs whether illicit or prescription drugs. The intended goals by the CSA and the Drug Enforcement Administration of “cracking down on drugs”, has only lent itself to the rise of inmates and addiction rates. The federal legislation coupled with societal stigma associated with substance abuse, has perpetuated and inhibited services for this particular population. Therefore, if we reframe this mentality, and restructure the drug associated crime, the federal government can provide significant services for inmates that have landed in prison as a result of illicit substance abuse.

If we reanalyze what occurred during the Prohibition Era, it is as though history has repeated itself, especially seeing states shift towards legalizing Cannabis. The legalization of Marijuana, in certain states lowers incarceration, and in return reduces societal costs attributed to those arrests. The cost per inmate or prisoner in 2015 was $14,780 to $69,355 (Freeman & The Council of State Governments, 2017). Continuing to put drug offenders who possess and abuse drugs deemed illegal only creates a vicious cycle of recidivism. Treating drug addiction then causes less of a demand in illicit substances or illegally made substances, that drive deaths and incarceration rates. If funding were to be redistributed from enforcement to treatment, which is a 30.9 % then it would address the population that currently abuses substances, while not completely defunding the entities that do enforce legislation. Through a redistribution of funds addiction rates and incarceration rates related to drug offenses can potentially decrease. Therefore, though a legislative shift, redistribution of funding, and societal mentality we can continue to combat drug addiction and shift the conception brought on by earlier legislation of the War on Drugs.

The History of Drugs and the War on Drugs