Vaccines should be Mandatory 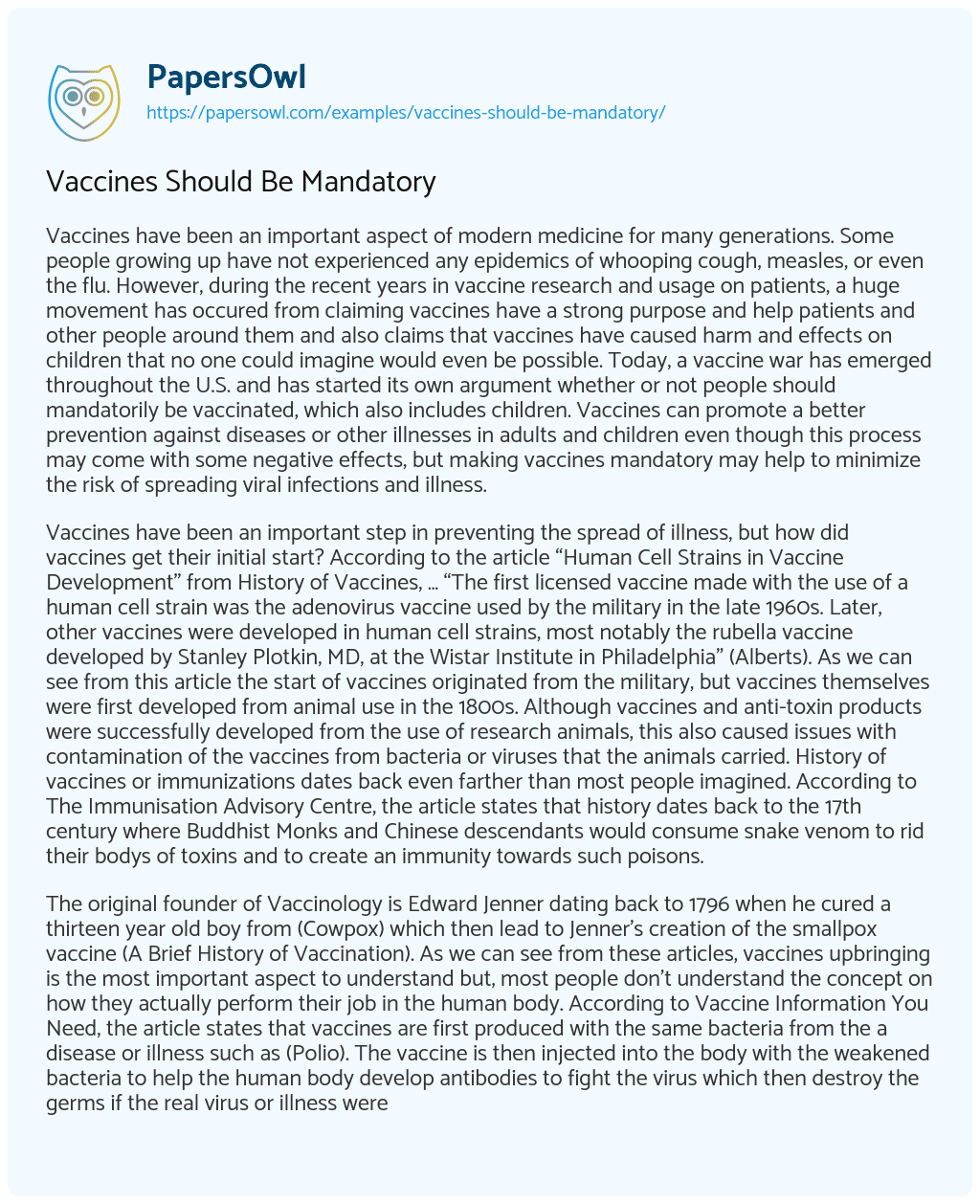 Vaccines have been an important aspect of modern medicine for many generations. Some people growing up have not experienced any epidemics of whooping cough, measles, or even the flu. However, during the recent years in vaccine research and usage on patients, a huge movement has occured from claiming vaccines have a strong purpose and help patients and other people around them and also claims that vaccines have caused harm and effects on children that no one could imagine would even be possible. Today, a vaccine war has emerged throughout the U.S. and has started its own argument whether or not people should mandatorily be vaccinated, which also includes children. Vaccines can promote a better prevention against diseases or other illnesses in adults and children even though this process may come with some negative effects, but making vaccines mandatory may help to minimize the risk of spreading viral infections and illness.

Vaccines have been an important step in preventing the spread of illness, but how did vaccines get their initial start? According to the article “Human Cell Strains in Vaccine Development” from History of Vaccines, … “The first licensed vaccine made with the use of a human cell strain was the adenovirus vaccine used by the military in the late 1960s. Later, other vaccines were developed in human cell strains, most notably the rubella vaccine developed by Stanley Plotkin, MD, at the Wistar Institute in Philadelphia” (Alberts). As we can see from this article the start of vaccines originated from the military, but vaccines themselves were first developed from animal use in the 1800s. Although vaccines and anti-toxin products were successfully developed from the use of research animals, this also caused issues with contamination of the vaccines from bacteria or viruses that the animals carried. History of vaccines or immunizations dates back even farther than most people imagined. According to The Immunisation Advisory Centre, the article states that history dates back to the 17th century where Buddhist Monks and Chinese descendants would consume snake venom to rid their bodys of toxins and to create an immunity towards such poisons.

The original founder of Vaccinology is Edward Jenner dating back to 1796 when he cured a thirteen year old boy from (Cowpox) which then lead to Jenner’s creation of the smallpox vaccine (A Brief History of Vaccination). As we can see from these articles, vaccines upbringing is the most important aspect to understand but, most people don’t understand the concept on how they actually perform their job in the human body. According to Vaccine Information You Need, the article states that vaccines are first produced with the same bacteria from the a disease or illness such as (Polio). The vaccine is then injected into the body with the weakened bacteria to help the human body develop antibodies to fight the virus which then destroy the germs if the real virus or illness were to invade the body (Vaccine Basics). As we can see from this article that the substances included in vaccines are not nearly enough to harm an individual, but most people are unaware of how vaccines are truly a safer route to take when they include the actual bacteria or virus.

Basic concepts on how vaccines work in our body has been provided to the world, people still want true evidence to support the claim that they actually do work. Today there has been plenty of tests provided with vaccine use and their effectiveness and including recent statistics to provide proof of progress from vaccine usage. According to The Immunization Partnership the article states that the leading cause of death from disease was from Influenza which killed a total of 32,806 people between 1998-2007. Vaccines have also saved over 42,000 lives which is a larger number than people being saved by seat belts and child restraints combined (4 Striking Statistics About Vaccination). Not only do these statistics serve as a positive point for vaccines, but also providing people with proof of their positive effects and what they can do for a large amount of the U.S. population and other countries as well.

Today research is still involved as to how vaccines can help fight diseases such as the Ebola outbreak epidemic which occurred in early 2014. According to Issues & Controversies the article states, “Scientists have yet to develop a vaccine or cure for Ebola, and the virus poses a particular challenge to researchers because of its high rate of mutability. Care for Ebola patients largely consists of treating symptoms to prevent dehydration and malnutrition” (Ebola: Are Urgent Measures Necessary to Prevent an Ebola Outbreak in the United States). As we can see from this article, scientists are still testing today whether they can provide immunizations towards this deadly virus. Even if scientists can not provide a vaccine for Ebola it is still possible to use other drug testing such as one called “ZMapp” which was given to seven Ebola victims and five had successfully recovered. Unfortunately, even with such evidence provided for vaccines success, there is still doubts as to whether they function properly and whether they should be given to anyone.

Today in recent news and articles all over the world, there has become a new epidemic which has been referred to the “vaccine war” in today’s society. Not only has this caused people to believe vaccines pose a threat to anyone receiving them, but also false accusations of causing mental issues in children. According to Issues & Controversies the article states, “In 2007, Jenny McCarthy, a former model and television host, began claiming that vaccines had caused autism in her son. McCarthy’s assertions made her a leader of the anti-vaccine movement, along with other prominent media figures, including businessman Donald Trump, who became president of the United States in 2017” (Mandatory Vaccines: Should Vaccines be Mandatory?). As we can see from this article it is evident that people will take information from any big media figures and believe it without any evidence to backup their claims against vaccine usage. Even still, other people believe that it would be wrong to give their children vaccines because they contain “chemicals” or “toxins”. According to the article from Issues & Controversies it also states that many anti-vaxxers believe that some vaccines contain toxic substances such as: Mercury, formaldehyde, and aluminum.

Medical experts testified that some vaccines may include some of those substances, but only in a small amount that cannot harm the body in any way (Mandatory Vaccines: Should Vaccines be Mandatory?). Not only are we seeing false claims of vaccines and what they do to the body, but also how people are deeming them as dangerous. The article also states that there has been no scientific evidence that autism is caused from vaccines and many anti-vaxxers have been trying to the link both claims together and it still has not worked. Today both Donald Trump and McCarthy are still both getting backlash from their anti-vaxx beliefs along with other people in society who deem vaccines dangerous and unsafe. (Mandatory Vaccines: Should Vaccines be Mandatory?). Even though from this evidence of accusations that were found to be false, vaccines today can still hold some side effects for patients.

Like any other drug, vaccines hold a potential list of side effects that are involved when being injected. According to an article from NHS it claims that most common side effects involved with vaccines are: Pain or swelling, fatigue, headache, and muscle pains. Other rare side effects are anaphylactic reactions which is an allergic reaction to the vaccine(s) which would promote immediate medical attention if it occured (Vaccine Side Effects). As we can see from the article, vaccines do not pose such a harmful threat because most vaccines contain side effects very common to most over the counter drugs that people may take everyday. According to the article “HPV Vaccination” it states, “A small number of patients receiving the HPV vaccine have experienced syncope (fainting) or seizures.

Patients receiving the vaccine should be observed for 15 minutes after receiving each dose” (Laberge et.al). The article also states that, vaccines such as HPV are said to be long lasting, but women will be required for cervical screening because it does not protect against all HPV types such as cervical cancer (Laberge et. al). As we can see every vaccine has side effects, but not all are the same or provide the same protection. Many health professionals will take precautions when a severe side effect erupts. Another downfall is mandatory vaccines could interfere with religion which is constitutionally protected, but where do we draw the line where vaccines are most needed for everyone incase of a potential outbreak? Even though these side effects are involved, it is still clear that this is a safer route to take to protect individuals to the most harmful substance that attacks the body which is diseases or viruses.

In conclusion, vaccines can be extremely beneficial to providing people with a safer and healthier lifestyle against diseases or viruses. Immunization is the key to staying healthy for both children and adults who risk becoming infected without it. Diseases have dropped in rates all over the world, thanks to the use of vaccines. Vaccines are affordable and easily accessible for everyone’s benefit. Choosing to not vaccinate, preventable diseases can and will return. Even though some vaccines can contain side effects it is better to consider the positive effects of making vaccines mandatory so that it can help stop outbreaks from happening. Vaccination is not only a personal choice but a choice to also protect your loved ones. The benefits we can see from vaccine usage outweigh the risks that most people see. To find more information about vaccines visit The Centers for Disease Control and Prevention (CDC) website https://www.cdc.gov/vaccines/index.html.

Vaccines Should Be Mandatory. (2021, Mar 23). Retrieved from https://papersowl.com/examples/vaccines-should-be-mandatory/

Do Vaccines Cause Autism

The Importance of Animal Models in Vaccines