Why the United States should Go to a Predominantly Socialist Society 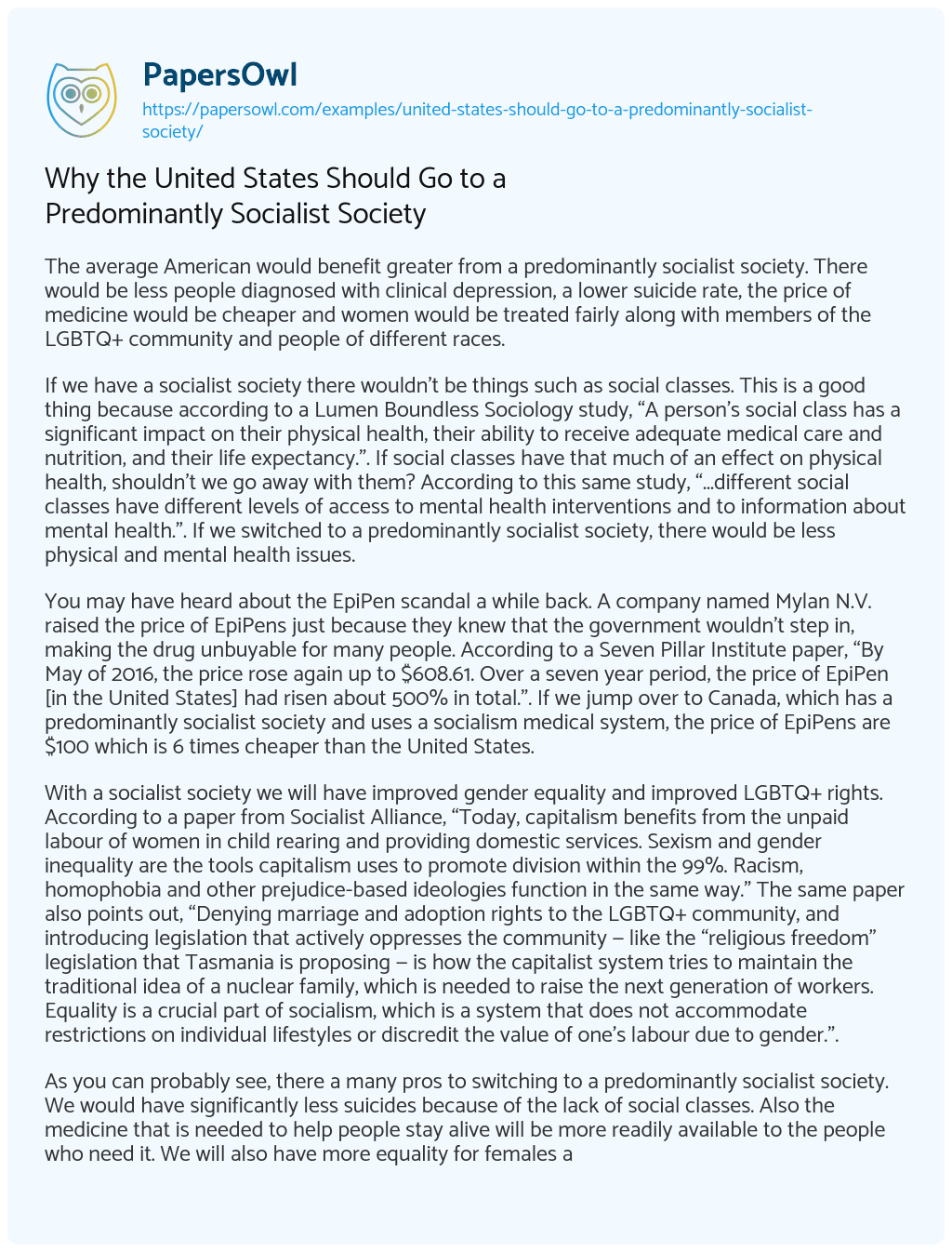 The average American would benefit greater from a predominantly socialist society. There would be less people diagnosed with clinical depression, a lower suicide rate, the price of medicine would be cheaper and women would be treated fairly along with members of the LGBTQ+ community and people of different races.

If we have a socialist society there wouldn’t be things such as social classes. This is a good thing because according to a Lumen Boundless Sociology study, “A person’s social class has a significant impact on their physical health, their ability to receive adequate medical care and nutrition, and their life expectancy.”. If social classes have that much of an effect on physical health, shouldn’t we go away with them? According to this same study, “…different social classes have different levels of access to mental health interventions and to information about mental health.”. If we switched to a predominantly socialist society, there would be less physical and mental health issues.

With a socialist society we will have improved gender equality and improved LGBTQ+ rights. According to a paper from Socialist Alliance, “Today, capitalism benefits from the unpaid labour of women in child rearing and providing domestic services. Sexism and gender inequality are the tools capitalism uses to promote division within the 99%. Racism, homophobia and other prejudice-based ideologies function in the same way.” The same paper also points out, “Denying marriage and adoption rights to the LGBTQ+ community, and introducing legislation that actively oppresses the community — like the “religious freedom” legislation that Tasmania is proposing — is how the capitalist system tries to maintain the traditional idea of a nuclear family, which is needed to raise the next generation of workers. Equality is a crucial part of socialism, which is a system that does not accommodate restrictions on individual lifestyles or discredit the value of one’s labour due to gender.”.

As you can probably see, there a many pros to switching to a predominantly socialist society. We would have significantly less suicides because of the lack of social classes. Also the medicine that is needed to help people stay alive will be more readily available to the people who need it. We will also have more equality for females and LGBTQ+ members.

The people that agree with capitalism will say that those who work hard, deserve the money they make. Some people may argue that with capitalism, the harder you work, the more money you make. For example, if you work really hard to become a doctor, you will make approximately $80 per hour. If you don’t work hard and end up working at McDonalds you’ll make $8.90 per hour. This is a not fair way to treat citizens. To “work hard” and become a doctor, you need money to start off with. Where do you get this money from? You can’t make a lot of money and work hard without first having a lot of money and socialism will fix this issue. In conclusion, I hope you can see that a predominantly socialist society is the way to go. In the next election, vote for the person with socialist ideas. Society will thank you.

Why the United States Should Go to a Predominantly Socialist Society. (2021, Mar 19). Retrieved from https://papersowl.com/examples/united-states-should-go-to-a-predominantly-socialist-society/

Equal Society in the United States

Transracial Adoption in the United States