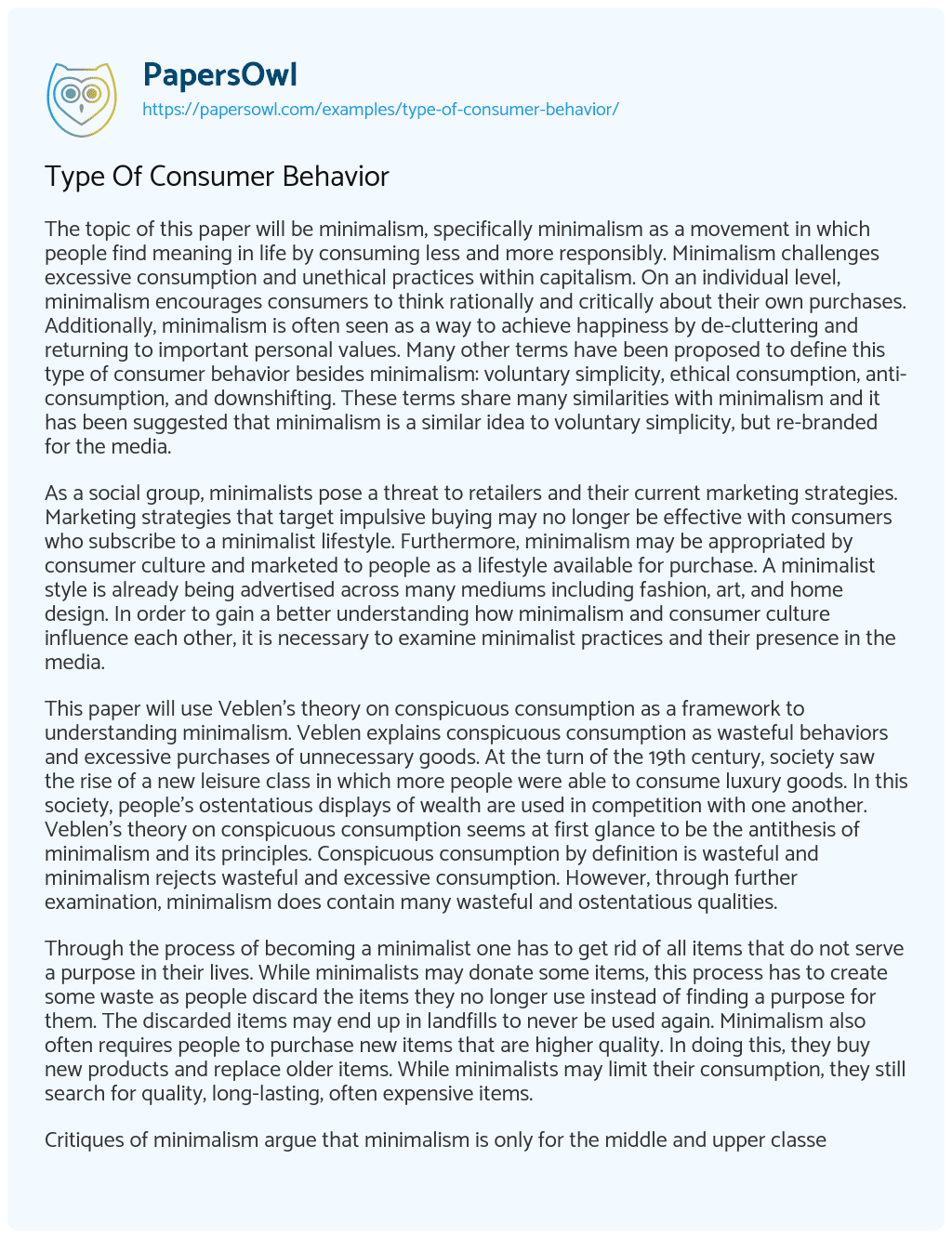 The topic of this paper will be minimalism, specifically minimalism as a movement in which people find meaning in life by consuming less and more responsibly. Minimalism challenges excessive consumption and unethical practices within capitalism. On an individual level, minimalism encourages consumers to think rationally and critically about their own purchases. Additionally, minimalism is often seen as a way to achieve happiness by de-cluttering and returning to important personal values. Many other terms have been proposed to define this type of consumer behavior besides minimalism: voluntary simplicity, ethical consumption, anti-consumption, and downshifting. These terms share many similarities with minimalism and it has been suggested that minimalism is a similar idea to voluntary simplicity, but re-branded for the media.

As a social group, minimalists pose a threat to retailers and their current marketing strategies. Marketing strategies that target impulsive buying may no longer be effective with consumers who subscribe to a minimalist lifestyle. Furthermore, minimalism may be appropriated by consumer culture and marketed to people as a lifestyle available for purchase. A minimalist style is already being advertised across many mediums including fashion, art, and home design. In order to gain a better understanding how minimalism and consumer culture influence each other, it is necessary to examine minimalist practices and their presence in the media.

Through the process of becoming a minimalist one has to get rid of all items that do not serve a purpose in their lives. While minimalists may donate some items, this process has to create some waste as people discard the items they no longer use instead of finding a purpose for them. The discarded items may end up in landfills to never be used again. Minimalism also often requires people to purchase new items that are higher quality. In doing this, they buy new products and replace older items. While minimalists may limit their consumption, they still search for quality, long-lasting, often expensive items.

Critiques of minimalism argue that minimalism is only for the middle and upper classes as those in poverty cannot afford to replace or part with the possessions they already own. Veblen writes, “No merit would accrue from the consumption of the bare necessaries of life, except by comparison with the abjectly poor who fall short even of the subsistence minimum…”  According to Veblen, those who only consume the necessities are not engaging in conspicuous consumption. However, when minimalists are compared to those that are truly impoverished, perhaps they can be seen as conspicuous consumers. Minimalists are wasteful relative to when they are compared to the poor who can barely meet their needs. Not only was a minimalist able to meet all of their needs, they were able to give away the goods they deemed unnecessary.

Veblen discusses the impact of tastes as being created by elites and passed down to lower classes. Minimalism may be a taste that is cultivated among the wealthiest classes and is now being marketed to other classes. For instance, many high profile people have subscribed to the idea of minimalism such as Steve Jobs and Mark Zuckerberg . High profile people hold considerable influence over the media and market.

Veblen also addresses the ways in which people compare themselves in the leisure class as invidious comparison. Veblen writes that comparison exists beyond just monetary wealth, and can exist “in various directions in the manifestation of moral, physical, intellectual, aesthetic force”. Minimalism is often associated with other practices such as vegetarianism/veganism, being environmentally conscious, and spirituality/ religion. A display of invidious comparison could exist between minimalists and other consumers as minimalists may represent a moral lifestyle that others wish to attain.

Dopierala describes minimalism as a new mode of consumption known as conscious consumption, and also as a style of consumption (2017). This source provides a background of minimalism and the controversy that surrounds the discipline. Minimalism is characterized in many ways such as a therapy, marketing trend, or anti-consumerist spirituality. Minimalism has also been framed as having fewer products of higher quality, and another way of satisfying needs besides consumption.

In his interviews with Paco Underhill, he describes the various ways retailers increase their profits by creating environments in which people buy. For those who are buying less, like minimalists, have they escaped the overwhelming power of retail psychology? It is unclear whether minimalists are exceptions to these rules. Through Underhill’s many hours of observations, he notes that some consumers do walk out of stores empty-handed. It is unclear if these people who abstain from making purchases share similarities, such as being a minimalist. As Gladwell concludes, the consumer is always changing and so must the strategies used by retailers. Retail companies may have become attune to this specific group of consumers, advertising in ways that now appeal to those who aim to consume less.

The case study I will investigate is aesthetic minimalism, investigating the ways in which minimalism can still be “sold” to consumers through different formats. Beyond the spirituality of minimalism, minimalism is presented as a fashion and design style that a person can buy. I will consult clothing websites, blogs, and YouTube videos as well as several non-academic readings that provide critical views on minimalism. . Are minimalists immune to the power of retail psychology? How do retailers already target shoppers who might identify as minimalist?

In order to answer these questions, I will reference articles in which people have already looked at websites such as personalized subscription-based companies (Stitch Fix) and ethical clothing retailers (Everlane) and their attempt to “sell” minimalism (Citation). Is minimalism as a belief system separate from aesthetic minimalism? Is minimalism anti-consumption or a different method of consumption altogether? I hope to answer this question by examining YouTube videos and blogs run by self-proclaimed minimalists. Embedded within these videos and blogposts, minimalists often promote their routines and habits, sometimes recommending products to buy. Additionally, people who consider themselves to be a minimalist may also subscribe to a minimalist aesthetic and display this aesthetic in their homes and clothes and this would be apparent on blogs and YouTube videos.

My Consumer Behavior is Connected