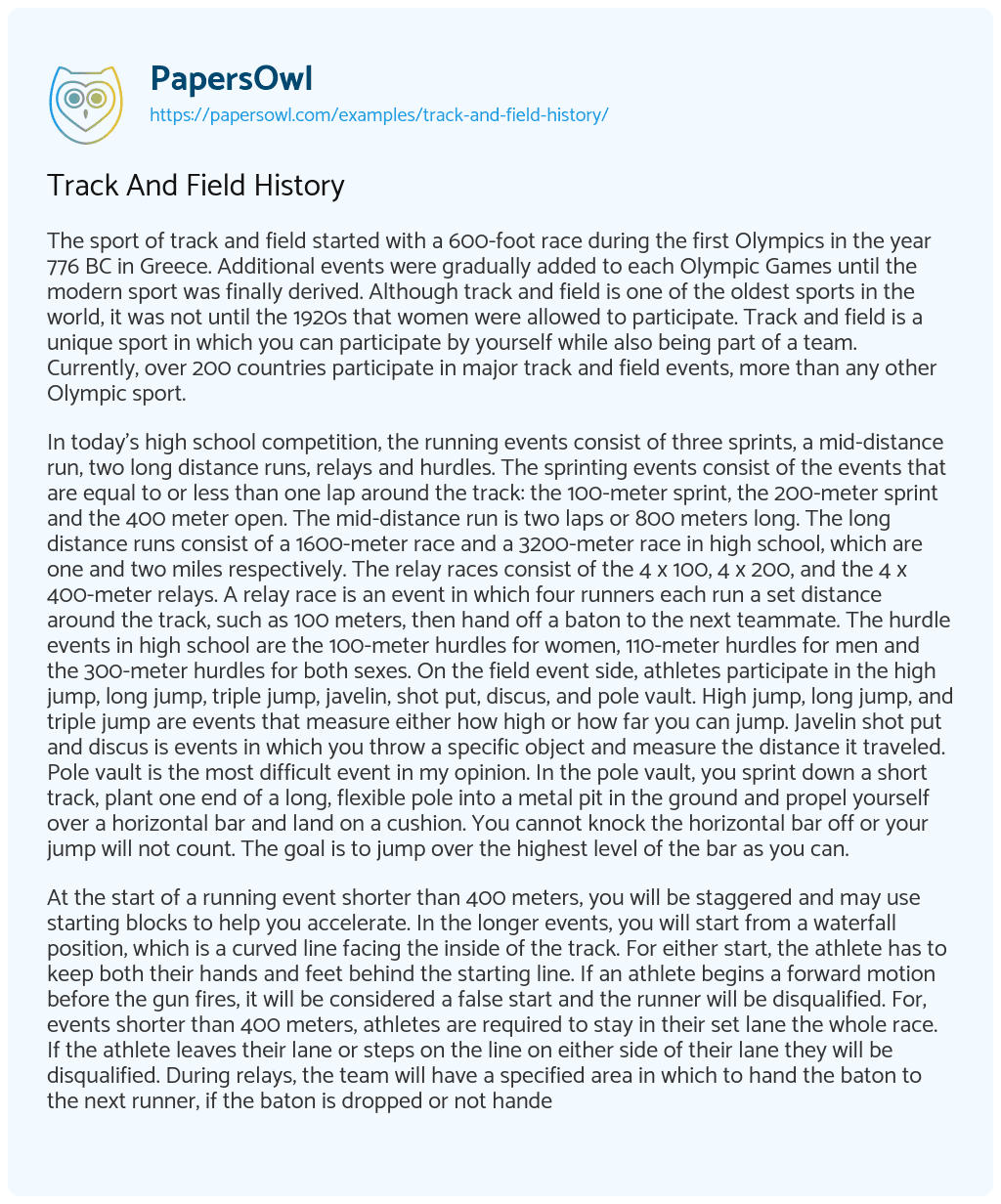 The sport of track and field started with a 600-foot race during the first Olympics in the year 776 BC in Greece. Additional events were gradually added to each Olympic Games until the modern sport was finally derived. Although track and field is one of the oldest sports in the world, it was not until the 1920s that women were allowed to participate. Track and field is a unique sport in which you can participate by yourself while also being part of a team. Currently, over 200 countries participate in major track and field events, more than any other Olympic sport.

In today’s high school competition, the running events consist of three sprints, a mid-distance run, two long distance runs, relays and hurdles. The sprinting events consist of the events that are equal to or less than one lap around the track: the 100-meter sprint, the 200-meter sprint and the 400 meter open. The mid-distance run is two laps or 800 meters long. The long distance runs consist of a 1600-meter race and a 3200-meter race in high school, which are one and two miles respectively. The relay races consist of the 4 x 100, 4 x 200, and the 4 x 400-meter relays. A relay race is an event in which four runners each run a set distance around the track, such as 100 meters, then hand off a baton to the next teammate. The hurdle events in high school are the 100-meter hurdles for women, 110-meter hurdles for men and the 300-meter hurdles for both sexes. On the field event side, athletes participate in the high jump, long jump, triple jump, javelin, shot put, discus, and pole vault. High jump, long jump, and triple jump are events that measure either how high or how far you can jump. Javelin shot put and discus is events in which you throw a specific object and measure the distance it traveled. Pole vault is the most difficult event in my opinion. In the pole vault, you sprint down a short track, plant one end of a long, flexible pole into a metal pit in the ground and propel yourself over a horizontal bar and land on a cushion. You cannot knock the horizontal bar off or your jump will not count. The goal is to jump over the highest level of the bar as you can.

At the start of a running event shorter than 400 meters, you will be staggered and may use starting blocks to help you accelerate. In the longer events, you will start from a waterfall position, which is a curved line facing the inside of the track. For either start, the athlete has to keep both their hands and feet behind the starting line. If an athlete begins a forward motion before the gun fires, it will be considered a false start and the runner will be disqualified. For, events shorter than 400 meters, athletes are required to stay in their set lane the whole race. If the athlete leaves their lane or steps on the line on either side of their lane they will be disqualified. During relays, the team will have a specified area in which to hand the baton to the next runner, if the baton is dropped or not handed to the next runner within that distance the team will be disqualified.

In high school, stretching was an important part of our practices. Stretching is vital to maintaining good flexibility and range of motion. We began every practice with static and dynamic stretches. First, we would sit down and perform hamstring stretches by doing the sit and reach stretch. After we would hook our ankle over our knee and pull to our chest in order to stretch our piriformis muscles. Then, we would stand up and stretch our heel cords and calves by putting our foot on a wall and leaning into it. After we would stretch our quads by holding our heel to our butt for 20 seconds then switch to holding our knee to our chest to stretch our glutes. After the static stretches, we would move on to dynamic stretching. This would consist of high knees, butt kicks, lunges, and power skips. We would also complete the warm-up by slowly jogging around the track for one lap to loosen up our muscles.

The hurdlers would then move on to stretch by themselves. In order to get the correct form to jump a hurdle, they must do extra stretches each day. We would start by getting into the hurdle stretch while on the ground. The hurdle stretch is the position in which you put your lead leg straight out in front of you and have your trail leg at a 45 to 90-degree angle with the lead leg while your knee is bent. This is the position you should be in at the moment you are over the hurdle. While in this position, we would lean forward and grab our lead ankle in order to stretch our hamstrings further and simulate the position we need to be in while jumping the hurdle. Next, we would set up the hurdles to the lowest height and put our lead leg on it and lean down and grab our ankles in order to stretch our hamstrings more. After that, we would line up around 8 hurdles one step apart and practice snapping our back leg up and over the hurdle. After properly stretching, we would be in the running and strength workouts followed by more stretching to reduce soreness.

After the stretches were completed, we would begin our running workouts. We would be separated by the type of event we ran based on the distance. We would be broken up into three groups: the sprinters, long-distance runners, and hurdlers. The sprinters would be the students who ran the 400 meter open and shorter distances. They would usually perform speed drills such as short sprints and parachute sprints. They would also practice block starts and baton handoffs for the relays. The long distance runners would run anywhere from 2 to 6 miles depending on the days till the meet. On days they ran longer distances they would slow their speed and set a faster pace on days they would only run 2 miles. The hurdlers spilt their time between working out with the sprinters and practicing jumping and stride patterns.

After the running workouts, each group would work on strengthening. A major muscle group to work out to help with sprinting and long-distance running is your core. We would perform abdominal exercises such as planks, sit-ups, crunches, Russian twists, and butterfly kicks. After the core workouts, explosive leg exercises were next. These consisted of burpees, long jumps, rocket jumps, and squat jumps. During the off-season, we would attend after-school workouts in order to keep up our level of fitness while we weren’t practicing.

Like all sports, nutrition is essential to an athlete’s performance. A poor diet can lead to poor performance. A balanced diet consisting of an appropriate amount of carbohydrates, protein, fat, and electrolytes will give you the energy for optimal performance. Before track and field events it is important to fuel up on carbohydrates days before to boost energy capacity. It is also important to sufficiently hydrate before and after exercising. Because carbohydrates are the most important aspect of a pre-event meal, I would usually pack a lunch of pasta and vegetables. In order to be adequately hydrated before my meet, I would bring two water bottles to school and drink a little throughout the day. After meets, it is advised to drink a Gatorade to replenish electrolytes and rehydrate.

During my time in high school, I ran the 100-meter hurdles and the 300-meter hurdles. Hurdle races are sprints in which an athlete must jump over 8-10 obstacles, called hurdles, during the race. The height of the hurdle varies by the distance of the race and gender of the runners. In high school, the 100 and 110 meter hurdles are 33 inches high for girls and 39 inches high for boys. The 300 meter hurdles are 30 inches high for girls and 36 inches high for boys. The 100 and 110-meter hurdles consist of 10 hurdles whereas the 300-meter hurdles only consist of 8. In the 100 meter hurdles, I started on starting blocks but did not for the 300-meter hurdles. While running the race there are four things can disqualify a hurdler: failing to jump a hurdle, hitting the hurdle with the trail leg at the moment of clearance, deliberately knocking down a hurdle, or entering another lane. Beginners must select a lead hurdling leg, usually the left leg if they are right-handed, then develop a consistent stride pattern, because the stride pattern determines which leg is placed in front when starting. If the hurdler takes an even number of steps to the first hurdle, the lead leg goes in the back, and vice-versa for an odd number of steps. While in the air it is important to lean forward and jump more horizontally than vertically to maximize efficiency.

I gained a lot of knowledge about conditioning, nutrition, and basic workouts to stay fit during the time I spent in the sport of track and field. My experience in high school first exposed me to sports movement and injuries which eventually lead me to pursue kinesiology as a major in college. It also taught me that practice makes you better and you cannot succeed without putting in the work to do so. Track not only trains your physical endurance, but it also strengthens your mental toughness. So much that goes into a running event is the mental toughness it requires to keep going. It tests your ability to push yourself harder than you think may be possible. You have to trust that you trained your muscles properly during practice and that you have the capability of out-running your competitors. This mental aspect applies to both individual and team events because you want to push yourself to do well for yourself and your team. These characteristic traits that track has taught me can be implemented in different life experiences. The endurance I have gained in mental and physical strength will continue to help me strive in my future endeavors.

Track And Field History. (2021, May 10). Retrieved from https://papersowl.com/examples/track-and-field-history/

Purpose and Meaning of Life

Career Paths in the Medical Field

Describe a Topic, Idea, or Concept you Find so Engaging that it Makes you Lose all Track of Time. why does it Captivate You? what or who do you Turn to when you Want to Learn More?