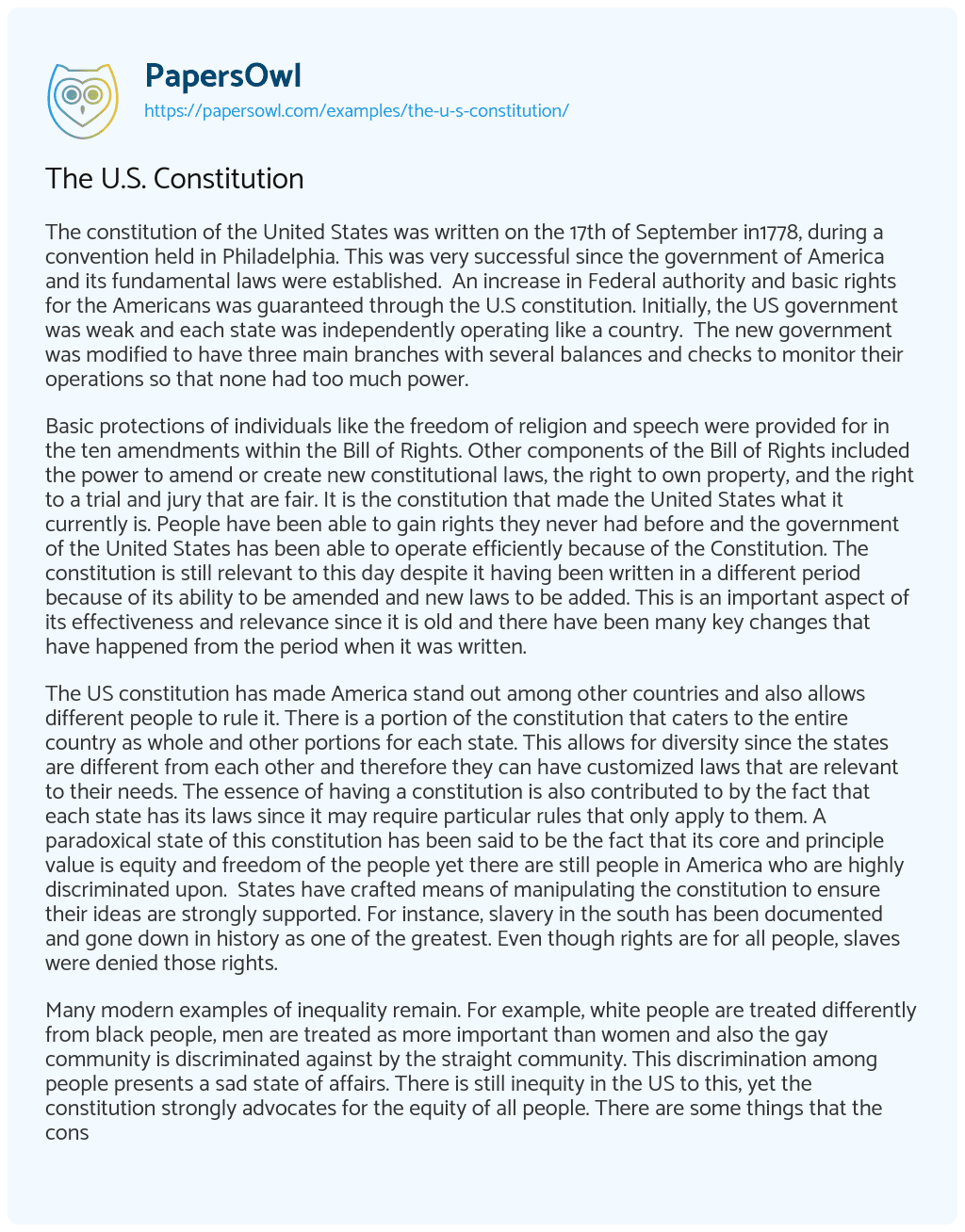 The constitution of the United States was written on the 17th of September in1778, during a convention held in Philadelphia. This was very successful since the government of America and its fundamental laws were established.  An increase in Federal authority and basic rights for the Americans was guaranteed through the U.S constitution. Initially, the US government was weak and each state was independently operating like a country.  The new government was modified to have three main branches with several balances and checks to monitor their operations so that none had too much power.

Basic protections of individuals like the freedom of religion and speech were provided for in the ten amendments within the Bill of Rights. Other components of the Bill of Rights included the power to amend or create new constitutional laws, the right to own property, and the right to a trial and jury that are fair. It is the constitution that made the United States what it currently is. People have been able to gain rights they never had before and the government of the United States has been able to operate efficiently because of the Constitution. The constitution is still relevant to this day despite it having been written in a different period because of its ability to be amended and new laws to be added. This is an important aspect of its effectiveness and relevance since it is old and there have been many key changes that have happened from the period when it was written.

The US constitution has made America stand out among other countries and also allows different people to rule it. There is a portion of the constitution that caters to the entire country as whole and other portions for each state. This allows for diversity since the states are different from each other and therefore they can have customized laws that are relevant to their needs. The essence of having a constitution is also contributed to by the fact that each state has its laws since it may require particular rules that only apply to them. A paradoxical state of this constitution has been said to be the fact that its core and principle value is equity and freedom of the people yet there are still people in America who are highly discriminated upon.  States have crafted means of manipulating the constitution to ensure their ideas are strongly supported. For instance, slavery in the south has been documented and gone down in history as one of the greatest. Even though rights are for all people, slaves were denied those rights.

Many modern examples of inequality remain. For example, white people are treated differently from black people, men are treated as more important than women and also the gay community is discriminated against by the straight community. This discrimination among people presents a sad state of affairs. There is still inequity in the US to this, yet the constitution strongly advocates for the equity of all people. There are some things that the constitution is silent about, like the separation of state and church, the right to a jury of your peers, and the right to privacy. The word ‘privacy’ has not been directly used in the constitution. Protection against ”unreasonable search and seizures” is the only one found in the fourth amendment. The constitution only offers a right to trial by an impartial jury, and nothing is guaranteed as regards the jury of your peers. Lastly, the constitution does not clearly outline the concept of government and religion not overlapping, yet it prohibits a religious test for lawmakers or the establishment of a national religion.

Constitution of the United States and the Fourth Amendment

The Bill of Rights and Constitution

About the United States Constitution