The Trail where they Cried 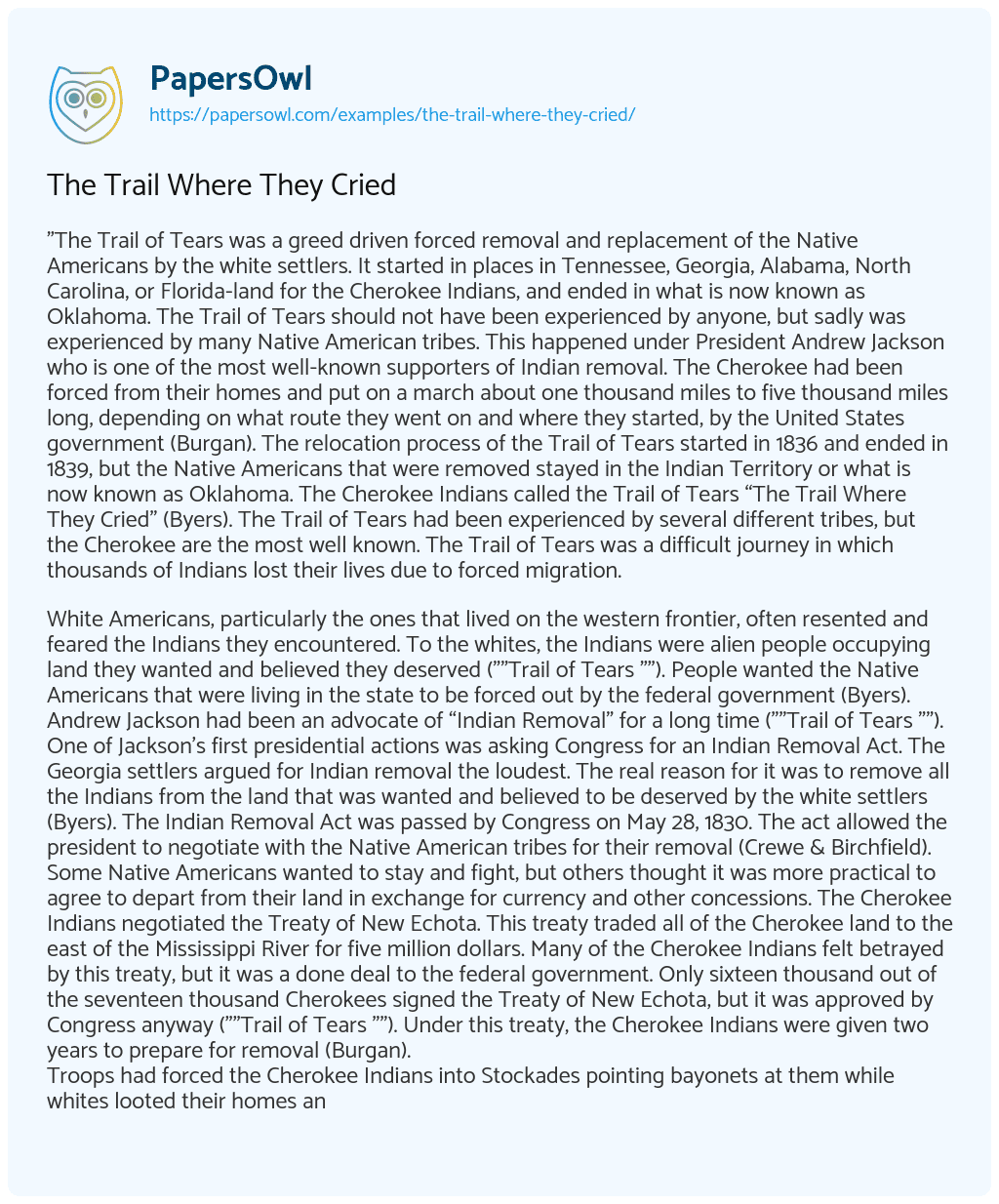 White Americans, particularly the ones that lived on the western frontier, often resented and feared the Indians they encountered. To the whites, the Indians were alien people occupying land they wanted and believed they deserved (“”Trail of Tears “”). People wanted the Native Americans that were living in the state to be forced out by the federal government (Byers). Andrew Jackson had been an advocate of “Indian Removal” for a long time (“”Trail of Tears “”). One of Jackson’s first presidential actions was asking Congress for an Indian Removal Act. The Georgia settlers argued for Indian removal the loudest. The real reason for it was to remove all the Indians from the land that was wanted and believed to be deserved by the white settlers (Byers). The Indian Removal Act was passed by Congress on May 28, 1830. The act allowed the president to negotiate with the Native American tribes for their removal (Crewe & Birchfield). Some Native Americans wanted to stay and fight, but others thought it was more practical to agree to depart from their land in exchange for currency and other concessions. The Cherokee Indians negotiated the Treaty of New Echota. This treaty traded all of the Cherokee land to the east of the Mississippi River for five million dollars. Many of the Cherokee Indians felt betrayed by this treaty, but it was a done deal to the federal government. Only sixteen thousand out of the seventeen thousand Cherokees signed the Treaty of New Echota, but it was approved by Congress anyway (“”Trail of Tears “”). Under this treaty, the Cherokee Indians were given two years to prepare for removal (Burgan).
Troops had forced the Cherokee Indians into Stockades pointing bayonets at them while whites looted their homes and belongings. The Native Americans were taken to the stockades to wait until they were all rounded up (“”Trail of Tears “”). Some Indians left their land willingly, but some were forced off their land by soldiers (Burgan). The people had been separated into groups of exactly 1,000 Indians. Provided by the government was one horse with a saddle for every four people and every twenty people were given a wagon (Gilbert). The first removal started in 1831 and continued into 1832 during the winter with about four thousand Choctaw Indians. Seven thousand soldiers were sent to speed up the removal process (“”Trail of Tears “”). In addition to sending the troops, contractors were hired by the government to organize the journey (Crewe & Birchfield). The land where the Indians lived had been cleared for white occupation with brutal efficiency (Byers). The five tribes that had been removed were the Choctaw, the Muscogee (Creek), the Seminole, the Chickasaw, and the Cherokee. In addition to this, there were also a few other small tribes involved (Crewe & Birchfield).

The removals led to the Trail of Tears which was a journey to the Indian Territory. They assembled near what is now known as Charleston in a place called Rattlesnake Spring. There were gaps of a few days between the departures of the different groups. The Cherokees were able to hunt as they traveled and some even managed to keep their livestock. As the Cherokees went into Kentucky they could have said, “this used to belong to us.” The Cherokee traveled few miles in Illinois compared to what they traveled before. The movement of the thousands of Native Americans looked like an army on the march (Gilbert). There are ten different routes known as the Trail of Tears (Byers). Survivors often remembered they had walked every step of the way.

There were many troubles on the Trail of Tears. At every river, groups faced danger, extra expenses, and delays. Local people demanded the Cherokee pay for damage even if they were not responsible for it and they were forced to pay anyway because they could not prove that they did not cause the damage. They often had to give the accusers an animal or property if the Indians had no money left. Due to delays, the people had to travel on Sundays to make up lost time. Most of the delay was caused by illness (Gilbert). Starvation, typhus, cholera, whooping cough, and dysentery were epidemic along the way (“”Trail of Tears “”). Winter was the worst because blizzard conditions that did not let up. If the current took control of wagons or a team panicked, people could drown while struggling to save their possessions from the current. When wagons and animals were lost, the remaining wagons became more crowded. Many people who were ill or old gave their places on the wagons to someone who needed it more than they did. One Cherokee Indian reminded his tribe that no matter what they had lost they still had their traditions and history (Gilbert).

After the Tribes reached the Indian Territory they lived there for the years to follow, even when it was no longer Indian Territory. By 1840, tens of thousands of Indians had been driven off of their own land in the states in the south and forced to move to the Indian Territory (“”Trail of Tears “”). The Indian Territory had also been called Indian country. Life for the Native Americans in the new land proved to be almost as deadly as the removals had been. Farming supplies and food for a year had been promised by the United States. Many found themselves dumped in an uninhabited region without clothing, food, or shelter. The Native Americans had organized school systems for their children and wrote new constitutions for their governments (Crewe & Birchfield). The Cherokee Indians formed the Cherokee Nation in 1846 (“”Trail of Tears “”). The Native Americans eventually got used to life in Indian country.

Initially, it was promised by the United States federal government that the Native Americans would remain left in peace forever in the new land, but they did not keep this promise (“”Trail of Tears “”). In 1861 during the Civil War, armies from the north and south swept through Indian Territory which caused death and terrible damage (Crewe & Birchfield). Indian country got smaller and smaller as the line of white settlement pushed towards the west. In 1907, Indian country became the state of Oklahoma (“”Trail of Tears””). When Oklahoma became a state all of the Native Americans in all the Tribes that lived there were forced to become state citizens (Crewe & Birchfield).

The Trail of Tears ended when the Native Americans reached the Indian Territory. Life in the Indian Country lasted for a long period of time. The Cherokee Indians did not choose to make this difficult and long trip. This was a cruel and horrible thing done by the government. The several tribes suffered the loss of their people and their belongings. The Trail of Tears might not have happened if the whites had not forced them off their land so they could have it. It should not have been experienced by anyone and no one deserved what happened. The Native Americans had to go through pain and suffering during removal, when they were on the Trail of Tears, and when they lived in Indian Country and it was not right. It was all because the greed of the white settlers. The Trail of Tears remains the most disastrous reminder of the broken promises and violence that the United States used to force Native Americans off the land that belonged to them (Burgan). This difficult journey in which thousands of Native Americans lost their lives due to forced migration is called the Trail of Tears.”

The Trail Where They Cried. (2020, Sep 30). Retrieved from https://papersowl.com/examples/the-trail-where-they-cried/