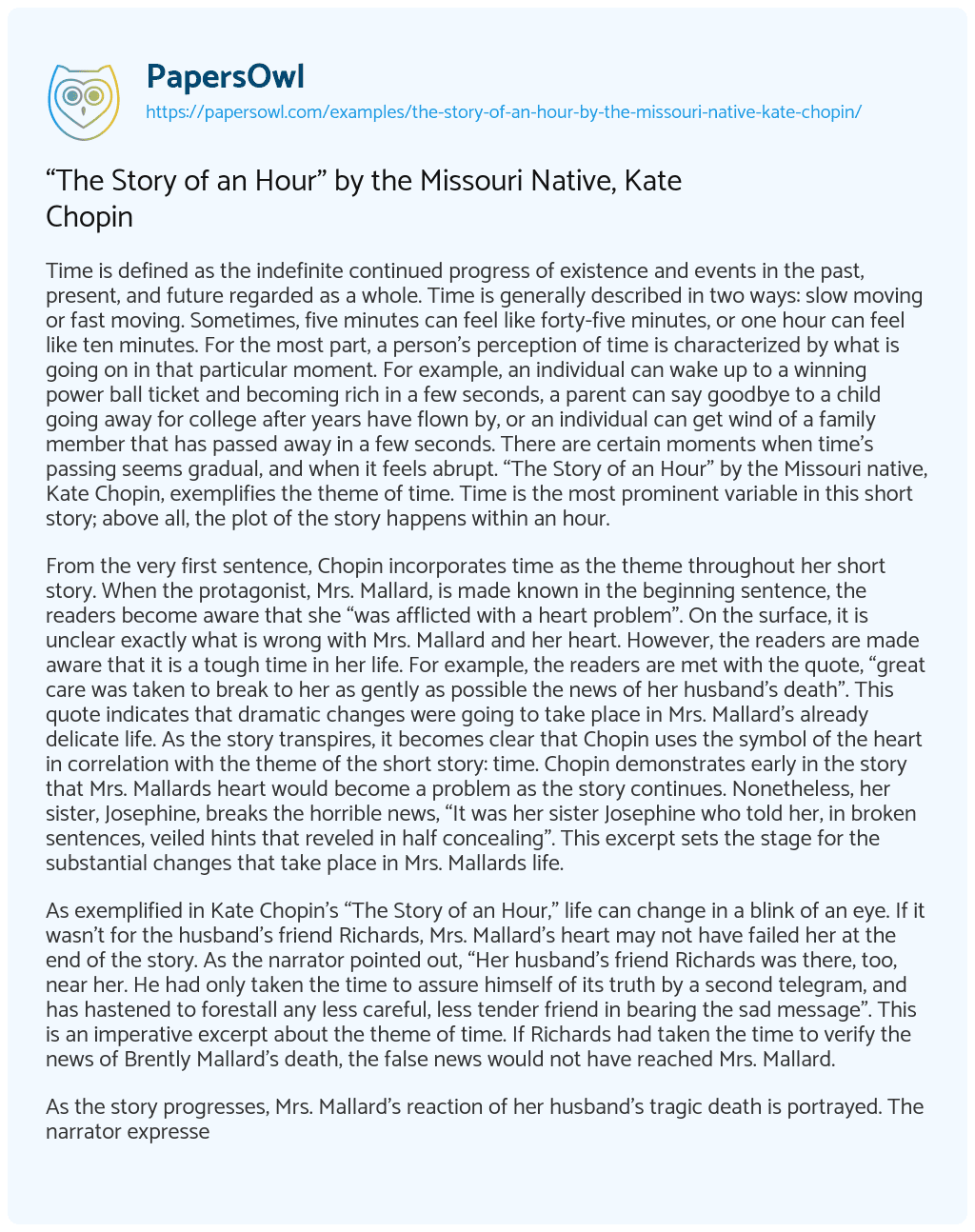 Time is defined as the indefinite continued progress of existence and events in the past, present, and future regarded as a whole. Time is generally described in two ways: slow moving or fast moving. Sometimes, five minutes can feel like forty-five minutes, or one hour can feel like ten minutes. For the most part, a person’s perception of time is characterized by what is going on in that particular moment. For example, an individual can wake up to a winning power ball ticket and becoming rich in a few seconds, a parent can say goodbye to a child going away for college after years have flown by, or an individual can get wind of a family member that has passed away in a few seconds. There are certain moments when time’s passing seems gradual, and when it feels abrupt. “The Story of an Hour” by the Missouri native, Kate Chopin, exemplifies the theme of time. Time is the most prominent variable in this short story; above all, the plot of the story happens within an hour.

From the very first sentence, Chopin incorporates time as the theme throughout her short story. When the protagonist, Mrs. Mallard, is made known in the beginning sentence, the readers become aware that she “was afflicted with a heart problem”. On the surface, it is unclear exactly what is wrong with Mrs. Mallard and her heart. However, the readers are made aware that it is a tough time in her life. For example, the readers are met with the quote, “great care was taken to break to her as gently as possible the news of her husband’s death”. This quote indicates that dramatic changes were going to take place in Mrs. Mallard’s already delicate life. As the story transpires, it becomes clear that Chopin uses the symbol of the heart in correlation with the theme of the short story: time. Chopin demonstrates early in the story that Mrs. Mallards heart would become a problem as the story continues. Nonetheless, her sister, Josephine, breaks the horrible news, “It was her sister Josephine who told her, in broken sentences, veiled hints that reveled in half concealing”. This excerpt sets the stage for the substantial changes that take place in Mrs. Mallards life.

As exemplified in Kate Chopin’s “The Story of an Hour,” life can change in a blink of an eye. If it wasn’t for the husband’s friend Richards, Mrs. Mallard’s heart may not have failed her at the end of the story. As the narrator pointed out, “Her husband’s friend Richards was there, too, near her. He had only taken the time to assure himself of its truth by a second telegram, and has hastened to forestall any less careful, less tender friend in bearing the sad message”. This is an imperative excerpt about the theme of time. If Richards had taken the time to verify the news of Brently Mallard’s death, the false news would not have reached Mrs. Mallard.

As the story progresses, Mrs. Mallard’s reaction of her husband’s tragic death is portrayed. The narrator expresses “She wept at once, with sudden, wild abandonment, in her sister’s arms, when the storm of grief had spent itself she went away to her room alone. She would have no one follow her”. After Mrs. Mallard entered her room in solitude, the weeping did not continue for long. As a shock to everyone, Mrs. Mallard’s emotion changed from distraught to freeing. She continued to whisper under her breath “free, free, free!”. However, this transition of emotions would happen again as the most shocking news was yet to come.

As “The Story of an Hour” continues, Mrs. Mallard experiences an abundance of emotions. Chopin continued the story with how Mrs. Mallard’s view on her life did a three-sixty. The narrator expounds, “Spring days, and summer days, and all sorts of days that would be her own. She breathed a quick prayer that life might be long. It was only yesterday she had thought with a shudder that life might be long”. This excerpt justifies the theme of time because one day Mrs. Mallard is frightened about her future as a spouse, however the next she is ecstatic and praying that her days as a widow are going to be great. Chopin does a great job of depicting the theme of time throughout her short story and demonstrates how quickly things can change in such a short period of time.

Once Mrs. Mallard is done with her prayer, she finally opens the door to Josephine and Richards. Her sister helps her down the stairs while Richards stands, waiting at the bottom. As they get to the bottom of the stairs the front door opens and her husband, Brently Mallard, walks through. The narrator states “When the doctors came they said she had died of heart disease – of joy that kills”. Mrs. Mallard’s heart had finally failed her and the readers get another example of how life can drastically change in such a short period of time. The last transition of emotions, within a blink of an eye eventually lead to Mrs. Mallards death. The plot of “The Story of an Hour” is centered around everything that happens within an hour of a day. Which in turn, justifies the theme that Kate Chopin exemplifies throughout her short story: time.

“The Story of an Hour” by the Missouri Native, Kate Chopin. (2022, Jun 26). Retrieved from https://papersowl.com/examples/the-story-of-an-hour-by-the-missouri-native-kate-chopin/