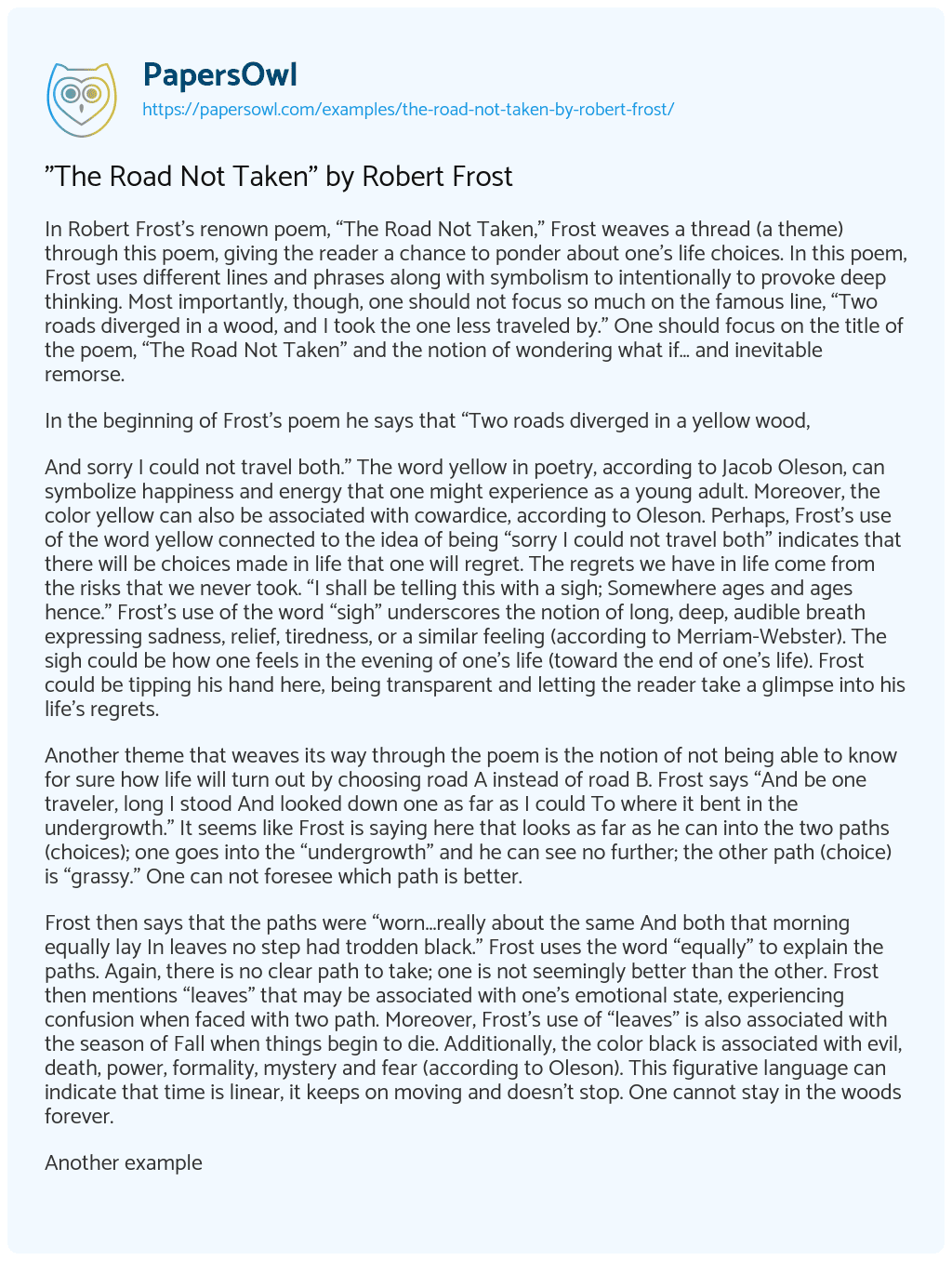 In Robert Frost’s renown poem, “The Road Not Taken,” Frost weaves a thread (a theme) through this poem, giving the reader a chance to ponder about one’s life choices. In this poem, Frost uses different lines and phrases along with symbolism to intentionally to provoke deep thinking. Most importantly, though, one should not focus so much on the famous line, “Two roads diverged in a wood, and I took the one less traveled by.” One should focus on the title of the poem, “The Road Not Taken” and the notion of wondering what if… and inevitable remorse.

In the beginning of Frost’s poem he says that “Two roads diverged in a yellow wood,

And sorry I could not travel both.” The word yellow in poetry, according to Jacob Oleson, can symbolize happiness and energy that one might experience as a young adult. Moreover, the color yellow can also be associated with cowardice, according to Oleson. Perhaps, Frost’s use of the word yellow connected to the idea of being “sorry I could not travel both” indicates that there will be choices made in life that one will regret. The regrets we have in life come from the risks that we never took. “I shall be telling this with a sigh; Somewhere ages and ages hence.” Frost’s use of the word “sigh” underscores the notion of long, deep, audible breath expressing sadness, relief, tiredness, or a similar feeling (according to Merriam-Webster). The sigh could be how one feels in the evening of one’s life (toward the end of one’s life). Frost could be tipping his hand here, being transparent and letting the reader take a glimpse into his life’s regrets.

Another theme that weaves its way through the poem is the notion of not being able to know for sure how life will turn out by choosing road A instead of road B. Frost says “And be one traveler, long I stood And looked down one as far as I could To where it bent in the undergrowth.” It seems like Frost is saying here that looks as far as he can into the two paths (choices); one goes into the “undergrowth” and he can see no further; the other path (choice) is “grassy.” One can not foresee which path is better.

Frost then says that the paths were “worn…really about the same And both that morning equally lay In leaves no step had trodden black.” Frost uses the word “equally” to explain the paths. Again, there is no clear path to take; one is not seemingly better than the other. Frost then mentions “leaves” that may be associated with one’s emotional state, experiencing confusion when faced with two path. Moreover, Frost’s use of “leaves” is also associated with the season of Fall when things begin to die. Additionally, the color black is associated with evil, death, power, formality, mystery and fear (according to Oleson). This figurative language can indicate that time is linear, it keeps on moving and doesn’t stop. One cannot stay in the woods forever.

Another example that theme works its way through the poem is the notion that once a path is chosen, then there is a chainreaction of events that will result. Frost says, “Oh, I kept the first for another day! Yet knowing how way leads on to way.” Frost shows the reader that life has a way of unfolding; events begin to present themselves and there often is no way to go back in time to go down the other path. That path (choice) may no longer be as it was. “I doubted if I should ever come back.” It is like having two nice girls to date. So, you pick one and eventually marry her.

Fifty years later, you are fishing up in Canada, thinking… I wonder what my life would have been like if I dated the other girl. Well, one will never know because that time will never come again in the same way.

So, in conclusion, coming full circle as stated in the beginning, this poem is titled “The Road Not Taken.” One would think that it’s title reads “The Road Less Traveled” because it is the line that is most remembered from this poem. By anchoring to the title, Frost not saying, “Take the road less traveled because it will be the right path, bringing you joy and happiness in your own life.” Ironically, Frost is saying something else, something like, “No matter what road you go down, it will have bumps and disappointments.” Frost in the end says, “I took the one less traveled by and that has made all the difference.” We do not know what the “difference” is or how things turned out. We are not supposed to know. More importantly, Frost is letting us (the readers) know that life will present difficult choices that we will all face. We will have to make decisions without knowing how our choices will impact our future. Our lives will be colorful, sometimes bright (yellow), sometimes dark (black); most importantly, our lives will be what we make of them.”

"The Road Not Taken" by Robert Frost. (2020, Feb 19). Retrieved from https://papersowl.com/examples/the-road-not-taken-by-robert-frost/