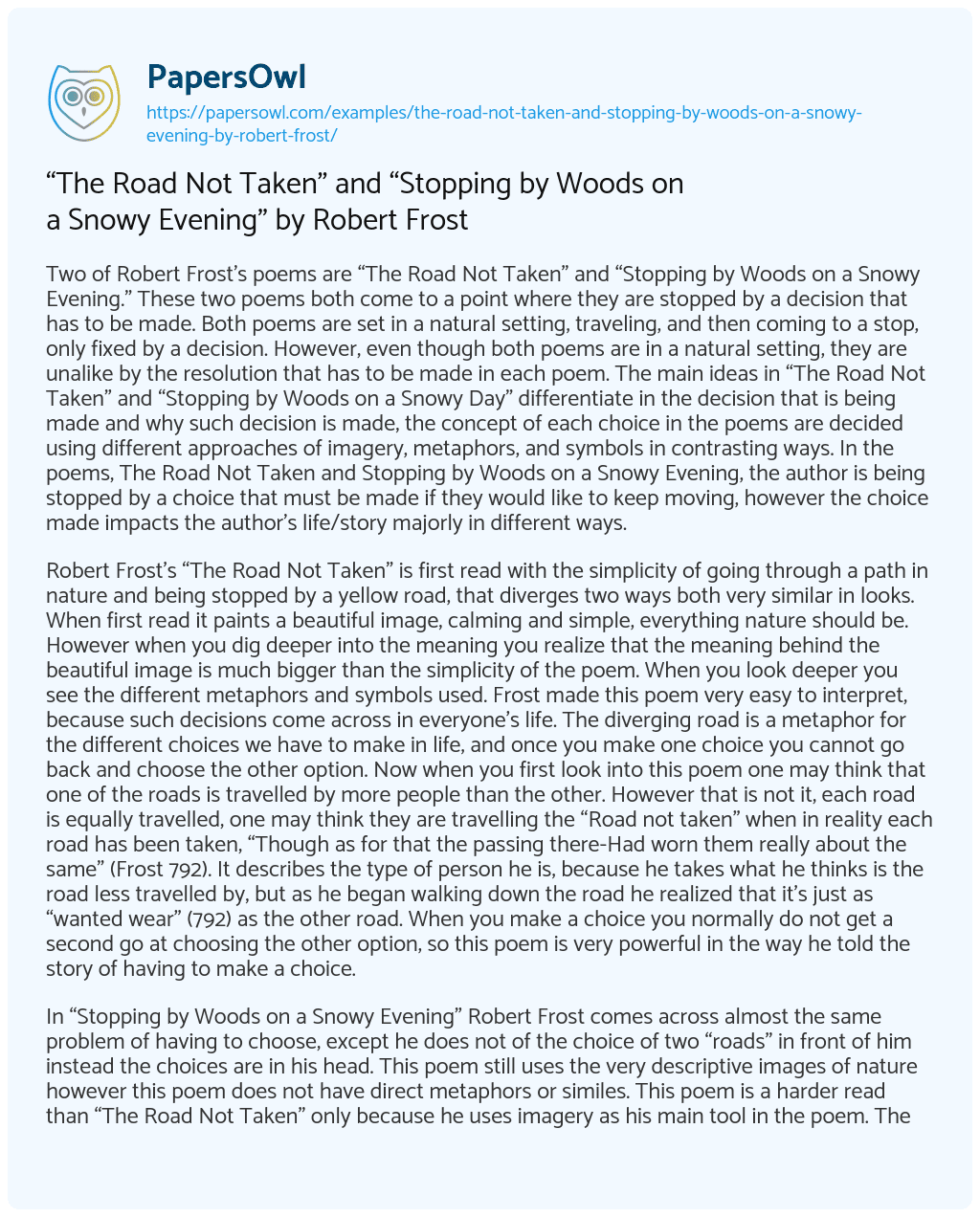 Robert Frost’s “The Road Not Taken” is first read with the simplicity of going through a path in nature and being stopped by a yellow road, that diverges two ways both very similar in looks. When first read it paints a beautiful image, calming and simple, everything nature should be. However when you dig deeper into the meaning you realize that the meaning behind the beautiful image is much bigger than the simplicity of the poem. When you look deeper you see the different metaphors and symbols used. Frost made this poem very easy to interpret, because such decisions come across in everyone’s life. The diverging road is a metaphor for the different choices we have to make in life, and once you make one choice you cannot go back and choose the other option. Now when you first look into this poem one may think that one of the roads is travelled by more people than the other. However that is not it, each road is equally travelled, one may think they are travelling the “Road not taken” when in reality each road has been taken, “Though as for that the passing there-Had worn them really about the same” (Frost 792). It describes the type of person he is, because he takes what he thinks is the road less travelled by, but as he began walking down the road he realized that it’s just as “wanted wear” (792) as the other road. When you make a choice you normally do not get a second go at choosing the other option, so this poem is very powerful in the way he told the story of having to make a choice.

In “Stopping by Woods on a Snowy Evening” Robert Frost comes across almost the same problem of having to choose, except he does not of the choice of two “roads” in front of him instead the choices are in his head. This poem still uses the very descriptive images of nature however this poem does not have direct metaphors or similes. This poem is a harder read than “The Road Not Taken” only because he uses imagery as his main tool in the poem. The first three stanzas are about the author just stopping and admiring the woods and its beauty, not worrying about the rest of his journey ahead. His horse is confused however, wondering why they are stopping and not continuing on. You can take this as the journey through life. Life consistently makes you work, it does not let you stop, because whenever you break you have people or alarms or demands making you get up to continue your work in life forbidding you from stopping and reflecting. The things that keep pushing you to continue would be the horse in this poem and the woods would be the break/rest you are trying to get in life. In the last stanza Frost says, “But I have promises to keep, – And miles to go before I sleep.” (Frost 852) This helps us with deciding that it is representing the journey of life, he has many things he has to complete before he “goes to sleep”. At the end of life is death, and Frost has many “promises to keep” before he dies or comes to the end of his life so he continues on with his journey.

These two poems of Robert Frosts are very similar in different ways. First I see a similarity in the simplicity of the poems. The way Frost uses imagery and a natural aspect in each poem but changes it into something with such a deep meaning is the way Robert Frost writes in every one of his poems. The two men in each poem are both just travelling/ walking a long when they both come to a stop unintentionally, the yellow diverging road and the beauty of the woods. Both being a metaphor for you never know what is going to come in life, you never know what choices you are going to have to make in your lifetime. In each poem the travelers are different by the way they see their life. In The Road Not Taken the traveler wants to take the road less travelled wanting to be different from others in the world that have travelled down that path. While in Stopping by Woods on a Snowy Evening the traveler wants to get away from his life for a few moments while he sits and admires the woods, wanting to get away from all the work and business of life. However they are similar in the fact that they both want to just get away. Both travelers are trying to make a decision for their life, they are both men who just want a break from everything in the world for a little bit of time. Both poems used imagery as a big tool, letting each aspect and word mean something in the poem. The natural aspect being the simplicity and how these situations happen in life every day for people, always having a choice to make.

These two poems are both very similar. We all have choices to make in life and they are not always easy to make. Robert Frost shows that in “The Road Not Taken” and “Stopping by Woods on a Snowy Evening” remarkably. In his use of different metaphors, similes, symbols, images, and just how simply he wrote those shows so much meaning. How things come across our paths throughout life and the choices we make. They are so simple, yet each decision means so much.

“The Road Not Taken” and “Stopping by Woods on a Snowy Evening” by Robert Frost. (2020, May 05). Retrieved from https://papersowl.com/examples/the-road-not-taken-and-stopping-by-woods-on-a-snowy-evening-by-robert-frost/

On Robert Frost’s “Stopping by Woods on a Snowy Evening”