The Real Cause of the Housing Crash 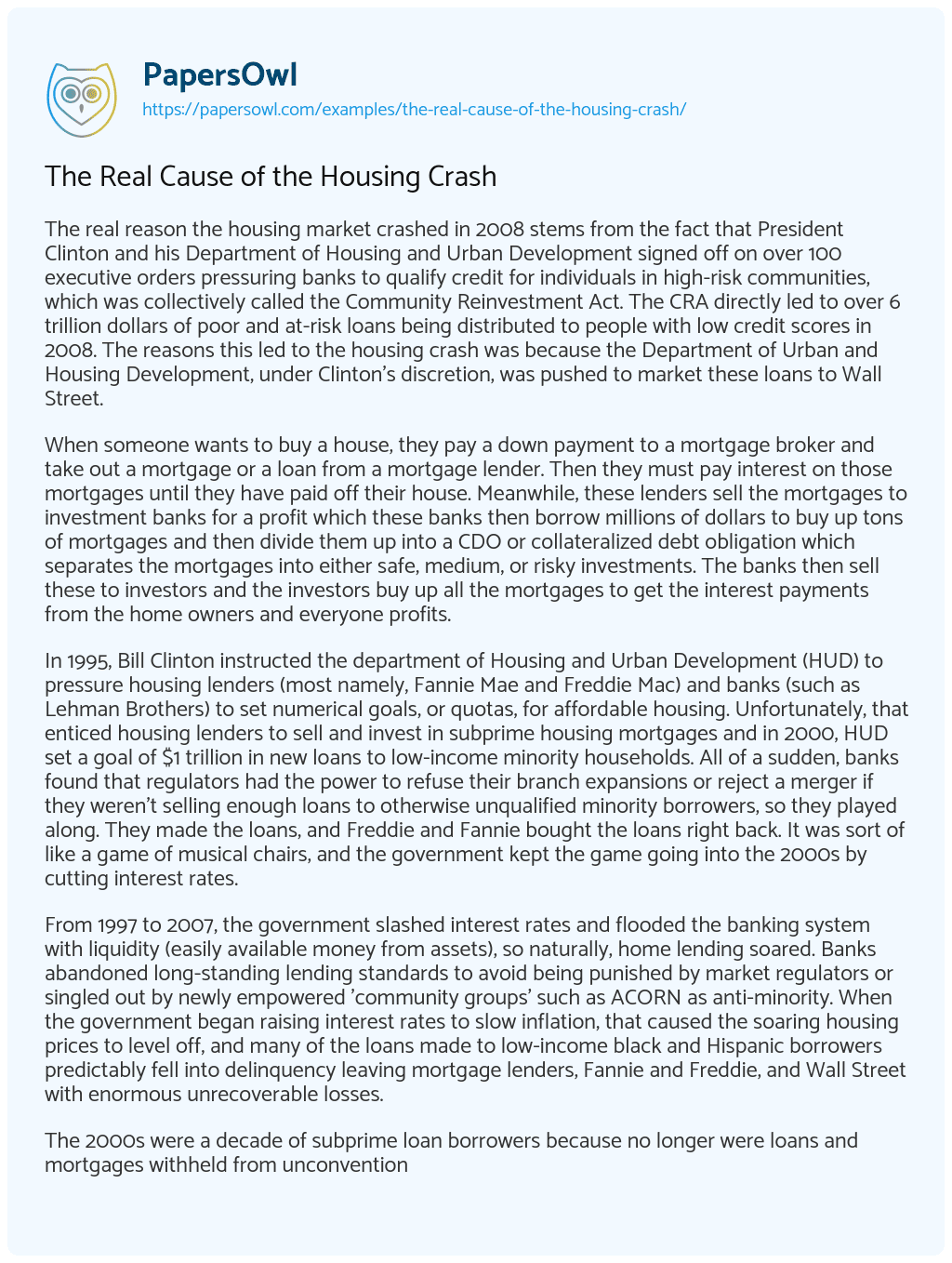 The real reason the housing market crashed in 2008 stems from the fact that President Clinton and his Department of Housing and Urban Development signed off on over 100 executive orders pressuring banks to qualify credit for individuals in high-risk communities, which was collectively called the Community Reinvestment Act. The CRA directly led to over 6 trillion dollars of poor and at-risk loans being distributed to people with low credit scores in 2008. The reasons this led to the housing crash was because the Department of Urban and Housing Development, under Clinton’s discretion, was pushed to market these loans to Wall Street.

When someone wants to buy a house, they pay a down payment to a mortgage broker and take out a mortgage or a loan from a mortgage lender. Then they must pay interest on those mortgages until they have paid off their house. Meanwhile, these lenders sell the mortgages to investment banks for a profit which these banks then borrow millions of dollars to buy up tons of mortgages and then divide them up into a CDO or collateralized debt obligation which separates the mortgages into either safe, medium, or risky investments. The banks then sell these to investors and the investors buy up all the mortgages to get the interest payments from the home owners and everyone profits.

In 1995, Bill Clinton instructed the department of Housing and Urban Development (HUD) to pressure housing lenders (most namely, Fannie Mae and Freddie Mac) and banks (such as Lehman Brothers) to set numerical goals, or quotas, for affordable housing. Unfortunately, that enticed housing lenders to sell and invest in subprime housing mortgages and in 2000, HUD set a goal of $1 trillion in new loans to low-income minority households. All of a sudden, banks found that regulators had the power to refuse their branch expansions or reject a merger if they weren’t selling enough loans to otherwise unqualified minority borrowers, so they played along. They made the loans, and Freddie and Fannie bought the loans right back. It was sort of like a game of musical chairs, and the government kept the game going into the 2000s by cutting interest rates.

From 1997 to 2007, the government slashed interest rates and flooded the banking system with liquidity (easily available money from assets), so naturally, home lending soared. Banks abandoned long-standing lending standards to avoid being punished by market regulators or singled out by newly empowered ‘community groups’ such as ACORN as anti-minority. When the government began raising interest rates to slow inflation, that caused the soaring housing prices to level off, and many of the loans made to low-income black and Hispanic borrowers predictably fell into delinquency leaving mortgage lenders, Fannie and Freddie, and Wall Street with enormous unrecoverable losses.

The 2000s were a decade of subprime loan borrowers because no longer were loans and mortgages withheld from unconventional lenders. The relaxing of credit lending standards by investment banks and commercial banks driven by Clinton’s housing policies drove banks and lenders to completely change their policies regarding requirements to take out loans. Subprime mortgages did not magically become less risky; Wall Street just accepted the higher risk. During a period of tough competition between mortgage lenders for revenue and market share, in addition to the limited supply of creditworthy borrowers, mortgage lenders relaxed underwriting standards and started handing out riskier mortgages to less creditworthy borrowers in order to fulfill demands made by Clinton’s HUD, as well as market regulators less they interfere with their company’s professional business practices (such as mergers and acquisitions for example).

In the early and mid-2000s, the Bush administration called numerous times for investigation into the safety and soundness of Government-Sponsored-Enterprises or GSEs (private banks and lenders receiving support from the federal government) and their rapidly growing portfolio of subprime mortgages. On September 10, 2003, the House Financial Services Committee held a hearing due to the pressure of the Bush administration to assess safety and reliability issues of GSEs and to review reports by the Office of Federal Housing Enterprise Oversight (OFHEO) that had discovered accounting discrepancies between the two offices. However, the hearings did not result in either new legislation or formal investigations of Fannie Mae and Freddie Mac, because many of the committee members refused to accept the report and instead rebuked OFHEO for their attempt at regulation.

This official government report on the causes of the housing crash provides very helpful and authenticated information on everything related to the housing crash from the origination of subprime mortgages to details of the economic fallout after the crisis. The report of the Financial Crisis Inquiry Commission incorporating studies by Federal Reserve economists, and the work of several independent authorities generally contend that the government affordable housing policies were not the primary cause of the financial crisis, although they acknowledge that governmental policies had a significant role in causing the crisis. The report maintains that GSE loans performed better than the loans marketed by private investment banks, and performed better than some loans that originated at institutions that privately managed their own portfolios.

In Peter J. Wallison’s assertion in the report of the Financial Crisis Inquiry Commission, he stated his belief that the roots of the financial crisis can be predominately traced directly to affordable housing policies initiated by HUD in the 1990s and to massive risky loan purchases by the GSE Fannie Mae and Freddie Mac. Later in the report, based upon information by the Securities and Exchange Commission, as well as securities fraud cases against six executives of Fannie and Freddie, Peter Wallison estimated that in 2008, Fannie and Freddie held 13 million substandard loans totaling over two trillion dollars, which shows a direct correlation to HUD’s dangerous policies and quota setting.

This news article from “The Economist” provides insight on the effects of the financial crash and the effects it had not only on America’s economy but also the world. It highlights the fall of Lehman Brothers, a large investment bank and how this was the start of a global crash that economies are still recovering from today. It analyzes the underlying causes that forced the economy to crash, such as lax discipline in mortgage and loan lending, and the immediate effects felt all over the world. The news article also reflects on how the government could have prevented the crash and what it is doing now to make sure something like it never happens again. This article is very helpful because it not only does it provide a deep insight as to why the economy fell but also how it has affected the entire global market. It stresses heavily that certain places like Europe are still trying to recover and that the effects could be felt for years following. It provides a good background as to what happened with the housing market and why it started a downward spiral. It is a very clear and precise article with no bias because it is strictly facts and analyzation as to what happened.

The collapse of Lehman Brothers Bank (one of the world’s biggest banks at the time) in September 2008 almost brought down the world’s financial system. Market regulators’ most dramatic error was to let Lehman Brothers go bankrupt. Since the bank was home to trillions of investor’s dollars, this multiplied panic in the markets. Suddenly, nobody trusted anybody, so nobody would lend. Non-financial companies, unable to rely on being able to borrow money to pay suppliers or workers, froze spending in order to hoard cash, causing a stagnation in the real economy. Ironically, the decision to stand back and allow Lehman Brothers to go bankrupt resulted in more government intervention, not less. To slow the resulting panic, regulators had to rescue countless other companies and it took huge taxpayer-funded bail-outs to support and keep industries afloat. Even so, the resulting sudden unavailability of credit from banks turned what was already a nasty slump into the worst recession in 80 years. GDP is still below its pre-crisis peak in many rich countries, especially in Europe, where the financial crisis evolved into the euro crisis, and the effects of the crash are still felt through the world economy.

In only a couple of weeks, many of the largest financial institutions in the nation failed or were forced to merge with other companies to avoid bankruptcy. Capital markets, which are essential for assisting families and businesses as they meet their everyday financial needs, started drying up which in turn, caused the availability of credit to be dramatically reduce. Investors, consumers, and market participants were rapidly losing trust in the stability of America’s financial system. To address the underlying causes of the crisis, the U.S. financial system had to modernize their regulatory concepts and put powerful consumer financial protections in place. After the crash, President Obama enacted the Dodd-Frank Wall Street Reform and Consumer Protection Act, which created a system dedicated to protecting consumer financials, facilitated the increased communication and transparency between lenders and consumers, and allowed for new systems to be put in place that monitors and resolves risks that could threaten the financial system in the future.

To sum it all up, Bill Clinton, working with congressional Democrats in the 1990s, empowered a massive, well-funded bureaucracy to regulate and punish those in the private sector that didn’t go along with Clinton’s plans to lend vast sums of money to people who could never pay the money back. This caused wide-spread high-risk loans to be bought and invested in by millions of Americans which in turn caused the housing prices and inflation to soar. When the federal government cut interest rates, many of the people possessing subprime loans defaulted on their payments causing a domino effect of bankruptcies and systematic money loss across the country’s markets.

The Real Cause of the Housing Crash. (2021, Oct 20). Retrieved from https://papersowl.com/examples/the-real-cause-of-the-housing-crash/

The Main Points of the Documentary Inside Job

How to Use Cryptocurrency to Pay your Mortgage