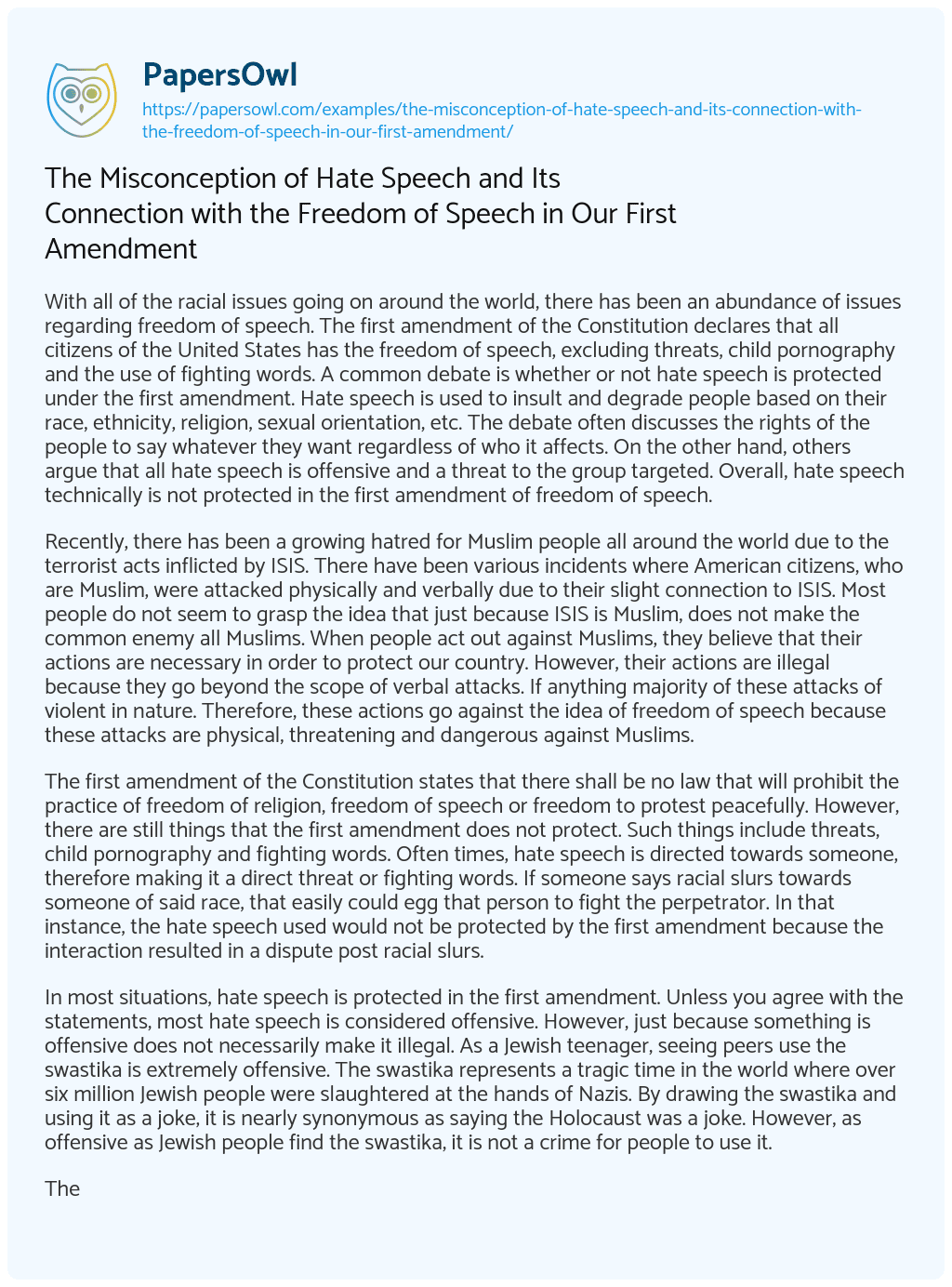 Recently, there has been a growing hatred for Muslim people all around the world due to the terrorist acts inflicted by ISIS. There have been various incidents where American citizens, who are Muslim, were attacked physically and verbally due to their slight connection to ISIS. Most people do not seem to grasp the idea that just because ISIS is Muslim, does not make the common enemy all Muslims. When people act out against Muslims, they believe that their actions are necessary in order to protect our country. However, their actions are illegal because they go beyond the scope of verbal attacks. If anything majority of these attacks of violent in nature. Therefore, these actions go against the idea of freedom of speech because these attacks are physical, threatening and dangerous against Muslims.

The first amendment of the Constitution states that there shall be no law that will prohibit the practice of freedom of religion, freedom of speech or freedom to protest peacefully. However, there are still things that the first amendment does not protect. Such things include threats, child pornography and fighting words. Often times, hate speech is directed towards someone, therefore making it a direct threat or fighting words. If someone says racial slurs towards someone of said race, that easily could egg that person to fight the perpetrator. In that instance, the hate speech used would not be protected by the first amendment because the interaction resulted in a dispute post racial slurs.

In most situations, hate speech is protected in the first amendment. Unless you agree with the statements, most hate speech is considered offensive. However, just because something is offensive does not necessarily make it illegal. As a Jewish teenager, seeing peers use the swastika is extremely offensive. The swastika represents a tragic time in the world where over six million Jewish people were slaughtered at the hands of Nazis. By drawing the swastika and using it as a joke, it is nearly synonymous as saying the Holocaust was a joke. However, as offensive as Jewish people find the swastika, it is not a crime for people to use it.

What most people seem to not understand is that just because something is considered offensive to one’s group, does not make it illegal. Hate speech in general is morally wrong but it is not illegal. Until it gets to the point where someone’s life is threatened, all verbal slurs are protected. One act of hate was done by local youths in Minnesota when they “burned a cross on a black family’s yard” (Juhan). This shows discrimination where the youths trespassed and vandalized private property. These youths were charged and convicted because these actions are not permitted by the freedom of speech stated in the first amendment of the constitution. This is considered an illegal action because they trespassed on others’ property and vandalized something that did not belong to them. Although technically this action could be considered freedom of speech, it is also very threatening towards the black family. Therefore, the act of threatening was involved and therefore was not protected by the first amendment. This is often misunderstood by people because they think as long as no one was injured, it is freedom of speech. However, it is illegal because the second they physically acted on their ‘freedom’ they threatened the family and any other believers of the Christian faith.

Most people misinterpret the idea of hate speech and its connection with freedom of speech. Unless there is a violation of one’s rights or a threat to someone’s life, there is no crime. Most people believe that hate speech is wrong and offensive and therefore is illegal. However, just because something is offensive does not necessarily make it a crime. There have been instances where kids would draw or say racist things but that is considered acceptable due to the fact that there was no threatening meaning towards what was said. However, if action was ever taken or threats were ever spoken, then it would be considered a crime because it then violates the peoples’ right to protection and safety. Most people still hope for “reform; one must not cease to work for ridding our public life of hate speech” (Noorani). All in all, although hate speech is morally wrong, it is protected under the first amendment of the United States Constitution.

The Misconception of Hate Speech and Its Connection with the Freedom of Speech in Our First Amendment. (2022, Nov 23). Retrieved from https://papersowl.com/examples/the-misconception-of-hate-speech-and-its-connection-with-the-freedom-of-speech-in-our-first-amendment/

A Comparison of Free Speech and Hate Speech in France, Citing Charlie Hebdo Shootings as the Biggest Threat to Free Speech this Year

The Need for the Restrictions of Hate Speech in America

The Issues of Hate Speech and Harmful Speech