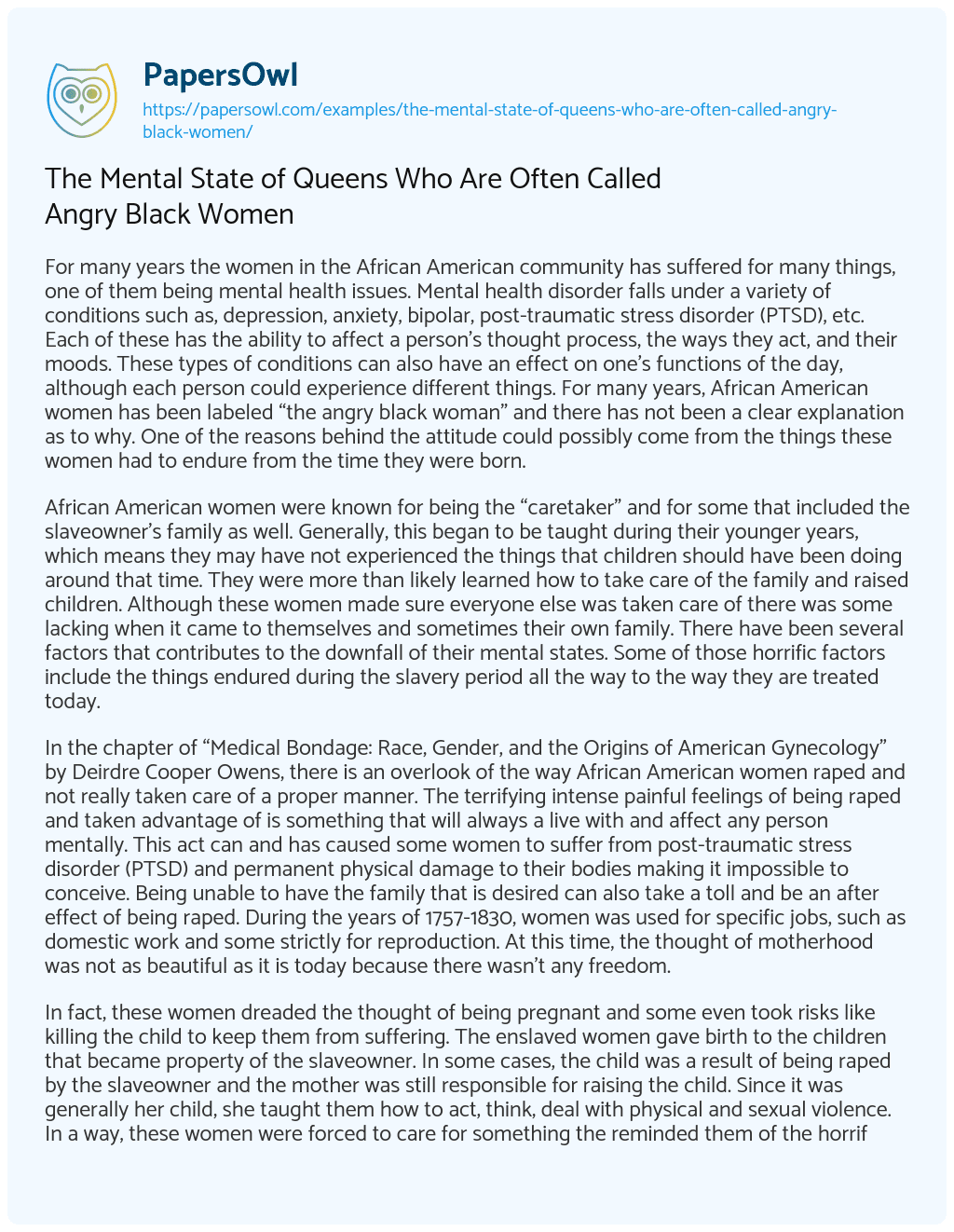 For many years the women in the African American community has suffered for many things, one of them being mental health issues. Mental health disorder falls under a variety of conditions such as, depression, anxiety, bipolar, post-traumatic stress disorder (PTSD), etc. Each of these has the ability to affect a person’s thought process, the ways they act, and their moods. These types of conditions can also have an effect on one’s functions of the day, although each person could experience different things. For many years, African American women has been labeled “the angry black woman” and there has not been a clear explanation as to why. One of the reasons behind the attitude could possibly come from the things these women had to endure from the time they were born.

African American women were known for being the “caretaker” and for some that included the slaveowner’s family as well. Generally, this began to be taught during their younger years, which means they may have not experienced the things that children should have been doing around that time. They were more than likely learned how to take care of the family and raised children. Although these women made sure everyone else was taken care of there was some lacking when it came to themselves and sometimes their own family. There have been several factors that contributes to the downfall of their mental states. Some of those horrific factors include the things endured during the slavery period all the way to the way they are treated today.

In the chapter of “Medical Bondage: Race, Gender, and the Origins of American Gynecology” by Deirdre Cooper Owens, there is an overlook of the way African American women raped and not really taken care of a proper manner. The terrifying intense painful feelings of being raped and taken advantage of is something that will always a live with and affect any person mentally. This act can and has caused some women to suffer from post-traumatic stress disorder (PTSD) and permanent physical damage to their bodies making it impossible to conceive. Being unable to have the family that is desired can also take a toll and be an after effect of being raped. During the years of 1757-1830, women was used for specific jobs, such as domestic work and some strictly for reproduction. At this time, the thought of motherhood was not as beautiful as it is today because there wasn’t any freedom.

In fact, these women dreaded the thought of being pregnant and some even took risks like killing the child to keep them from suffering. The enslaved women gave birth to the children that became property of the slaveowner. In some cases, the child was a result of being raped by the slaveowner and the mother was still responsible for raising the child. Since it was generally her child, she taught them how to act, think, deal with physical and sexual violence. In a way, these women were forced to care for something the reminded them of the horrific event. As a mother that, isn’t healthy for them or the child and could cause them to resent and act out and have anger. In the “Freaks, Divas, Gold Diggers, and Dykes: The Sociohistorical Development of Adolescent African American Women’s Sexual Scripts” by Dionne P. Stephens and Layli D. Phillips, there eight different scripts that described women. These women had different labels, which means they more than like went through different struggles. The struggle in most cases caused them to deal with their emotions different and possibly a mental illness such depression, anxiety, or some form of stress.

The mammy was the servant and a slave the made sure the needs of the White family was taken care of. Her job was to raise their children and even cook for the family. She deals with the backlash that is thrown at her because she does not give her own family the time that she gives the white family. The mammy may also deal with problems within herself because not people can deal with the criticism. Each type of woman had their own way of believing and their attitudes varied toward their sexuality. Almost all women were being stereotyped, regardless of if the were having sex or still a virgin. In addition to that these women faced what is called culture of dissemblance, meaning their attitudes changed in a way that covered or shielded the true experiences they went through. The Jezebel was known for being more respected by the slave owner in a sexual manner and she was responsible for all domestic house work. After being taken advantage of so many times she began to reject sexual activities to avoid the stereotypes much like the women labeled as freak. The women labeled as the gold digger were known as the women willing to do whatever it took to get what they need or want. They were willing to have sex for material goods and they did not realize how the men they were having these relations with were abusing them not only physically but also mentally. The women were degrading themselves by not understanding their self-worth. The diva also deals with being abused although it is done in a way that they are attempting to get higher recognition within the society by choosing men with high achievements.

Although they are getting a partner with a higher status, they may not be receiving the commitment that is needed. The women in the NPR podcast also had some horrific experiences that could cause long term mental damage. Slaveowner and gynecologist James Marion Sims, known as the “Father of Modern Gynecology”, practiced on three women by the name of Anarcha, Lucy, and Betsy, who were now known as the Mothers of Gynecology. Although these women were enslaved, they were robbed of what could possibly the last thing they could call their own, which was their dignity. These women even experienced complete humiliation as Sims performed several procedures on them. They were done without any anesthesia and he would sometimes invite others to watch. My personal experience with the gynecologist was great. Although these women went through these painful experiments, it paved a way for the medical attention to get better for today. If it was not for these women and anesthesia, my experience could have been painful and uncomfortable.

Much like the girl from the film “For Colored Girls” who had an abortion that was not professionally done. She accepted these terms because she knew what trouble it would cause with her mother and she was not mentally ready to accept the consequences. Each of the girls in the movie endured some type of mental burden throughout the movie whether it came from an experience as a child or as an adult. Growing up I experienced a lot of things and some of them left mental burdens on me and is the reason I do not tolerate certain things. It is also the reason my attitude changes in certain situations and why I know that some things I must deal with to get by. For example, Crystal Wallace was a mother that was deeply in love with a man that was physically and mentally abusive. She was not in a healthy mental state, but she continued to be submissive to him, while trying to protect her children. There is also Nyla Adrose, who was the child of a women who was abused and set the bar kind of high. This character reminds me more of myself because I made mistakes and tried to do whatever it took the fix it. It did not matter what was the cost because I was willing to do whatever to keep my family happy and not to feel like a letdown. Racism and violence are also an issue with African American men and women, but the violence against women is not publicized nearly as much as the men. It seems like the stories concerning the women slips right through the fingers of the people in the media. This makes it hard or more challenging for black women to fight for equality. Women deal with discrimination; black women deal with it on a more intense level. There is racism and sexism, which makes it hard for them to get jobs necessary for providing and taking care of their families.

The inability to provide the necessities for their children led many mothers to seek for help within the government, much like the welfare mother. She is the mother that is criticized although she is attempting to take care of her children. The problem with her is in place because she has children uncontrollably and relies on the taxpayers to take care of them in a sense. Regardless of what they do, whether is working or collecting money from the government black women will always get talked about and labeled. They will always have obstacles and challenges to overcome, but it is extremely important to be aware of the factors played to make black women act so angry and bitter toward certain situations. As a result of all of the abuse, lack of protection, and lack of recognition there was is called intersectionality. These women had to learn how to interlock different characterizations and adapt with some of the terms and conditions regardless of the way it made them feel.

Even today women are still facing rape and abuse and there a laws and counseling that is available, but some women are unable to over come the stress. In some cases, much like my very own cousin’s, some commit suicide or murder-suicide because they are strong enough to deal with the thoughts every day. There others that are abused that can be strong and help themselves and others.

The Mental State of Queens Who Are Often Called Angry Black Women. (2021, Jun 16). Retrieved from https://papersowl.com/examples/the-mental-state-of-queens-who-are-often-called-angry-black-women/

The Dark Side of Adoption: Mental Health in Adoptees