The Dark Side of Adoption: Mental Health in Adoptees 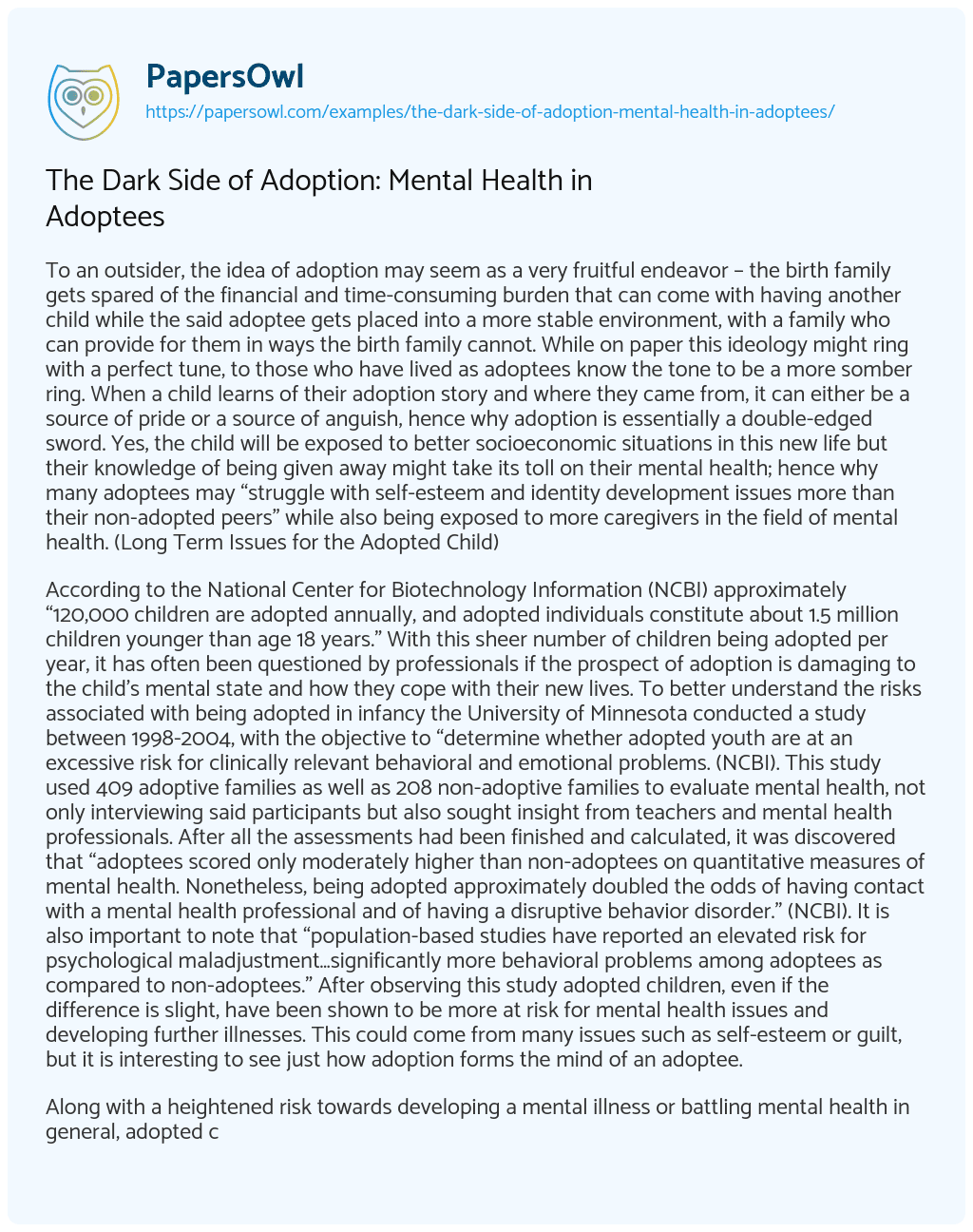 To an outsider, the idea of adoption may seem as a very fruitful endeavor – the birth family gets spared of the financial and time-consuming burden that can come with having another child while the said adoptee gets placed into a more stable environment, with a family who can provide for them in ways the birth family cannot. While on paper this ideology might ring with a perfect tune, to those who have lived as adoptees know the tone to be a more somber ring. When a child learns of their adoption story and where they came from, it can either be a source of pride or a source of anguish, hence why adoption is essentially a double-edged sword. Yes, the child will be exposed to better socioeconomic situations in this new life but their knowledge of being given away might take its toll on their mental health; hence why many adoptees may “struggle with self-esteem and identity development issues more than their non-adopted peers” while also being exposed to more caregivers in the field of mental health. (Long Term Issues for the Adopted Child)

According to the National Center for Biotechnology Information (NCBI) approximately “120,000 children are adopted annually, and adopted individuals constitute about 1.5 million children younger than age 18 years.” With this sheer number of children being adopted per year, it has often been questioned by professionals if the prospect of adoption is damaging to the child’s mental state and how they cope with their new lives. To better understand the risks associated with being adopted in infancy the University of Minnesota conducted a study between 1998-2004, with the objective to “determine whether adopted youth are at an excessive risk for clinically relevant behavioral and emotional problems. (NCBI). This study used 409 adoptive families as well as 208 non-adoptive families to evaluate mental health, not only interviewing said participants but also sought insight from teachers and mental health professionals. After all the assessments had been finished and calculated, it was discovered that “adoptees scored only moderately higher than non-adoptees on quantitative measures of mental health. Nonetheless, being adopted approximately doubled the odds of having contact with a mental health professional and of having a disruptive behavior disorder.” (NCBI). It is also important to note that “population-based studies have reported an elevated risk for psychological maladjustment…significantly more behavioral problems among adoptees as compared to non-adoptees.” After observing this study adopted children, even if the difference is slight, have been shown to be more at risk for mental health issues and developing further illnesses. This could come from many issues such as self-esteem or guilt, but it is interesting to see just how adoption forms the mind of an adoptee.

Along with a heightened risk towards developing a mental illness or battling mental health in general, adopted children struggle once again when it comes to their own personal value. According to the American Society for the Positive Care of Children (ASPCC), “A number of studies have found that, while adopted persons are similar to non-adopted persons in most ways, they often score lower on measures of self-esteem and self-confidence…some adopted persons may view themselves as different…rejected.” Dealing with the idea that the people who gave birth to you didn’t want you in your life, for whatever reason, is something that leaves a massive hole in the soul of an adopted child, something that can never truly be filled. Hence why negative feelings could be harbored towards oneself, resulting in poor self-esteem levels or even hating oneself. While an unfortunate tragedy, it is natural to evaluate and judge oneself as this is how we grow as individuals, but for the adoptee, being different is one of the worst things to be.

Countless studies have been centered around the adopted child and just how their brains are affected by the trauma of adoption, but it turns out they suffer in another area as well – the education system. A study undertaken by the Institute for Family Studies proved to be quite fruitful in showing this divide between an adopted child and a non-adopted one: known as the ECLS-K study, a group of 160 children/families were evaluated based on kindergarten school behavior. In terms of classroom conduct, “adopted children were more likely than biological ones to be reported to get angry easily and often argue or fight with other students. In kindergarten, the average problem behavior rating for the adopted group was at the 64th percentile, whereas for children with both birth parents, it was at the 44th percentile. (Higher percentile ranks indicate more problem behavior. The 50th percentile represents the average rating score for all students.)” (IFS). Adopted children do less well, at first, in the classroom setting due to emotionally reactions, but this could tie largely into the mental health aspect. Since the adopted children realize they are different from the rest and do not have the experience with how to cope with these newfound emotions, it is natural they would retaliate with the easiest emotion – anger/violence. While this is a poor method of coping it may be the only thing these children have in order to work through past trauma, perhaps needing guidance or special attention to satisfy their needs as well. This acting out could also result in attention deficit disorders, which adopted children have been proven to be at more risk for, but further research would be needed to truly understand this.

Along with behavior, in terms of reading and math skills it has been shown that these kids suffer as well. In the study it was found the adopted children “at the 49th percentile” ranked lower than the “56th percentile” of children who had both their birth parents. (IFS). This means in terms of early reading skills, adopted children still do suffer, but not as highly as social cues. This could be due to education efforts made by wealthy adoptive parents, but these only go so far. As of math skills, the results prove this same discrepancy, “Their average raw score was about the same as that for all U.S. kindergartners, that is, at the 50th percentile. However, they did less well than children with both birth parents, whose average math skills were at the 59th percentile. And their performance was not significantly better than that of children from single-parent, step, and foster families, who were at the 41st percentile.” In any given educational field, the children may perform well in subjects such as math or reading, but still come short of both the national average and the scores of those who have both birth parents. It has been theorized that both acting out and poor scores could result from attachment issues, post adoption stress issues, and genetic impulses, all of which can be felt by an adopted child. While the parents of said adoptees may provide the child with quality education and the necessary tools to learn, their performance may still hinder, something both family and child alike should adapt and improve on.

The face of adoption has changed. While more people continue to adopt daily, it is important to note just how adoption will affect the child being brought into the home. Not only will they face identity issues, self-esteem issues, but also those of mental health and behavioral disorders. They will face more challenges in school then most children and may act out in social situations, but this can be fixed or improved. Through the use of information, professional help, or encouragement within the family, these issues can be addressed and adapted to, in order to help the child succeed in life. Adoption is going to bring many joys to both family and child alike, but it is important to understand just how adoption can affect said child and why. In no way is this meant to sway people away from adoption, but merely allowing them to see a point of view they may have never seen before – the negative side. Mental health is seldom ever talked about, even more so adopted children’s mental health, but through education efforts, patience, and love can these children be pulled out of misery and thrive in life, just like any normal child.

The Dark Side of Adoption: Mental Health in Adoptees. (2021, Jun 03). Retrieved from https://papersowl.com/examples/the-dark-side-of-adoption-mental-health-in-adoptees/