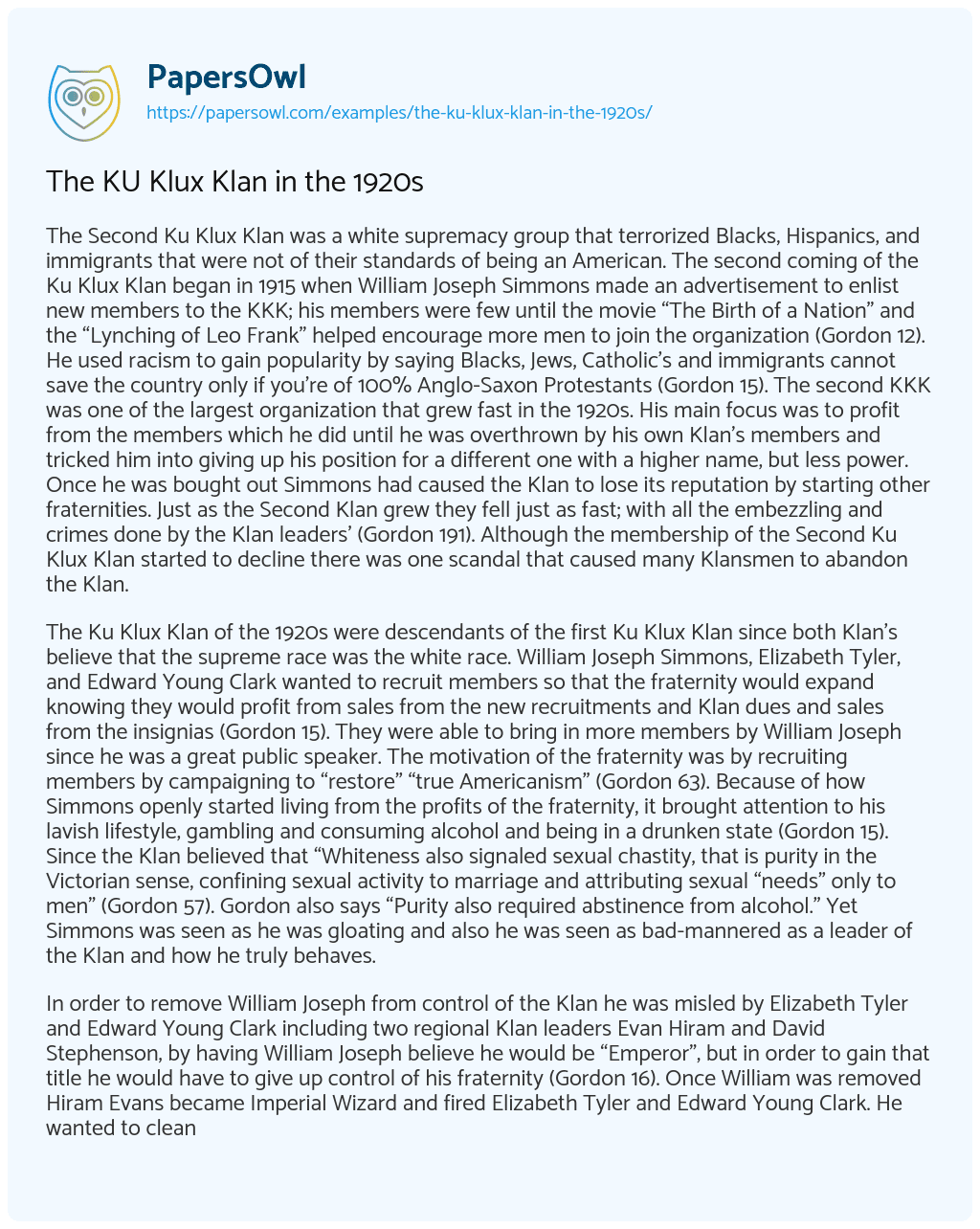 The Second Ku Klux Klan was a white supremacy group that terrorized Blacks, Hispanics, and immigrants that were not of their standards of being an American. The second coming of the Ku Klux Klan began in 1915 when William Joseph Simmons made an advertisement to enlist new members to the KKK; his members were few until the movie “The Birth of a Nation” and the “Lynching of Leo Frank” helped encourage more men to join the organization (Gordon 12). He used racism to gain popularity by saying Blacks, Jews, Catholic’s and immigrants cannot save the country only if you’re of 100% Anglo-Saxon Protestants (Gordon 15). The second KKK was one of the largest organization that grew fast in the 1920s. His main focus was to profit from the members which he did until he was overthrown by his own Klan’s members and tricked him into giving up his position for a different one with a higher name, but less power. Once he was bought out Simmons had caused the Klan to lose its reputation by starting other fraternities. Just as the Second Klan grew they fell just as fast; with all the embezzling and crimes done by the Klan leaders’ (Gordon 191). Although the membership of the Second Ku Klux Klan started to decline there was one scandal that caused many Klansmen to abandon the Klan.

The Ku Klux Klan of the 1920s were descendants of the first Ku Klux Klan since both Klan’s believe that the supreme race was the white race. William Joseph Simmons, Elizabeth Tyler, and Edward Young Clark wanted to recruit members so that the fraternity would expand knowing they would profit from sales from the new recruitments and Klan dues and sales from the insignias (Gordon 15). They were able to bring in more members by William Joseph since he was a great public speaker. The motivation of the fraternity was by recruiting members by campaigning to “restore” “true Americanism” (Gordon 63). Because of how Simmons openly started living from the profits of the fraternity, it brought attention to his lavish lifestyle, gambling and consuming alcohol and being in a drunken state (Gordon 15). Since the Klan believed that “Whiteness also signaled sexual chastity, that is purity in the Victorian sense, confining sexual activity to marriage and attributing sexual “needs” only to men” (Gordon 57). Gordon also says “Purity also required abstinence from alcohol.” Yet Simmons was seen as he was gloating and also he was seen as bad-mannered as a leader of the Klan and how he truly behaves.

In order to remove William Joseph from control of the Klan he was misled by Elizabeth Tyler and Edward Young Clark including two regional Klan leaders Evan Hiram and David Stephenson, by having William Joseph believe he would be “Emperor”, but in order to gain that title he would have to give up control of his fraternity (Gordon 16). Once William was removed Hiram Evans became Imperial Wizard and fired Elizabeth Tyler and Edward Young Clark. He wanted to cleanse the name of the Klan and make it pure again, he wanted the Klan to be view for what it signified not for what it did; by changing the Oath of the Klan, removing corrupted Klan members and those that sinned (Gordon 17). He also made David Stephenson chief recruiter of seven states which give him power.

According to Gordon, David Stephenson was a regional Klan leader from Indiana, who became the chief recruiter of seven states by Hiram Evans. With this promotion, it made Stephenson “The Grand Dragon of Indiana” which gave him a big ego (Bee). With the new fame and position, David Stephenson had lied about who he was, how he grew up and what he has done in order to have earned his position. According to Lay, Stephenson was “An amoral opportunist given to heavy drinking and ceaseless womanizing.” He would be the one to bring the Klan to the end of their reign. Stephenson felt he was above the law and that he was the law in his eyes.

The beginning of the decline started when members started to realize that the Klan leaders were benefitting from recruiting members also by overcharging members through fees and sales of which was just for show. The other thing was the rivalry between the Klan’s; some wanted more power while others wanted to be their own organization. With the declining of members, the local and national newspaper did not help when the “scandals of the leaders’ crime, hypocrisy and misbehavior” coming out (Gordon 191). Moreover, with the twice rape and killing conviction by the Oregon leader Ellis O. Wilson on his secretary; he killed her by trying to perform an abortion on her (Gordon 191). Also, The Imperial Night-Hawk editor was sentenced to life imprison for killing his rival William S. Coburn (Gordon 191). All the shamelessness attention on the Klan’s crimes of murder and embezzlement made the FBI open investigations on the Klansmen. With the investigations it did not phase the Klansmen as when they were tried they were not convicted because the jury supported the Klan. The FBI agent J. Edgar Hoover decided to approach the Klan another way, he prosecuted Klan leader Edward Clarke for “violation Prohibition and the Mann Act” (Gordon 192). With all the publicity of these crimes and hypocrisy lead the member to stop paying their annual fees or leave the organization altogether.

The Klan’s ethical approach, in the beginning was to have a White Protestant America, sober and sinless with Great White Protestant American Leaders. They viewed the African Americans and the Immigrants as low and with no rights to equal opportunity. Their place was either in the fields or with the savages. The Klan’s deceit on society and how they valued their kind made people see that they were no better than the Immigrants and African Americans. How they violated and harm their own and how they did it was enough for members to want to leave and not associate themselves with the Klan.

The breaking point that caused the Second Klan to fall was the Murder trial of the Grand Dragon of Indiana, David Curtis Stephenson. Although, reports of Stephenson alleged sexual assaults on women came out and his excessive drinking, he agreed to plead guilty on indecent exposure while in his car (Abbott). Even with other reports of locking another woman in a room during a party and forcing her down trying to rape her while biting her all over (Gordon 193). Even with the scandals prior to the Murder trial, the Klan tribunal tried to expel him out of the Klan he was very powerful and continued to run his Klan in Indiana as his own organization. David Stephenson was well known and he made sure he had the law on his side, with the increase of his organization he was unstoppable and the other Klan’s could not touch him.

The young Madge Oberholtzer was a state secretary who met David Stephenson on “January 12, 1925, at inauguration of Edward Jackson” and started seeing David Stephenson (Abbott). Unfortunately, on March 15, 1925, just after coming home around 10:00 pm she had received a call from David Stephenson saying he must see her and sent for her to be picked up (Gordon 194). According to Fryer and Levitt, Madge Oberholtzer by Stephenson “forced her onto a train headed to Chicago.” She was previously forced to drink and while on the train in a closed compartment Stephenson attacked and raped her (Lay). The attack was not only raping it was gruesome and unheard of to be bit up and have chew marks and bleeding all over Madge’s body, neck and face. Instead of going to Chicago they ended up in a hotel where David Stephenson did not seek medical attention for Madge Oberholtzer (Gordon 194). Although it was not her fault she knew for women at that time her virtue has been compromised and she had no reason to live. This is why she asked David Stephenson to let her go to the drugstore so she can buy makeup, while at the drugstore she was able to buy bichloride of mercury and took six of them knowing how toxic they were (Gordon 19). The actions of David Stephenson gave Madge Oberholtzer no chance of having a prosperous family life.

The conviction of David Stephenson for the murder of Madge Oberholtzer was the turning point of why the decline in the Klan happened. The view of the vicious attack on a helpless woman was seen so surreal of what the Klan was really like. The power David Stephenson believed he was above the law and how he believed he was untouchable and that he would get away with anything, that arrogant way of thinking is what brought him down and also the KKK. In his mind, he believed he would have been pardon by the Governor since he helped get him in office, but that did not happen and he was jilted (Gordon 194). Although there were other incidents, this case is what brought to light the person he really was. The belief that the Klan was for a Great White America was only to persuade people to join the organization, but in reality, it was to gain from them and they were consumers buying into the brand. Once David Stephenson was found guilty most people did not want to be associated with the Klan as it bared a disgraceful label.

Civil War and the Klan

Aftershock: Beyond the Civil War Summary