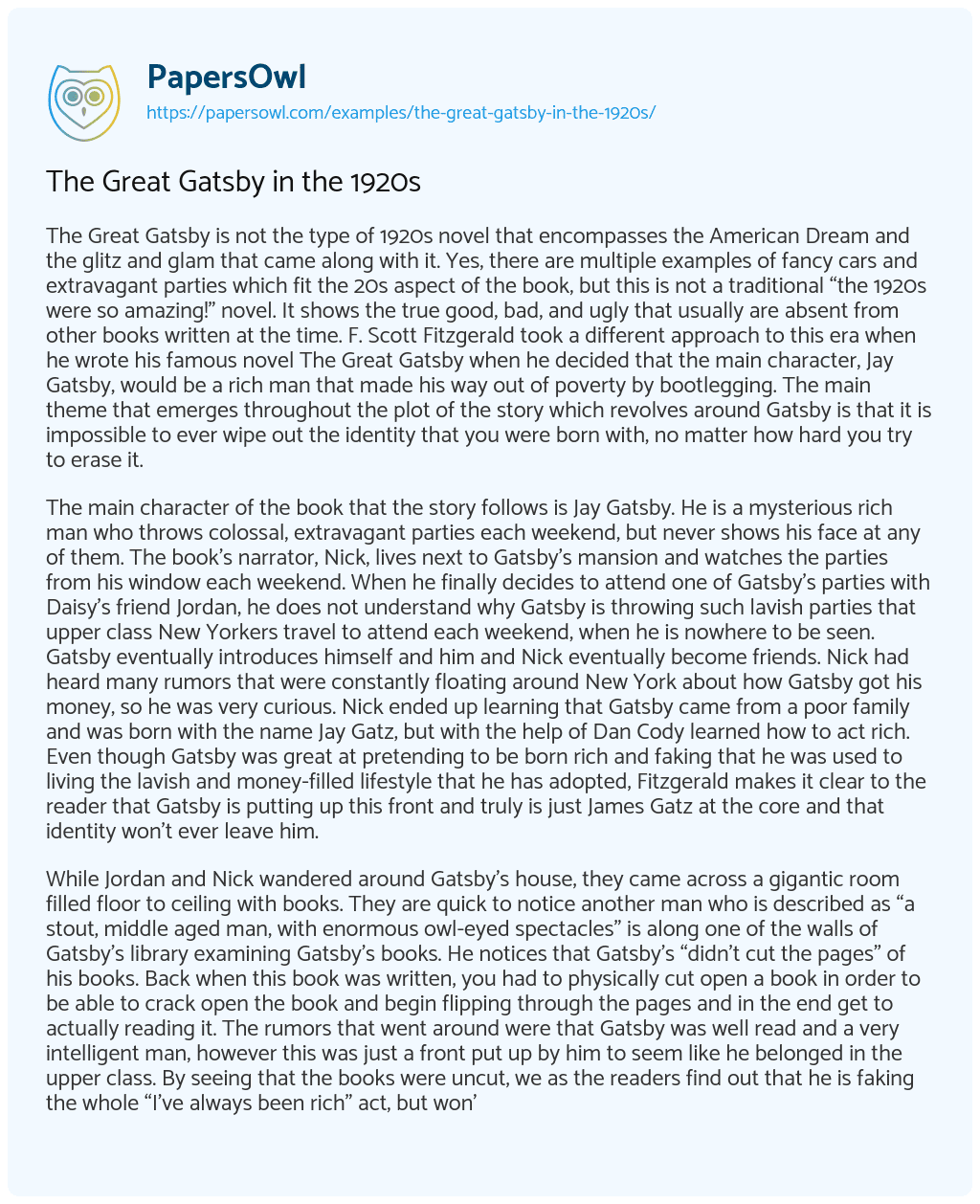 The Great Gatsby is not the type of 1920s novel that encompasses the American Dream and the glitz and glam that came along with it. Yes, there are multiple examples of fancy cars and extravagant parties which fit the 20s aspect of the book, but this is not a traditional “the 1920s were so amazing!” novel. It shows the true good, bad, and ugly that usually are absent from other books written at the time. F. Scott Fitzgerald took a different approach to this era when he wrote his famous novel The Great Gatsby when he decided that the main character, Jay Gatsby, would be a rich man that made his way out of poverty by bootlegging. The main theme that emerges throughout the plot of the story which revolves around Gatsby is that it is impossible to ever wipe out the identity that you were born with, no matter how hard you try to erase it.

The main character of the book that the story follows is Jay Gatsby. He is a mysterious rich man who throws colossal, extravagant parties each weekend, but never shows his face at any of them. The book’s narrator, Nick, lives next to Gatsby’s mansion and watches the parties from his window each weekend. When he finally decides to attend one of Gatsby’s parties with Daisy’s friend Jordan, he does not understand why Gatsby is throwing such lavish parties that upper class New Yorkers travel to attend each weekend, when he is nowhere to be seen. Gatsby eventually introduces himself and him and Nick eventually become friends. Nick had heard many rumors that were constantly floating around New York about how Gatsby got his money, so he was very curious. Nick ended up learning that Gatsby came from a poor family and was born with the name Jay Gatz, but with the help of Dan Cody learned how to act rich. Even though Gatsby was great at pretending to be born rich and faking that he was used to living the lavish and money-filled lifestyle that he has adopted, Fitzgerald makes it clear to the reader that Gatsby is putting up this front and truly is just James Gatz at the core and that identity won’t ever leave him.

While Jordan and Nick wandered around Gatsby’s house, they came across a gigantic room filled floor to ceiling with books. They are quick to notice another man who is described as “a stout, middle aged man, with enormous owl-eyed spectacles” is along one of the walls of Gatsby’s library examining Gatsby’s books. He notices that Gatsby’s “didn’t cut the pages” of his books. Back when this book was written, you had to physically cut open a book in order to be able to crack open the book and begin flipping through the pages and in the end get to actually reading it. The rumors that went around were that Gatsby was well read and a very intelligent man, however this was just a front put up by him to seem like he belonged in the upper class. By seeing that the books were uncut, we as the readers find out that he is faking the whole “I’ve always been rich” act, but won’t be able to keep it up forever because his true identity as a man who is not as well read as he is made out to be and most likely not as smart as he wants others to believe is revealed. The books in Gatsby’s library essentially reveal to the readers that Gatsby is a fraud.

Although Gatsby has done a decent job at keeping up his identity and persona that he has created, his uncut books prove that he is unable to ever keep up with trying to keep up going along with the façade he has tried so hard to put up. Additionally, to further back up this theme that is prevalent throughout the book, Gatsby’s true identity is revealed when Tom finally tells his wife Daisy who was previously in love with Jay Gatsby (note: not James Gatz) that all of Gatsby’s money was produced by bootlegging. In this particular scene, another aspect of Gatsby’s true identity of coming up from a poor family is revealed because nobody who is born rich, or people that have old money which Gatsby pretends to have inherited, is a bootlegger. At the end of the day, as the book progresses Gatsby is unable to keep more and more of his identity hidden until every single aspect of his upbringing and true identity are revealed. By writing this book, Fitzgerald ends up producing the theme that people cannot hide their true identities, regardless of how hard they try to cover their tracks and put up a façade.