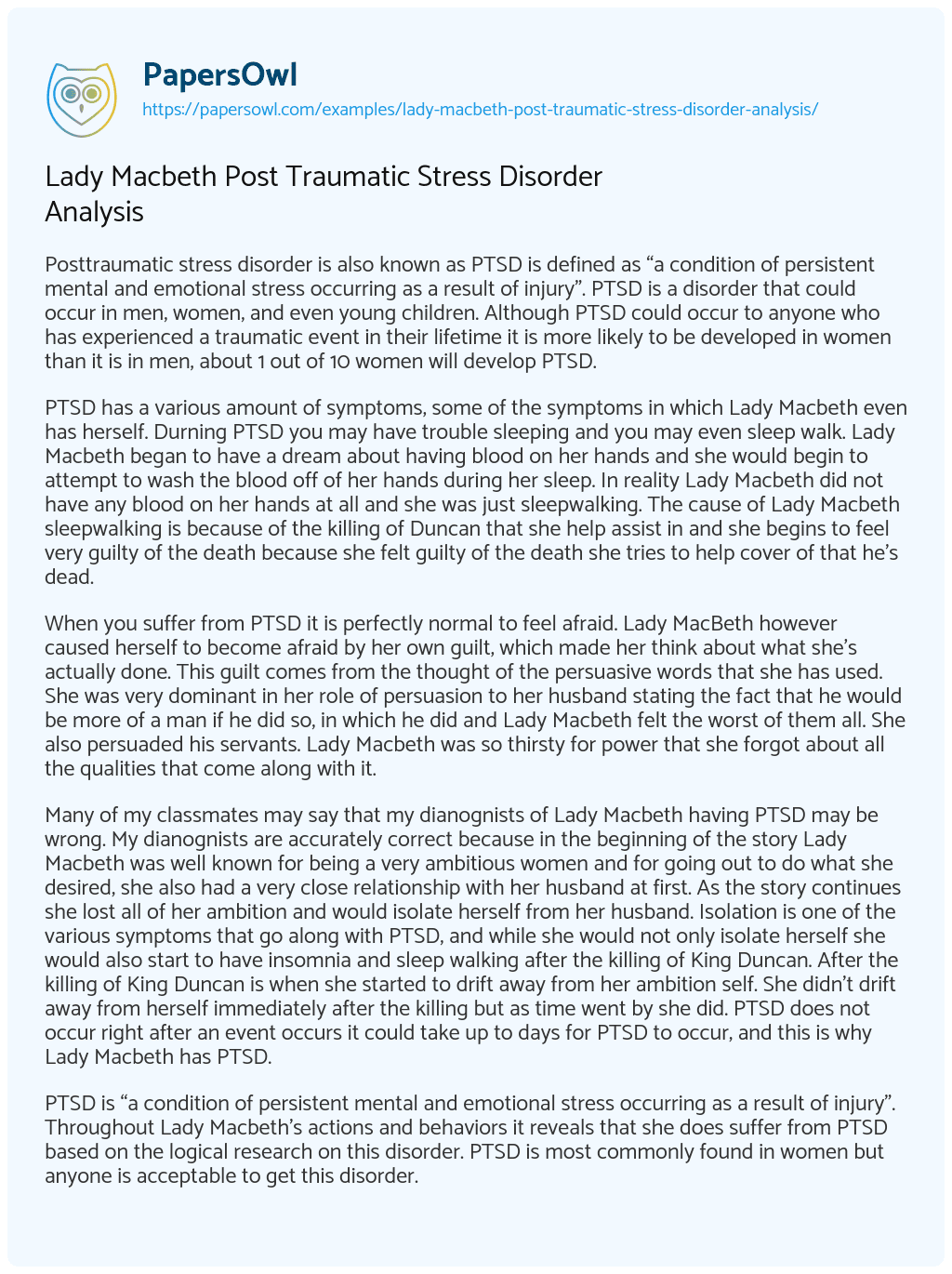 Posttraumatic stress disorder is also known as PTSD is defined as “a condition of persistent mental and emotional stress occurring as a result of injury”. PTSD is a disorder that could occur in men, women, and even young children. Although PTSD could occur to anyone who has experienced a traumatic event in their lifetime it is more likely to be developed in women than it is in men, about 1 out of 10 women will develop PTSD.

PTSD has a various amount of symptoms, some of the symptoms in which Lady Macbeth even has herself. Durning PTSD you may have trouble sleeping and you may even sleep walk. Lady Macbeth began to have a dream about having blood on her hands and she would begin to attempt to wash the blood off of her hands during her sleep. In reality Lady Macbeth did not have any blood on her hands at all and she was just sleepwalking. The cause of Lady Macbeth sleepwalking is because of the killing of Duncan that she help assist in and she begins to feel very guilty of the death because she felt guilty of the death she tries to help cover of that he’s dead.

When you suffer from PTSD it is perfectly normal to feel afraid. Lady MacBeth however caused herself to become afraid by her own guilt, which made her think about what she’s actually done. This guilt comes from the thought of the persuasive words that she has used. She was very dominant in her role of persuasion to her husband stating the fact that he would be more of a man if he did so, in which he did and Lady Macbeth felt the worst of them all. She also persuaded his servants. Lady Macbeth was so thirsty for power that she forgot about all the qualities that come along with it.

Many of my classmates may say that my dianognists of Lady Macbeth having PTSD may be wrong. My dianognists are accurately correct because in the beginning of the story Lady Macbeth was well known for being a very ambitious women and for going out to do what she desired, she also had a very close relationship with her husband at first. As the story continues she lost all of her ambition and would isolate herself from her husband. Isolation is one of the various symptoms that go along with PTSD, and while she would not only isolate herself she would also start to have insomnia and sleep walking after the killing of King Duncan. After the killing of King Duncan is when she started to drift away from her ambition self. She didn’t drift away from herself immediately after the killing but as time went by she did. PTSD does not occur right after an event occurs it could take up to days for PTSD to occur, and this is why Lady Macbeth has PTSD.

PTSD is “a condition of persistent mental and emotional stress occurring as a result of injury”. Throughout Lady Macbeth’s actions and behaviors it reveals that she does suffer from PTSD based on the logical research on this disorder. PTSD is most commonly found in women but anyone is acceptable to get this disorder.