The Issue of Women’s Discrimination 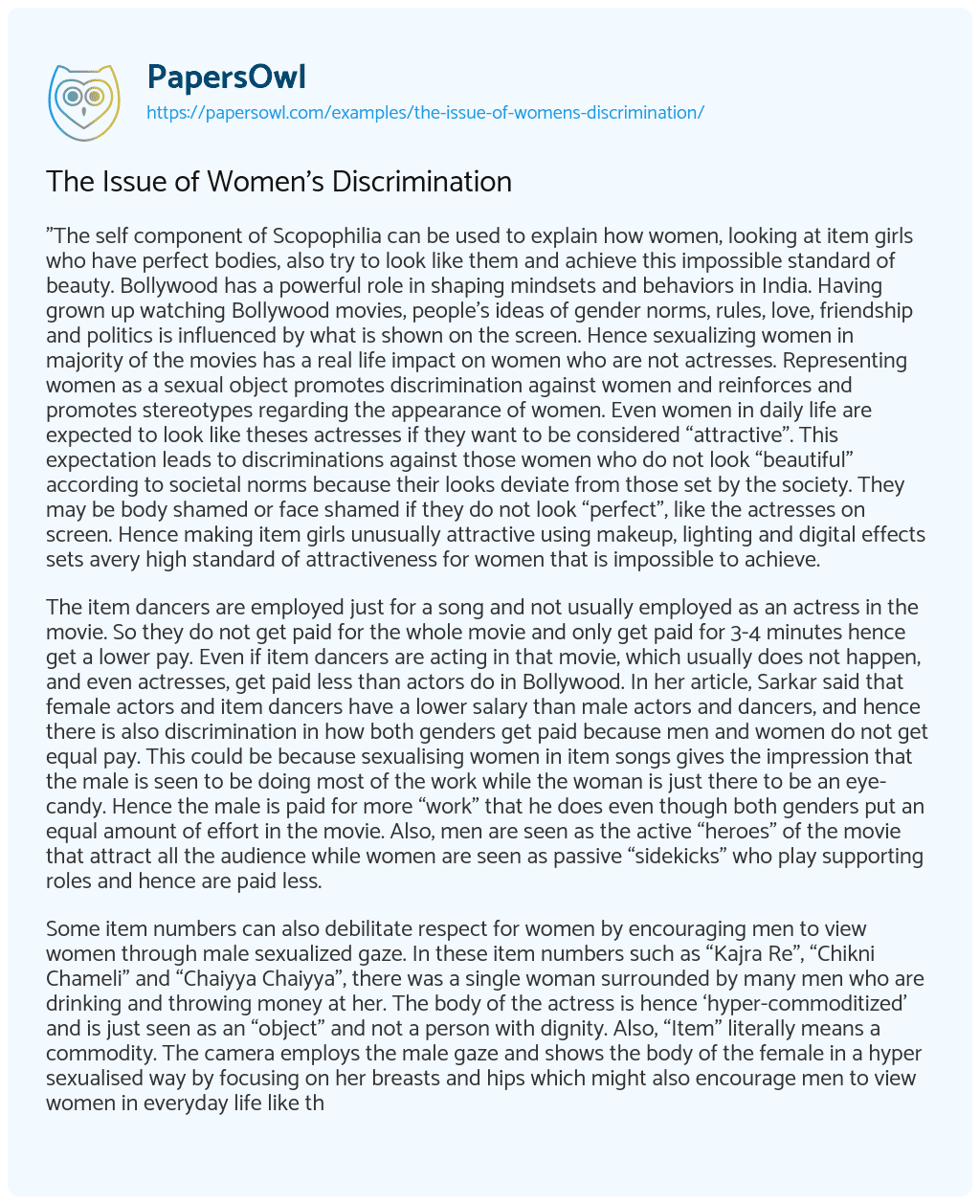 “The self component of Scopophilia can be used to explain how women, looking at item girls who have perfect bodies, also try to look like them and achieve this impossible standard of beauty. Bollywood has a powerful role in shaping mindsets and behaviors in India. Having grown up watching Bollywood movies, people’s ideas of gender norms, rules, love, friendship and politics is influenced by what is shown on the screen. Hence sexualizing women in majority of the movies has a real life impact on women who are not actresses. Representing women as a sexual object promotes discrimination against women and reinforces and promotes stereotypes regarding the appearance of women. Even women in daily life are expected to look like theses actresses if they want to be considered “attractive”. This expectation leads to discriminations against those women who do not look “beautiful” according to societal norms because their looks deviate from those set by the society. They may be body shamed or face shamed if they do not look “perfect”, like the actresses on screen. Hence making item girls unusually attractive using makeup, lighting and digital effects sets avery high standard of attractiveness for women that is impossible to achieve.

The item dancers are employed just for a song and not usually employed as an actress in the movie. So they do not get paid for the whole movie and only get paid for 3-4 minutes hence get a lower pay. Even if item dancers are acting in that movie, which usually does not happen, and even actresses, get paid less than actors do in Bollywood. In her article, Sarkar said that female actors and item dancers have a lower salary than male actors and dancers, and hence there is also discrimination in how both genders get paid because men and women do not get equal pay. This could be because sexualising women in item songs gives the impression that the male is seen to be doing most of the work while the woman is just there to be an eye-candy. Hence the male is paid for more “work” that he does even though both genders put an equal amount of effort in the movie. Also, men are seen as the active “heroes” of the movie that attract all the audience while women are seen as passive “sidekicks” who play supporting roles and hence are paid less.

Some item numbers can also debilitate respect for women by encouraging men to view women through male sexualized gaze. In these item numbers such as “Kajra Re”, “Chikni Chameli” and “Chaiyya Chaiyya”, there was a single woman surrounded by many men who are drinking and throwing money at her. The body of the actress is hence ‘hyper-commoditized’ and is just seen as an “object” and not a person with dignity. Also, “Item” literally means a commodity. The camera employs the male gaze and shows the body of the female in a hyper sexualised way by focusing on her breasts and hips which might also encourage men to view women in everyday life like that and contribute to the vulnerability of the sexualized female subject. In Bollywood songs, the men are usually trying to “get” the item girl and she plays “hard to get” but eventually caves in. This could also promote harassment on the streets; men might think that if a woman says no or stop or does not respond she is playing “hard to get”, just like the item girls, and hence they might push the woman more which would be non-consensual and hence harassment. Also, men might try to establish dominance over the women just like male actors establish dominance in front of item girls and “get” her.”

The Issue of Women's Discrimination. (2021, Feb 20). Retrieved from https://papersowl.com/examples/the-issue-of-womens-discrimination/

An Issue of Women’s International Rights