The Impacts of Legalizing Marijuana 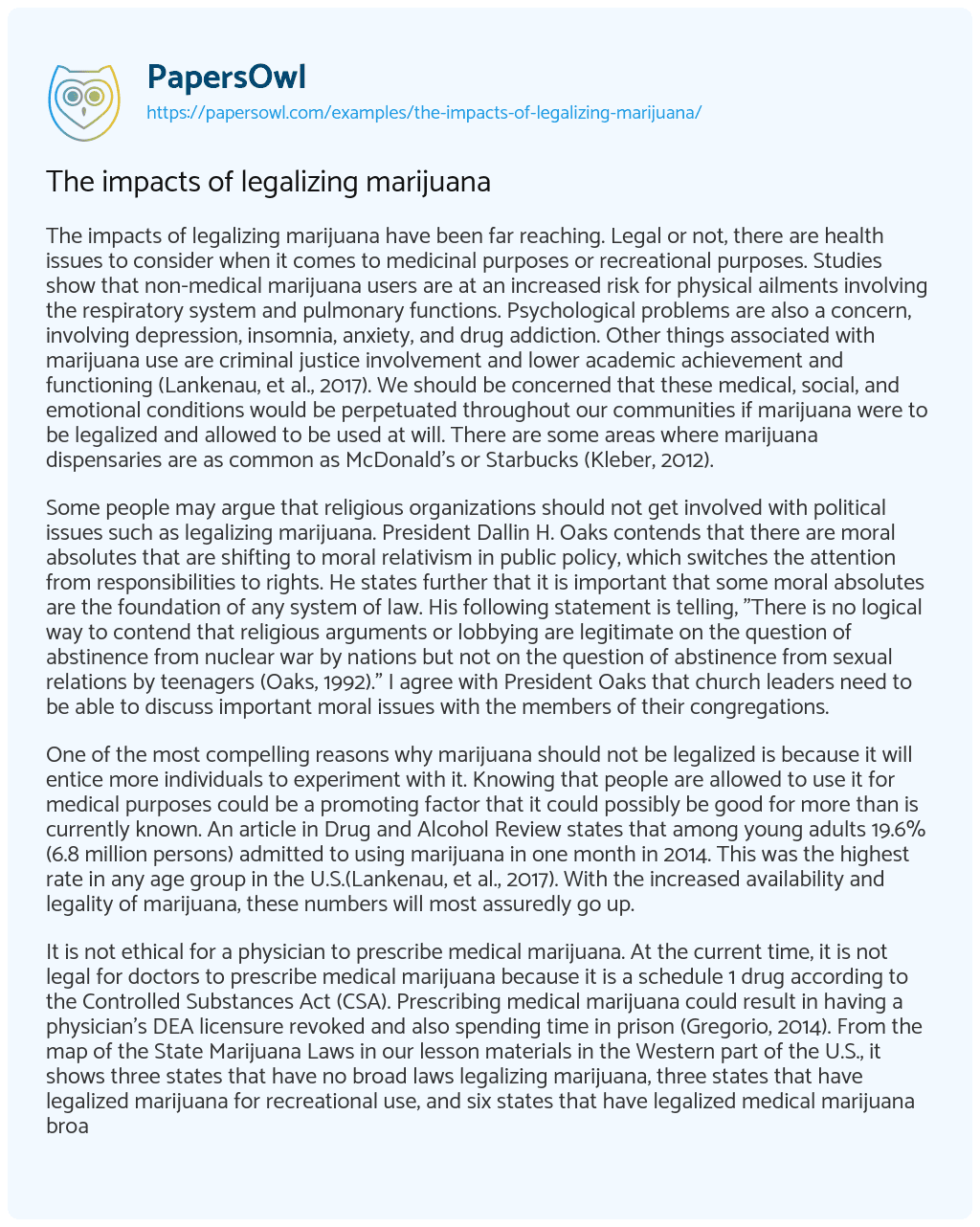 The impacts of legalizing marijuana have been far reaching. Legal or not, there are health issues to consider when it comes to medicinal purposes or recreational purposes. Studies show that non-medical marijuana users are at an increased risk for physical ailments involving the respiratory system and pulmonary functions. Psychological problems are also a concern, involving depression, insomnia, anxiety, and drug addiction. Other things associated with marijuana use are criminal justice involvement and lower academic achievement and functioning (Lankenau, et al., 2017). We should be concerned that these medical, social, and emotional conditions would be perpetuated throughout our communities if marijuana were to be legalized and allowed to be used at will. There are some areas where marijuana dispensaries are as common as McDonald’s or Starbucks (Kleber, 2012).

Some people may argue that religious organizations should not get involved with political issues such as legalizing marijuana. President Dallin H. Oaks contends that there are moral absolutes that are shifting to moral relativism in public policy, which switches the attention from responsibilities to rights. He states further that it is important that some moral absolutes are the foundation of any system of law. His following statement is telling, “There is no logical way to contend that religious arguments or lobbying are legitimate on the question of abstinence from nuclear war by nations but not on the question of abstinence from sexual relations by teenagers (Oaks, 1992).” I agree with President Oaks that church leaders need to be able to discuss important moral issues with the members of their congregations.

One of the most compelling reasons why marijuana should not be legalized is because it will entice more individuals to experiment with it. Knowing that people are allowed to use it for medical purposes could be a promoting factor that it could possibly be good for more than is currently known. An article in Drug and Alcohol Review states that among young adults 19.6% (6.8 million persons) admitted to using marijuana in one month in 2014. This was the highest rate in any age group in the U.S.(Lankenau, et al., 2017). With the increased availability and legality of marijuana, these numbers will most assuredly go up.

The impacts of legalizing marijuana. (2020, Feb 11). Retrieved from https://papersowl.com/examples/the-impacts-of-legalizing-marijuana/

Marijuana as a Psychoactive Drug

Marijuana Decriminalization in all States