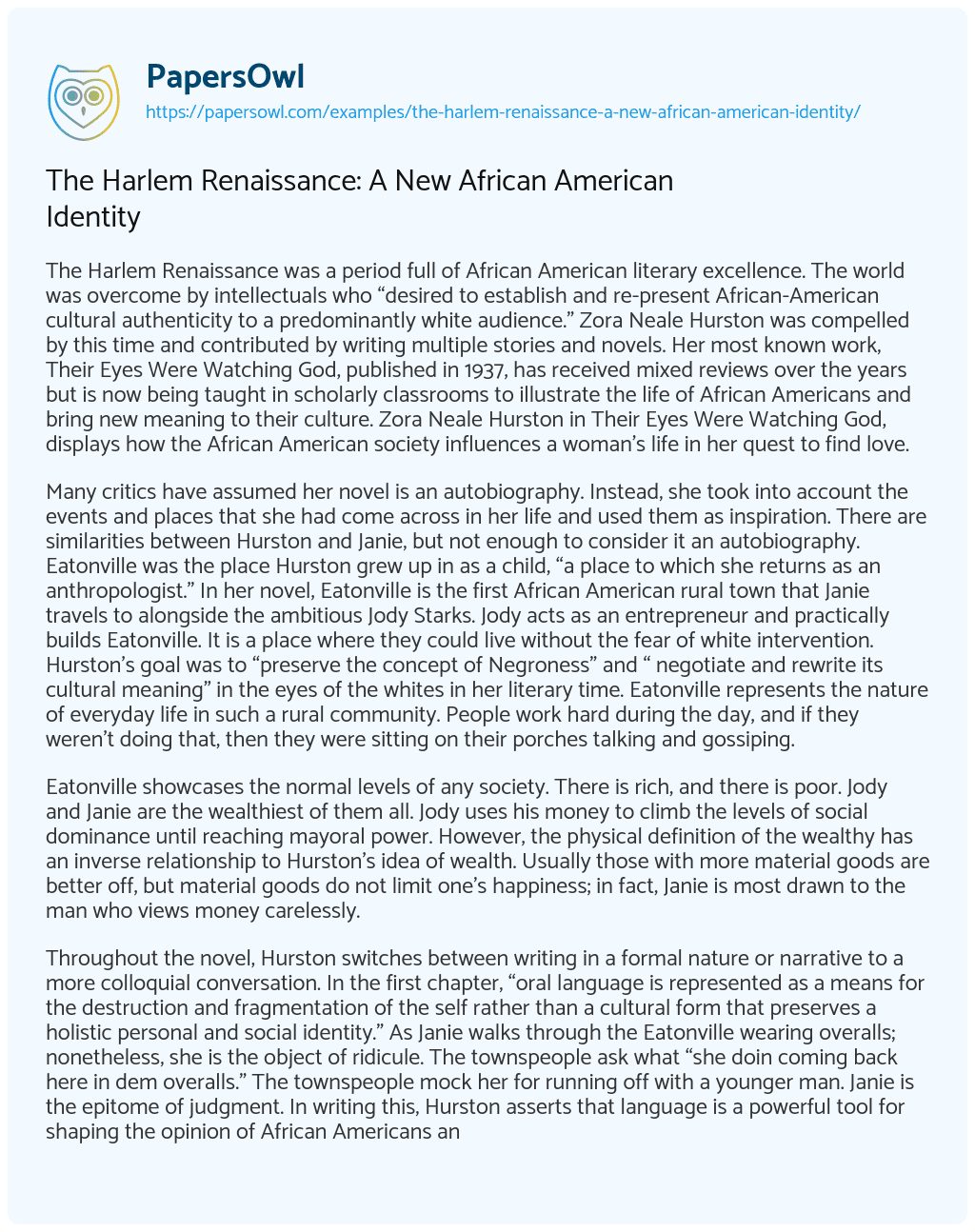 The Harlem Renaissance was a period full of African American literary excellence. The world was overcome by intellectuals who “desired to establish and re-present African-American cultural authenticity to a predominantly white audience.” Zora Neale Hurston was compelled by this time and contributed by writing multiple stories and novels. Her most known work, Their Eyes Were Watching God, published in 1937, has received mixed reviews over the years but is now being taught in scholarly classrooms to illustrate the life of African Americans and bring new meaning to their culture. Zora Neale Hurston in Their Eyes Were Watching God, displays how the African American society influences a woman’s life in her quest to find love.

Many critics have assumed her novel is an autobiography. Instead, she took into account the events and places that she had come across in her life and used them as inspiration. There are similarities between Hurston and Janie, but not enough to consider it an autobiography. Eatonville was the place Hurston grew up in as a child, “a place to which she returns as an anthropologist.” In her novel, Eatonville is the first African American rural town that Janie travels to alongside the ambitious Jody Starks. Jody acts as an entrepreneur and practically builds Eatonville. It is a place where they could live without the fear of white intervention. Hurston’s goal was to “preserve the concept of Negroness” and “ negotiate and rewrite its cultural meaning” in the eyes of the whites in her literary time. Eatonville represents the nature of everyday life in such a rural community. People work hard during the day, and if they weren’t doing that, then they were sitting on their porches talking and gossiping.

Eatonville showcases the normal levels of any society. There is rich, and there is poor. Jody and Janie are the wealthiest of them all. Jody uses his money to climb the levels of social dominance until reaching mayoral power. However, the physical definition of the wealthy has an inverse relationship to Hurston’s idea of wealth. Usually those with more material goods are better off, but material goods do not limit one’s happiness; in fact, Janie is most drawn to the man who views money carelessly.

Throughout the novel, Hurston switches between writing in a formal nature or narrative to a more colloquial conversation. In the first chapter, “oral language is represented as a means for the destruction and fragmentation of the self rather than a cultural form that preserves a holistic personal and social identity.” As Janie walks through the Eatonville wearing overalls; nonetheless, she is the object of ridicule. The townspeople ask what “she doin coming back here in dem overalls.” The townspeople mock her for running off with a younger man. Janie is the epitome of judgment. In writing this, Hurston asserts that language is a powerful tool for shaping the opinion of African Americans and their ideas. This talk, however, seems to divide the African American people against each other. For this reason, she received negative critics because the writers of that time wanted to depict African Americans as a united front, as a large family.

On that topic, Hurston has a strong emphasis on the structure of the family. In the beginning, young Janie was living with the only mother figure she has ever known–her grandmother. Nanny was a former slave and was raped by her white master resulting in the conception of Leafy. Leafy continued the cycle of unwed motherhood when her school teacher sexually assaulted her. Nanny values Janie’s physical well-being and financial security above all else, as they are traits she was never granted. For this reason, Nanny ships Janie off to marry Logan Killicks, an older man with land and a mule–financial security. However, while her grandmother was looking for stability, Janie was looking for love.

But, Janie’s relationship with Logan Killicks can be described as anything BUT love. Janie practically despises being married to the older man. She is forced to do physical labor and is treated more like the mule, than a human. Logan tells Janie she “ain’t got no particular place. It’s wherever Ah need yuh. Git uh move on yuh, and dat quick.”” Janie is an object in his mind, not a wife. He does not express himself to her in any form; he only tells her what to do.

However, when Jody Starks comes along, Janie witnesses excitement and youth and vision; she sees a new life. She quickly falls in love, abandoning Logan and following him to Eatonville. Janie loved her life, but only for a brief moment. As the mayor’s wife, Jody wanted her working in his store, and she resented him for it, as he didn’t work all that much himself. All he wanted to do was show off his beautiful wife to the town; she was his trophy (wife). Jody remarks to Janie that “de mayor’s wife is somethin’ different.” Anytime Janie wanted to talk, Jody did not listen. He silenced her. The lack of language reflected who had the power and who did not. Moreover, Janie no longer had the power of speech. Jody continued to confine and control Janie by forcing her to cover up her hair. Her hair was a symbol of her strength and individuality over men, and Jody completely covered it. So, upon his death twenty years later, although Janie was sad at first, she saw the opportunity for a new life.

Then comes Tea Cake. He became a part of her life with ease. He was unlike Janie other two husbands. He did activities out of the ordinary: he taught her how to play checkers, and how to fish. Unlike Logan, he expressed himself; unlike Jody, he listened to Janie. Through his communication skills, Janie found her voice and became an equal–just as he would like her too. When they moved to the Muck, Janie worked alongside him in the fields, only because she wanted to spend more time together–she was not forced into it. Tea Cake was neither obsessed with money nor material goods; he just wanted enough for his girl and him to live a happy life. Janie was not drawn to his money, but to his character. Tea Cake was Janie’s one true love.

Zora Neale Hurston in Their Eyes Were Watching God, establishes that by viewing the trials and tribulations of an African American women leads to a deeper connection to an African American life. Janie overcomes her “designated fate” by society’s standards, to unexpectedly fall in love with a man much younger and poorer than her. She escapes the pressures of society to marry for security, to find a life of happiness with her Tea Cake.

The Harlem Renaissance and the African American Experience