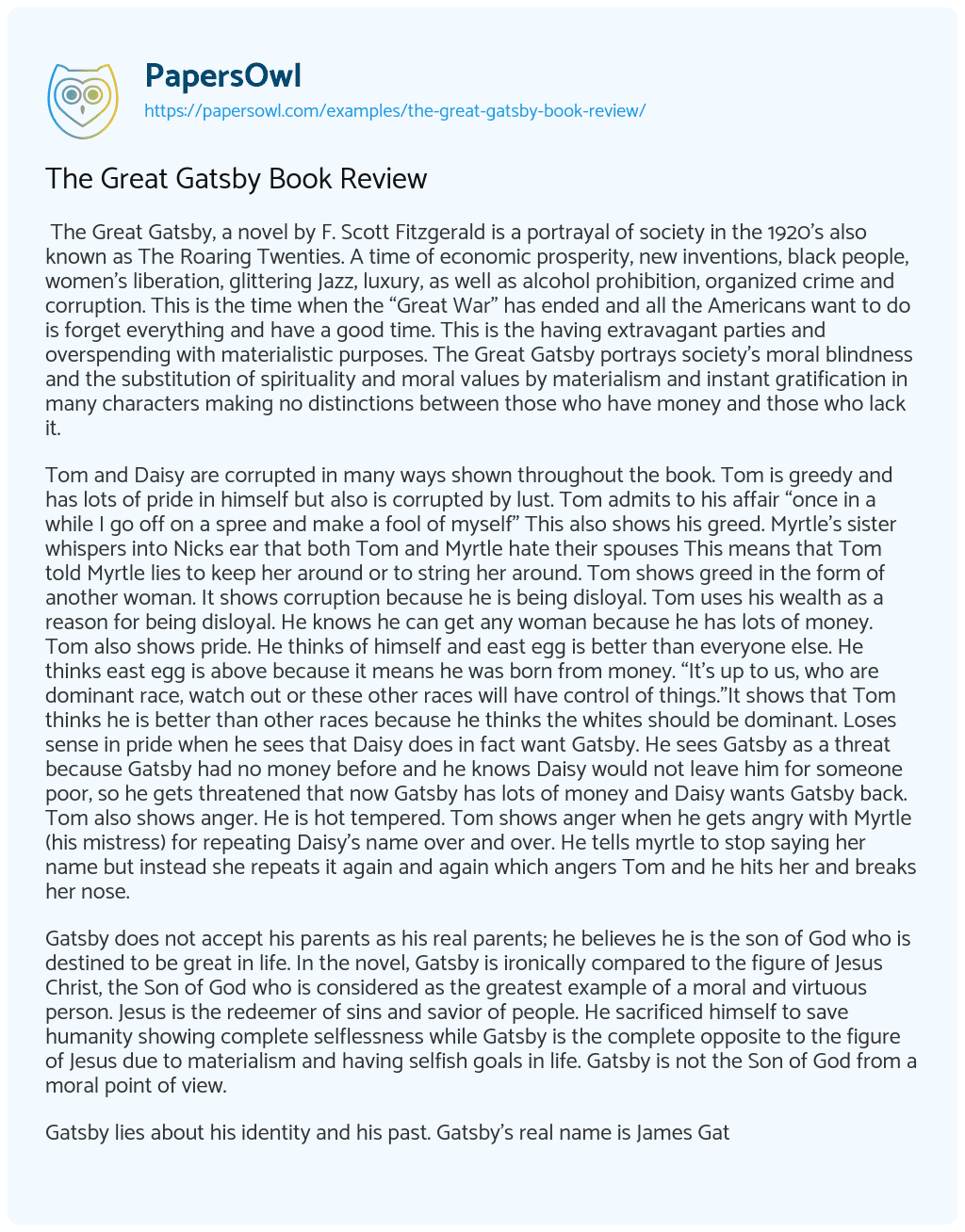 The Great Gatsby, a novel by F. Scott Fitzgerald is a portrayal of society in the 1920’s also known as The Roaring Twenties. A time of economic prosperity, new inventions, black people, women’s liberation, glittering Jazz, luxury, as well as alcohol prohibition, organized crime and corruption. This is the time when the “Great War” has ended and all the Americans want to do is forget everything and have a good time. This is the having extravagant parties and overspending with materialistic purposes. The Great Gatsby portrays society’s moral blindness and the substitution of spirituality and moral values by materialism and instant gratification in many characters making no distinctions between those who have money and those who lack it.

Tom and Daisy are corrupted in many ways shown throughout the book. Tom is greedy and has lots of pride in himself but also is corrupted by lust. Tom admits to his affair “once in a while I go off on a spree and make a fool of myself” This also shows his greed. Myrtle’s sister whispers into Nicks ear that both Tom and Myrtle hate their spouses This means that Tom told Myrtle lies to keep her around or to string her around. Tom shows greed in the form of another woman. It shows corruption because he is being disloyal. Tom uses his wealth as a reason for being disloyal. He knows he can get any woman because he has lots of money. Tom also shows pride. He thinks of himself and east egg is better than everyone else. He thinks east egg is above because it means he was born from money. “It’s up to us, who are dominant race, watch out or these other races will have control of things.”It shows that Tom thinks he is better than other races because he thinks the whites should be dominant. Loses sense in pride when he sees that Daisy does in fact want Gatsby. He sees Gatsby as a threat because Gatsby had no money before and he knows Daisy would not leave him for someone poor, so he gets threatened that now Gatsby has lots of money and Daisy wants Gatsby back. Tom also shows anger. He is hot tempered. Tom shows anger when he gets angry with Myrtle (his mistress) for repeating Daisy’s name over and over. He tells myrtle to stop saying her name but instead she repeats it again and again which angers Tom and he hits her and breaks her nose.

Gatsby does not accept his parents as his real parents; he believes he is the son of God who is destined to be great in life. In the novel, Gatsby is ironically compared to the figure of Jesus Christ, the Son of God who is considered as the greatest example of a moral and virtuous person. Jesus is the redeemer of sins and savior of people. He sacrificed himself to save humanity showing complete selflessness while Gatsby is the complete opposite to the figure of Jesus due to materialism and having selfish goals in life. Gatsby is not the Son of God from a moral point of view.

Gatsby lies about his identity and his past. Gatsby’s real name is James Gatz; his parents were poor farmers from North Dakota and he abandoned his family for money and selfish desires. He had obtained his fortune and status through illegal actions. He was a Bootlegger and are friends with Meyer Wolfsheim, a gambler that fixed the world series in 1919. Gatsby becomes great through immoral and sinful actions while Jesus is recognized by his moral and virtuous life. This shows how society’s view of what is right and wrong is distorted. “Who are you, anyhow? broke out Tom. You’re one of that bunch that hangs around with Meyer Wolfsheim… I found out what your ‘drug-stores’ were… He and this Wolfsheim bought up a lot of side-street drug stores here and in Chicago and sold grain alcohol over the counter. That’s one of his little stunts. I picked him for a bootlegger the first time I saw him, and I wasn’t far wrong.” (Page 127)

Gatsby has a materialistic and corrupted goal: Daisy. Daisy’s voice is “Full of money” and the diction used to describe her is similar to the diction used to talk about money “ It excited him, too, that many men had already loved Daisy; it increased her value in his eyes.” (Page 141) She represents the last piece to complete Gatsby’s American dream, but Gatsby’s goal is materialistic and hollow in nature. Gatsby commits adultery. He maintains a relationship with Daisy who is a married woman as well as he wills to break a family since Daisy and Tom have a daughter that Gatsby does not take into account. “I suppose the latest thing is to sit back and let Mr. Nobody from Nowhere make love to your wife. Well, if that’s the idea you can count me out. . . . Nowadays people begin by sneering at family life and family institutions, and next they’ll throw everything overboard and have intermarriage between black and white.” (Page 123-124)

Gatsby and Jesus both die at a young age but Jesus is venerated by all his followers after his death while Gatsby is completely forgotten and ignored after death portraying how corrupt is society. Gatsby has become useless to the partiers so they do not feel the need to attend the funeral, this emphasizes society’s inhumanity and avarice.

Carelessness in the Great Gatsby

Wealth in the Great Gatsby