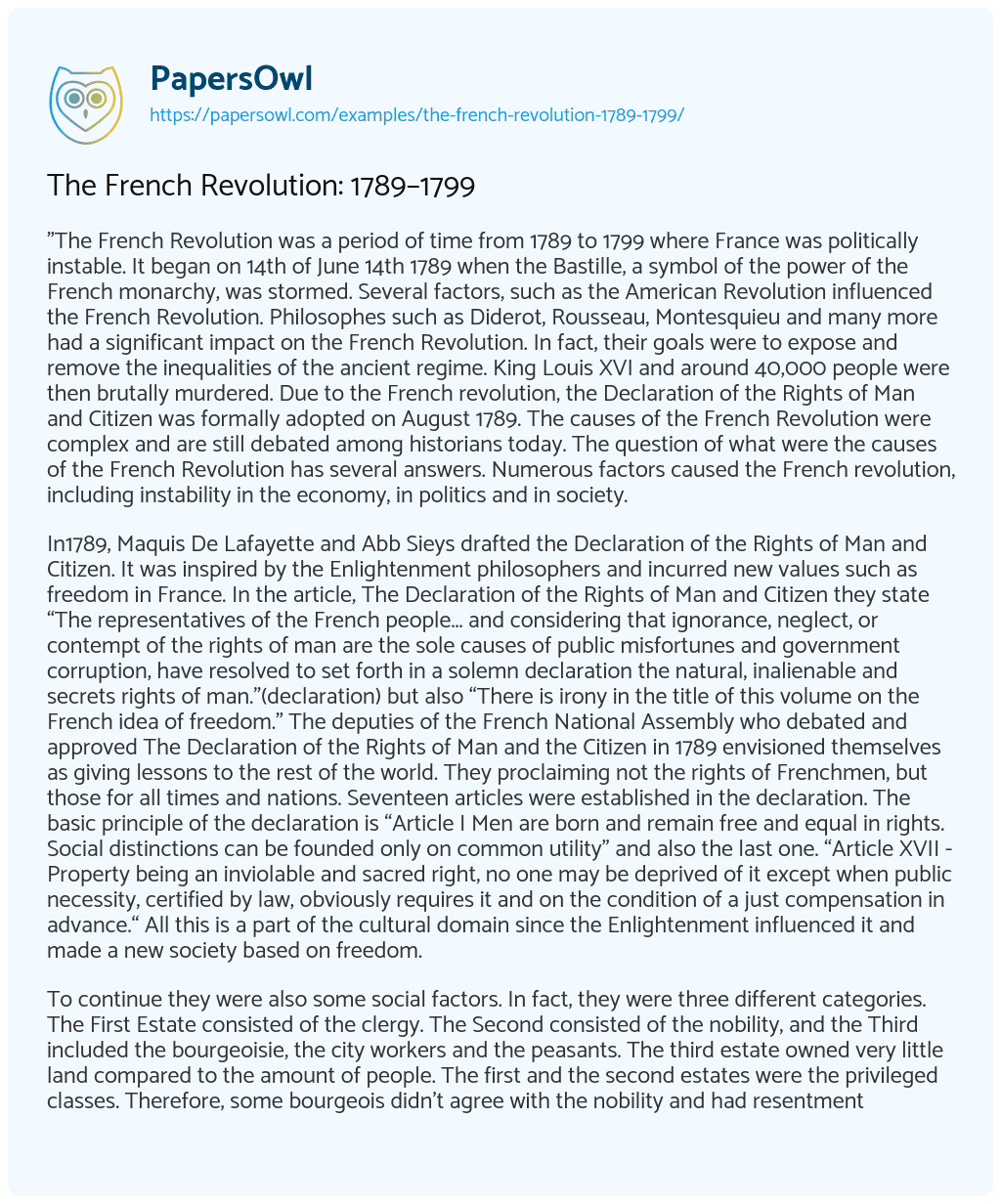 In1789, Maquis De Lafayette and Abb Sieys drafted the Declaration of the Rights of Man and Citizen. It was inspired by the Enlightenment philosophers and incurred new values such as freedom in France. In the article, The Declaration of the Rights of Man and Citizen they state “The representatives of the French people… and considering that ignorance, neglect, or contempt of the rights of man are the sole causes of public misfortunes and government corruption, have resolved to set forth in a solemn declaration the natural, inalienable and secrets rights of man.”(declaration) but also “There is irony in the title of this volume on the French idea of freedom.” The deputies of the French National Assembly who debated and approved The Declaration of the Rights of Man and the Citizen in 1789 envisioned themselves as giving lessons to the rest of the world. They proclaiming not the rights of Frenchmen, but those for all times and nations. Seventeen articles were established in the declaration. The basic principle of the declaration is “Article I Men are born and remain free and equal in rights. Social distinctions can be founded only on common utility” and also the last one. “Article XVII – Property being an inviolable and sacred right, no one may be deprived of it except when public necessity, certified by law, obviously requires it and on the condition of a just compensation in advance.“ All this is a part of the cultural domain since the Enlightenment influenced it and made a new society based on freedom.

To continue they were also some social factors. In fact, they were three different categories. The First Estate consisted of the clergy. The Second consisted of the nobility, and the Third included the bourgeoisie, the city workers and the peasants. The third estate owned very little land compared to the amount of people. The first and the second estates were the privileged classes. Therefore, some bourgeois didn’t agree with the nobility and had resentment towards the First and Second Estates. Many of them were against the Ancient Regime. The King kept 97% of the population in only one category which lead to some tension and made the bourgeois to support the revolution.

In addition, the political discontent of France was one of the main causes of the French Revolution. During the 17th and 18th century France had specific rules. In fact, they were ruled by an absolute government, also known as absolute monarchy. This style of government meant that someone had all the power and could lead the country by himself. It was King Louis XVI who had all the power during the French Revolution. The tensions in France due to rules led to heavy repercussions for those speaking out, such as jail. The third estate was also not allowed to vote for the election which caused even more tension since the second and third estate represented only 3% of the population. The French government was at that time unjust. Finally economic problems were also one of the main reasons that caused the French Revolution.

First the third estate were the only one paying taxes which leaded to tensions since the others estates didn’t have to pay any. France was now in debt due to the funding in the war. The French Revolution was caused by several factors such as social, political and economic. Majority of the people were in discontent with the king. Particularly between classes, in fact the first two estates were privileged and the third was very not really privileged and had to pay heavy taxes. The third estate did not get along with the first two. French kings spent a lot of money on wars for a long time and accumulated debt. The French Revolution was made because of France’s instability.

Causes of the French Revolution

Was the French Revolution Successful