The Exploration Age in Europe 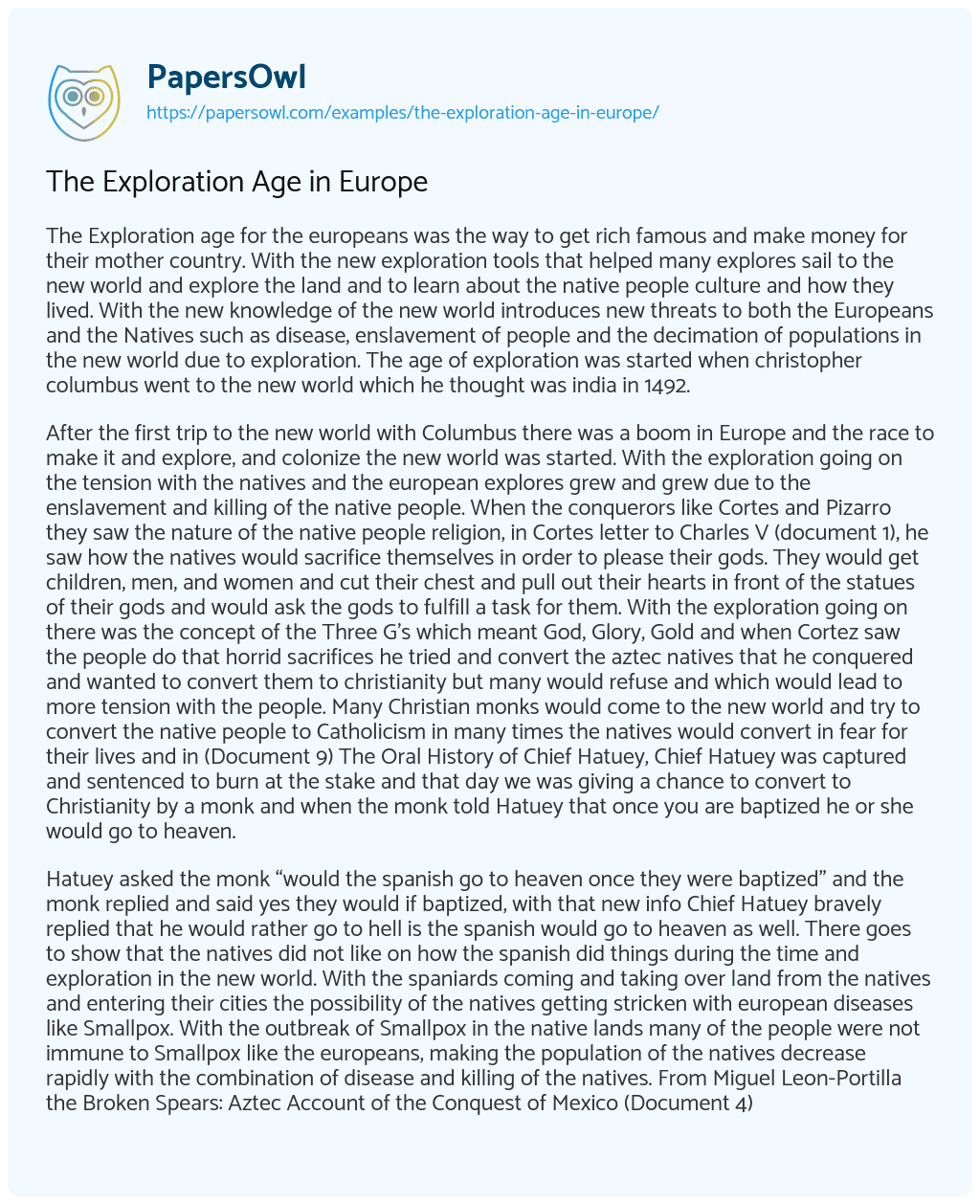 The Exploration age for the europeans was the way to get rich famous and make money for their mother country. With the new exploration tools that helped many explores sail to the new world and explore the land and to learn about the native people culture and how they lived. With the new knowledge of the new world introduces new threats to both the Europeans and the Natives such as disease, enslavement of people and the decimation of populations in the new world due to exploration. The age of exploration was started when christopher columbus went to the new world which he thought was india in 1492.

After the first trip to the new world with Columbus there was a boom in Europe and the race to make it and explore, and colonize the new world was started. With the exploration going on the tension with the natives and the european explores grew and grew due to the enslavement and killing of the native people. When the conquerors like Cortes and Pizarro they saw the nature of the native people religion, in Cortes letter to Charles V (document 1), he saw how the natives would sacrifice themselves in order to please their gods. They would get children, men, and women and cut their chest and pull out their hearts in front of the statues of their gods and would ask the gods to fulfill a task for them. With the exploration going on there was the concept of the Three G’s which meant God, Glory, Gold and when Cortez saw the people do that horrid sacrifices he tried and convert the aztec natives that he conquered and wanted to convert them to christianity but many would refuse and which would lead to more tension with the people. Many Christian monks would come to the new world and try to convert the native people to Catholicism in many times the natives would convert in fear for their lives and in (Document 9) The Oral History of Chief Hatuey, Chief Hatuey was captured and sentenced to burn at the stake and that day we was giving a chance to convert to Christianity by a monk and when the monk told Hatuey that once you are baptized he or she would go to heaven.

Hatuey asked the monk “would the spanish go to heaven once they were baptized” and the monk replied and said yes they would if baptized, with that new info Chief Hatuey bravely replied that he would rather go to hell is the spanish would go to heaven as well. There goes to show that the natives did not like on how the spanish did things during the time and exploration in the new world. With the spaniards coming and taking over land from the natives and entering their cities the possibility of the natives getting stricken with european diseases like Smallpox. With the outbreak of Smallpox in the native lands many of the people were not immune to Smallpox like the europeans, making the population of the natives decrease rapidly with the combination of disease and killing of the natives. From Miguel Leon-Portilla the Broken Spears: Aztec Account of the Conquest of Mexico (Document 4) describes the decimation of the population of the Aztec people when Smallpox started to spread across the land. It describes how the people were in pain and weren ‘t able to get up or move to find food so they would starve to death on their beds since the smallpox make the infected be in great deal of pain. With the conquest for Mexico and the plague outbreak of smallpox made the natives hate the european and make a greater impact of the people due to the exploration of the europeans at the time.

The exploration to the new world wasn ‘t all about the conquest and colonization of the new world, there was more reasons to travel to the new world like trade. The colombian exchange was the route that let the european trade with the native people, the european would trade stuff like livestocks and technology in exchange for new exotic foods like apples,pears, corn, cocoa beans, and coffee beans.

In Christopher Columbus Letter to Santangel ( Document 2) he states how the native people were he landed were naive and were eager to help and trade with the new things that Columbus had. Trade was a very good impact with the native people the exploration to the new world made the european countries wealthy with trade and the mining of gold and silver in mexico and peru. From Bernal Diaz The True History of the conquest of Mexico (document 3) he describes how the natives were creative and were able to make beautiful iron works of art as well iron tools, that some of the natives were able to read and write and learn to do astonishing things. That they had fields planted with trees and fruits such as apples and pears that the spanish would trade and take back home to Europe.

There is many impacts to the new world due to exploration and the most devastating impact of them all was the spread of disease wiping out many of the population in Mexico, the Caribbean, and Peru. In Geoffrey Cowley in the great Disease migration (Document 6) he states that there was about 40 to 50 million people living in the new world before Columbus arrived to the new world. The arrival of the european there was the arrival of germs that would cause disease which would decimate the natives killing millions of their population. That most people would die from disease and not from the sword and guns of the europeans. There has been many explorations to other lands which would have impacts like when the Romans started to expand to northern Europe into the Druids and other barbaric clan lands. The romans would force them out of there lands by killing them making the leave their homes and would kill the ones who would go against them and trying to reclaim the land. All though Exploration is what the people who are exploring make the impacts to the land weather if it ‘s bad or good it is what the people do that will make a difference to the land and the people who were living there already.

The Exploration Age in Europe. (2021, Mar 27). Retrieved from https://papersowl.com/examples/the-exploration-age-in-europe/

European Exploration of the Gulf of Mexico Global Studies

European Exploration to the “New World”