THE CAUSE of RACISM in AMERICA 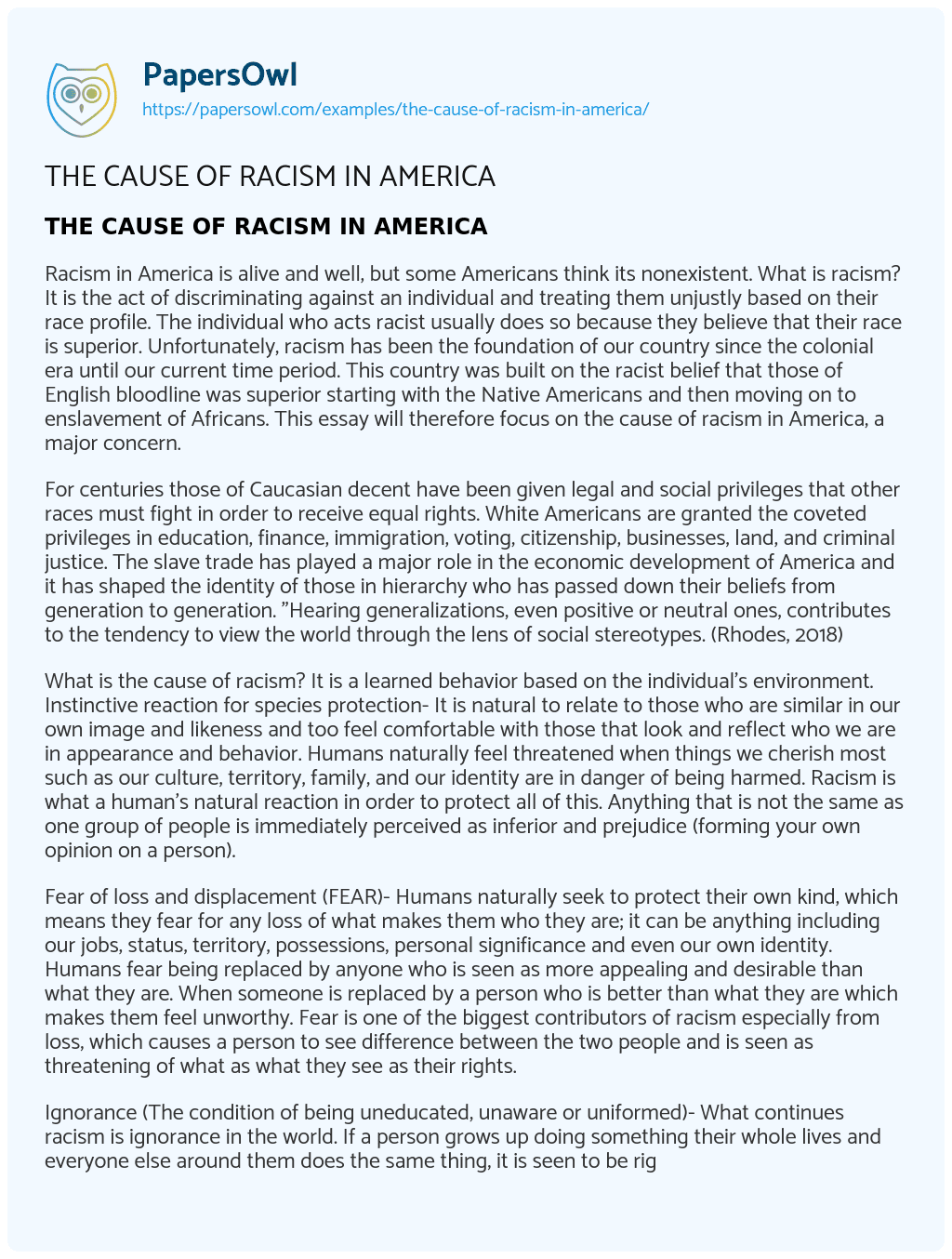 THE CAUSE OF RACISM IN AMERICA

Racism in America is alive and well, but some Americans think its nonexistent. What is racism? It is the act of discriminating against an individual and treating them unjustly based on their race profile. The individual who acts racist usually does so because they believe that their race is superior. Unfortunately, racism has been the foundation of our country since the colonial era until our current time period. This country was built on the racist belief that those of English bloodline was superior starting with the Native Americans and then moving on to enslavement of Africans. This essay will therefore focus on the cause of racism in America, a major concern.

For centuries those of Caucasian decent have been given legal and social privileges that other races must fight in order to receive equal rights. White Americans are granted the coveted privileges in education, finance, immigration, voting, citizenship, businesses, land, and criminal justice. The slave trade has played a major role in the economic development of America and it has shaped the identity of those in hierarchy who has passed down their beliefs from generation to generation. “Hearing generalizations, even positive or neutral ones, contributes to the tendency to view the world through the lens of social stereotypes. (Rhodes, 2018)

What is the cause of racism? It is a learned behavior based on the individual’s environment. Instinctive reaction for species protection- It is natural to relate to those who are similar in our own image and likeness and too feel comfortable with those that look and reflect who we are in appearance and behavior. Humans naturally feel threatened when things we cherish most such as our culture, territory, family, and our identity are in danger of being harmed. Racism is what a human’s natural reaction in order to protect all of this. Anything that is not the same as one group of people is immediately perceived as inferior and prejudice (forming your own opinion on a person).

Fear of loss and displacement (FEAR)- Humans naturally seek to protect their own kind, which means they fear for any loss of what makes them who they are; it can be anything including our jobs, status, territory, possessions, personal significance and even our own identity. Humans fear being replaced by anyone who is seen as more appealing and desirable than what they are. When someone is replaced by a person who is better than what they are which makes them feel unworthy. Fear is one of the biggest contributors of racism especially from loss, which causes a person to see difference between the two people and is seen as threatening of what as what they see as their rights.

Ignorance (The condition of being uneducated, unaware or uniformed)- What continues racism is ignorance in the world. If a person grows up doing something their whole lives and everyone else around them does the same thing, it is seen to be right even if it is morally wrong it may be to another human being that does not share the same outlook on life. A group of people will not see anything wrong with their actions because they see their actions as correct. The only way to stop this ignorance is through education and awareness of their actions and what the consequences may be. Until a person’s ignorance is educated, it will continue to thrive racism.

Lack of self-love, feeling of unworthiness and desire to feel superior- People who are the most racist tend to be people who lack confidence, self-esteem and most of all self-love. A racist person throws all their negative feelings onto others that are viewed as weak and vulnerable. When a person truly loves himself or herself and appreciates who they are as a person, they can appreciate others as well. Racism comes from the feeling of being worthless, being victimized, and lacking the opportunities others may have. These feelings of being a ‘failure’ means that person needs a scapegoat to make themselves feel better; usually this being a person that is weaker than the racist. Racist human beings tend to feel insignificant, isolated, wronged and unloved, and they feel comfort in blaming others. A cause of racism is not a social act but is an individual act. The causes of racism begin with an individual person and can only be fixed by addressing an individual’s actions.

Racism is one of the most common issues in humanity. It haunts our past and can degrade our future. Many people on earth don’t know what causes racism, yet most of us are racist. To give racism a smaller effect we need to find the causes and fix them. These are six of many causes of racism.

Upbringing: Parents have a significant effect on what their child believes and what they think. Every time the parent says or reacts harshly towards someone of a different race, they are giving their child a message that racism is the right thing to do. Hate comes from your family and is hard to change; it can also become a part of your personality and who you are.

Peer Pressure: Your friends can have the same effect on you as your parents do. You have chosen these people to be your friends, so you are likely to listen to them. Therefore, you are more likely to agree with what they are saying about things like people from different races. This can lead you to becoming racist.
Personal Experiences: If someone from a certain race has assaulted you, you are more likely to be afraid towards people of that race. This is normal; it is natural for people to react this way. It is the same as when a colleague or friend betrays you, you are likely to have an opinion on that person’s race or culture. It is hard not to be racist because of these experiences; it goes against your survival instinct.

Stereotypes: Stereotyping is a common cause of racism. It is expressed through television, radio, internet, music and books. The result they have can make more people become stereotypes. When a person of a young age is exposed to stereotypes or to groups who are stereotyped, they will assume that all are like this.

Unfamiliarity: One of the most common causes of racism is unfamiliarity. Some people become fearful of what they don’t know or understand. If a child has grown up with people from only their race, then the child is more likely to become racist towards that race. This is not always the case but when someone has been given negative stereotypes and doesn’t have the life experience of being around people from a different race, the person is more likely to be racist. Therefore, it is important for children to be around people from different races: to ensure that their minds adapt and to make sure they don’t believe in false stereotypes in the future.

Selfishness: Selfishness is another cause of racism. We can become very selfish as humans, caring only about our self and our race. If a child is not taught to respect others, then the likely-hood of them becoming racist increases. People who are caring and not selfish are more likely not to be racist.

THE CAUSE OF RACISM IN AMERICA. (2020, Feb 14). Retrieved from https://papersowl.com/examples/the-cause-of-racism-in-america/

Racism in the USA