The Book Describing Medicare and other Social Programs 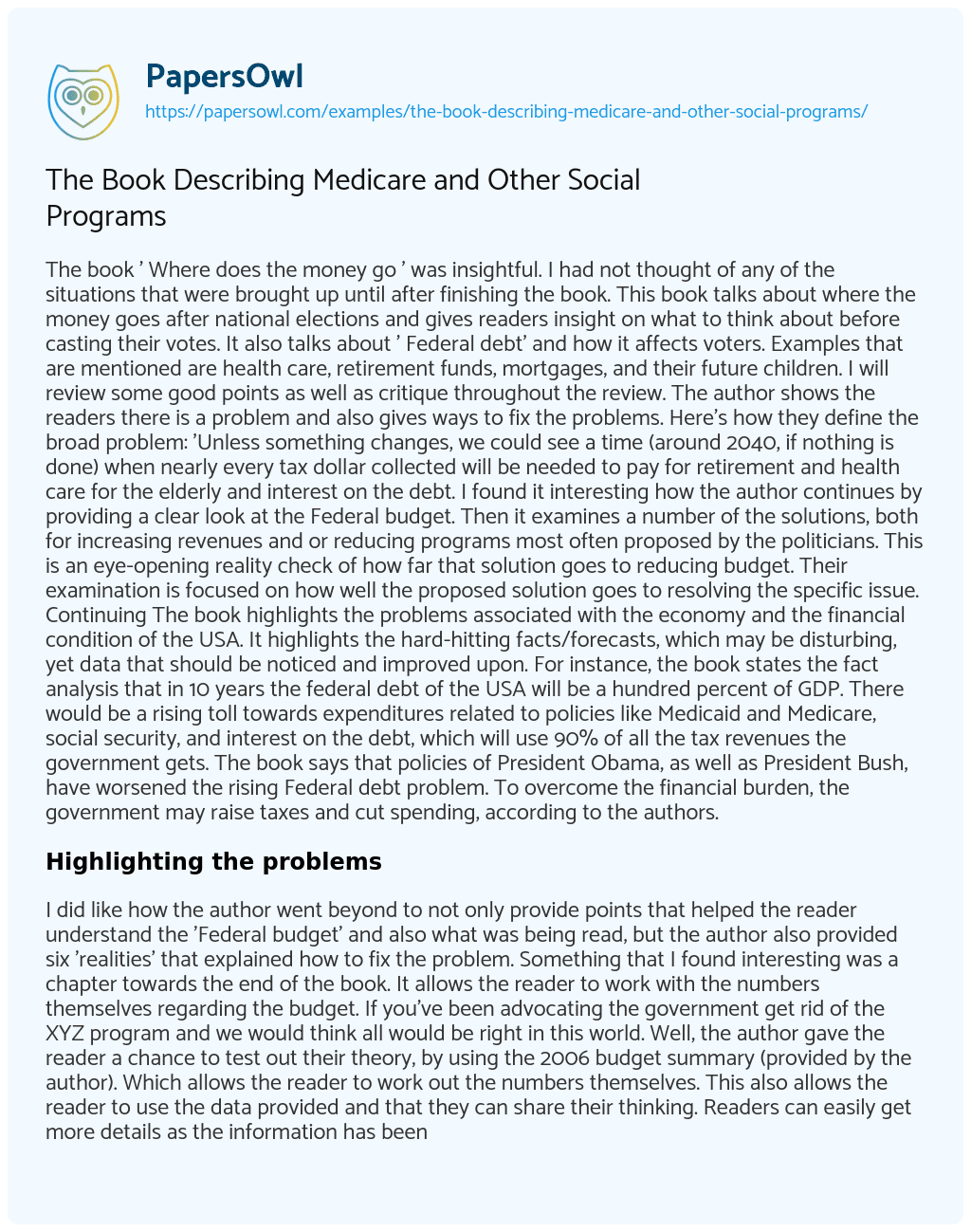 The book ‘ Where does the money go ‘ was insightful. I had not thought of any of the situations that were brought up until after finishing the book. This book talks about where the money goes after national elections and gives readers insight on what to think about before casting their votes. It also talks about ‘ Federal debt’ and how it affects voters. Examples that are mentioned are health care, retirement funds, mortgages, and their future children. I will review some good points as well as critique throughout the review. The author shows the readers there is a problem and also gives ways to fix the problems. Here’s how they define the broad problem: ‘Unless something changes, we could see a time (around 2040, if nothing is done) when nearly every tax dollar collected will be needed to pay for retirement and health care for the elderly and interest on the debt. I found it interesting how the author continues by providing a clear look at the Federal budget. Then it examines a number of the solutions, both for increasing revenues and or reducing programs most often proposed by the politicians. This is an eye-opening reality check of how far that solution goes to reducing budget. Their examination is focused on how well the proposed solution goes to resolving the specific issue. Continuing The book highlights the problems associated with the economy and the financial condition of the USA. It highlights the hard-hitting facts/forecasts, which may be disturbing, yet data that should be noticed and improved upon. For instance, the book states the fact analysis that in 10 years the federal debt of the USA will be a hundred percent of GDP. There would be a rising toll towards expenditures related to policies like Medicaid and Medicare, social security, and interest on the debt, which will use 90% of all the tax revenues the government gets. The book says that policies of President Obama, as well as President Bush, have worsened the rising Federal debt problem. To overcome the financial burden, the government may raise taxes and cut spending, according to the authors.

I did like how the author went beyond to not only provide points that helped the reader understand the ‘Federal budget’ and also what was being read, but the author also provided six ‘realities’ that explained how to fix the problem. Something that I found interesting was a chapter towards the end of the book. It allows the reader to work with the numbers themselves regarding the budget. If you’ve been advocating the government get rid of the XYZ program and we would think all would be right in this world. Well, the author gave the reader a chance to test out their theory, by using the 2006 budget summary (provided by the author). Which allows the reader to work out the numbers themselves. This also allows the reader to use the data provided and that they can share their thinking. Readers can easily get more details as the information has been presented accurately. Most of the data of the book data and financial information has been sourced from government policies and budgets itself and therefore any allegation of bias cannot be made. The authors have made sense of every data, policy, and details they have been discussed in the book. They have made it easy for the reader to know the real accounting effects of appeasing policies and programs of government. Apart from government insurance policies like Medicaid and others, the book discusses other budget-related issues in detail as well. These include the spending made by the US government towards war (fought by the USA in countries including Afghanistan and Iraq), defense spending, space pending, foreign aids given by the USA to developing and underdeveloped countries, and others. The book tries to make readers aware of the shortfalls and economic drawbacks of the popular policies of the US government and brings to the fore the adverse impacts of these policies in the long term. With in-depth analysis, charts, and visuals, the authors have succeeded in exposing the causes of the federal deficit. They also make a call to action and propose solutions that will make the US economy more secure in the future.

Let’s Talk about it

In December of 2003, President George W. Bush signed the Medicare prescription drug, improvement, and modernization act into law. This became the largest overhaul of Medicare since its enactment in 1968. Before then Prescription drug prices grew, which made it difficult for low-income senior citizens with Medicare to afford their medications without some kind of assistance. President Bush helped many people with receiving needed health care at an affordable price. “According to the Congressional Budget Office (CBO), drug spending per person grew at an annual rate exceeding 10% each year from 1995 through 2002”. At the signing ceremony for Medicare Part D President Bush stated: “These reforms are the act of a vibrant and compassionate government. We show our concern for the dignity of our seniors by giving them quality healthcare. We show our respect for seniors by giving them more choices and more control over their decision making. We’re putting individuals in charge of their healthcare decisions. What was the impact? Well, “enrollment in Medicare Part D plans first opened in 2006 when more than 30.5 million Americans signed up. Since then, growth in Part D enrollment has largely kept pace year-over-year with overall Medicare enrollment growth” (Eric Revell In terms of cost… There’s always the good, the bad, and the ugly. By the time Bush left the office the problem had doubled. Healthcare prices are rising .. I’m sure you’re thinking maybe there could have been a better way? yes, there could have.

There are a lot of charts and visuals to help the reader fully understand the issues being discussed. I have never been a fan of graphs, tables, and or bullet points while reading books. I love to read so seeing any of the listed above is not something I look forward to seeing, especially throughout the book. However, despite my personal opinions, I can see some readers enjoying those, they were helpful and made it easier for readers to comprehend the topic at hand. The book is somewhat short. Being bias regardless of what one may think sometimes people can be biased without even realizing their biases. However, I can say I was a little nervous once our previous presidents were mentioned. ‘Whose fault is it’? Anyone could side with who they voted for, and blame this person or that person. But not the authors. I am unfamiliar with politics or anything related to politics. The authors broke down so much and explained in detail each budget for both former presidents. I did not read or get the slightest thought that the author was being biased. It all seemed to be factual, especially since the author chose to use data from the government, this allowed the readers to make any conclusions that were drawn. If you haven’t already noticed I don’t have much to criticize. However, if I were to criticize something it would probably have to be the terms medical care and health care I was intrigued the entire time throughout the book while reading. Something I liked the most about the book, would probably have to be the “Five signs you are being a lazy citizen”. I enjoyed reading it. They not only talked about politicians but us good citizens as well. The reader should know that we all play a huge part in everything. Even though some us may not know much about politics or even understand it (like myself), it is up to us to register to vote and actually vote, know who we are voting for and why, not just vote only in presidential elections, listen to the candidate’s debates and (of course my favorite) actually read the articles/news and not just the headlines!

In Conclusion, Bittle and Johnson did such a great job for this book, They should commend themselves. The book was not only a great read, but they’ve created a resource for a voter regardless of their party, and done it with clarity, wit, much respect and some real hope that the crisis can be turned around or fixed. The two authors have authored an unsparing and irreverent guide, which can help even the laypersons understand the implications of financial decisions. They seem to think that there are solutions to be had, and are clear that the best impetus for those solutions is to have informed citizens to ask its political class to stop playing and help us get to the problem at hand that is in store to fix it all.

The Book Describing Medicare and Other Social Programs. (2021, Oct 18). Retrieved from https://papersowl.com/examples/the-book-describing-medicare-and-other-social-programs/

Medicare in the United States

Medicare is very Beneficial for the United States