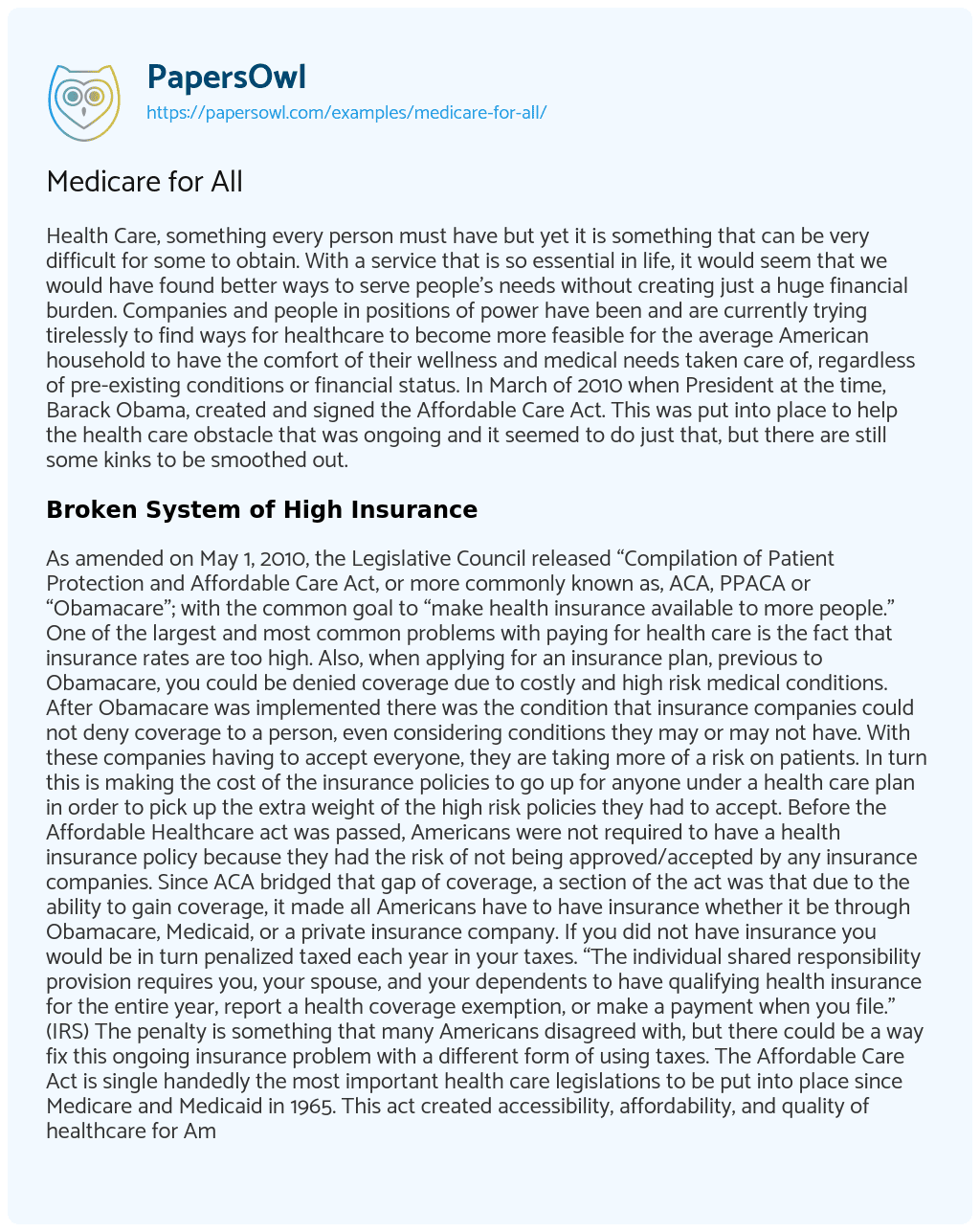 Health Care, something every person must have but yet it is something that can be very difficult for some to obtain. With a service that is so essential in life, it would seem that we would have found better ways to serve people’s needs without creating just a huge financial burden. Companies and people in positions of power have been and are currently trying tirelessly to find ways for healthcare to become more feasible for the average American household to have the comfort of their wellness and medical needs taken care of, regardless of pre-existing conditions or financial status. In March of 2010 when President at the time, Barack Obama, created and signed the Affordable Care Act. This was put into place to help the health care obstacle that was ongoing and it seemed to do just that, but there are still some kinks to be smoothed out.

As amended on May 1, 2010, the Legislative Council released “Compilation of Patient Protection and Affordable Care Act, or more commonly known as, ACA, PPACA or “Obamacare”; with the common goal to “make health insurance available to more people.” One of the largest and most common problems with paying for health care is the fact that insurance rates are too high. Also, when applying for an insurance plan, previous to Obamacare, you could be denied coverage due to costly and high risk medical conditions. After Obamacare was implemented there was the condition that insurance companies could not deny coverage to a person, even considering conditions they may or may not have. With these companies having to accept everyone, they are taking more of a risk on patients. In turn this is making the cost of the insurance policies to go up for anyone under a health care plan in order to pick up the extra weight of the high risk policies they had to accept. Before the Affordable Healthcare act was passed, Americans were not required to have a health insurance policy because they had the risk of not being approved/accepted by any insurance companies. Since ACA bridged that gap of coverage, a section of the act was that due to the ability to gain coverage, it made all Americans have to have insurance whether it be through Obamacare, Medicaid, or a private insurance company. If you did not have insurance you would be in turn penalized taxed each year in your taxes. “The individual shared responsibility provision requires you, your spouse, and your dependents to have qualifying health insurance for the entire year, report a health coverage exemption, or make a payment when you file.” (IRS) The penalty is something that many Americans disagreed with, but there could be a way fix this ongoing insurance problem with a different form of using taxes. The Affordable Care Act is single handedly the most important health care legislations to be put into place since Medicare and Medicaid in 1965. This act created accessibility, affordability, and quality of healthcare for Americans everywhere. This act has resolved some problems that have been in long standing with American care and has caused the uninsured rate to go down by 43 percent. Policy makers should not reform ACA, but instead continue to build the progress already made to the Health Insurance Marketplaces introducing a public plan option in areas lacking individual market competition, and taking actions to reduce prescription drug costs, Medicare for all does just that. By taking our system and simply adding better qualities into it would better our current system tremendously.

Ideology of Medicare for All

Back in September of 2017, Bernie Sanders introduced his design of changing the way health insurance existed. He states “Health care must be recognized as a right, not a privilege. Every man, woman and child in our country should be able to access the health care they need regardless of their income.” The idea was Medicare for All, also known as M4A, this is a single-payer idea, meaning we would get most of our funding from the government and health cost would be paid for in American tax dollars, replacing our current system of commercial health care with a federally administered health care system. Currently, Medicare is only obtainable for people over the age of 65, certain young people with disabilities, as well as people with ESRD. If Medicare for All were to be passed, all Americans could benefit from the Medicare system that is already in place. “The only long-term solution to America’s health care crisis is a single-payer national health care program.” (Sanders) Statistics show that after the Affordable Care Act was passed, “an estimated twenty million Americans gained insurance coverage from ACA” (Greenburg). Even though the amount of Americans who are now insured increased, there is still a large chunk of people who do not have an insurance plan. The single-payer idea would provide for the uninsured Americans.

Implementing this into our government would eliminated out-of-pocket spending that is already being done in each household with deductibles and/or copays, as well as, take away the dependence on private insurance companies and insure more efficiently working doctors. Based off one of Sanders political campaign sites this system would include but not limited to coverage on “inpatient to outpatient care; preventive to emergency care; primary care to specialty care, including long-term and palliative care; vision, hearing and oral health care; mental health and substance abuse services; as well as prescription medications, medical equipment, supplies, diagnostics and treatments.” This is expanding the range of services, everyone would gain access to, that may have been limited in a commercial plan. With this system you would be able to choose a healthcare provider without worrying if it specifically is “in-network” with your plan.

With a federally administered system you are separating insurance plans from employment, meaning that employees would not have to worry about losing insurance after leaving a particular employer. When taking insurance plans away from a job, it eliminates the toss up working Americans are making between getting a better insurance plan or a higher wage. Another positive to taking away workplace insurance plans, is the room for promotion and growth of entrepreneurship. In our current society, there is so much more acceptance and means for upcoming generations to have self proclaimed jobs, increasing the amount of jobs the entrepreneurship path will create due to advancing technology. Forbes describes it as, “A new high velocity workplace is emerging – a world of work characterized by the rapid development of new knowledge, an accelerating rate of industry disruption and advancing technology.” (Coughlin)

As discussed previously, if you were not insured within that year period, consequently you would be penalized in your taxes. This is one of many problems many Americans had with Obamacare and after “proposing” this ideology of Medicare for All in my Town Hall breakout session, it was clear that the people do not want to “pay for other people’s healthcare”. So how could we make a system that relied on American tax dollars work? By giving incentives to our people. For example, the way the break down of the so called “payment” for healthcare will depend on the family size and income. But say one year you are charged “X” amount in your taxes for your health care, but you did not have to go to the doctor all year, you would be given a form of credit or money back for unused “prepaid” expenses. Not only could you give credit but another incentive for Americans to live a healthier lifestyle. A new study suggests that, “The U.S. spends about twice what other high-income nations do on health care but has the lowest life expectancy and the highest infant mortality rates…” (Rapaport). Not only does a healthier living standard, decrease the price that the United States would be spending on health care yearly, but it gives Americans a better standard of living, in addition to the chance to get money back each tax year. With the studies conducted on how Medicare for All would change our spending, it showed that in the beginning it would cost more for our government, but after about 10 years it will have covered itself and then we would see tremendously less spending on healthcare state wide. “A recent report about Senator Bernie Sanders’ “Medicare for All” plan calls attention to a substantial federal cost increase of $32.6 trillion in spending over 10 years. But, the report also reveals that total cost of healthcare spending would decrease over that 10-year period.” (Potkul) Sequentially, it would redirect how we are paying for our healthcare plans and lower the cost the average family is spending on insurance and healthcare expenses.

Medicare for All, is a system that is currently being discussed in our nation with the hope to install it into our current healthcare plan. This could be the next step to fixing the ongoing issues with health care as a whole. This ideology leaves no one behind and would allow proper coverage to every American.

Medicare for All. (2021, Oct 18). Retrieved from https://papersowl.com/examples/medicare-for-all/

Medicare is very Beneficial for the United States

Medicare in the United States

The Book Describing Medicare and other Social Programs