The Benefits of Veganism on Animal Rights 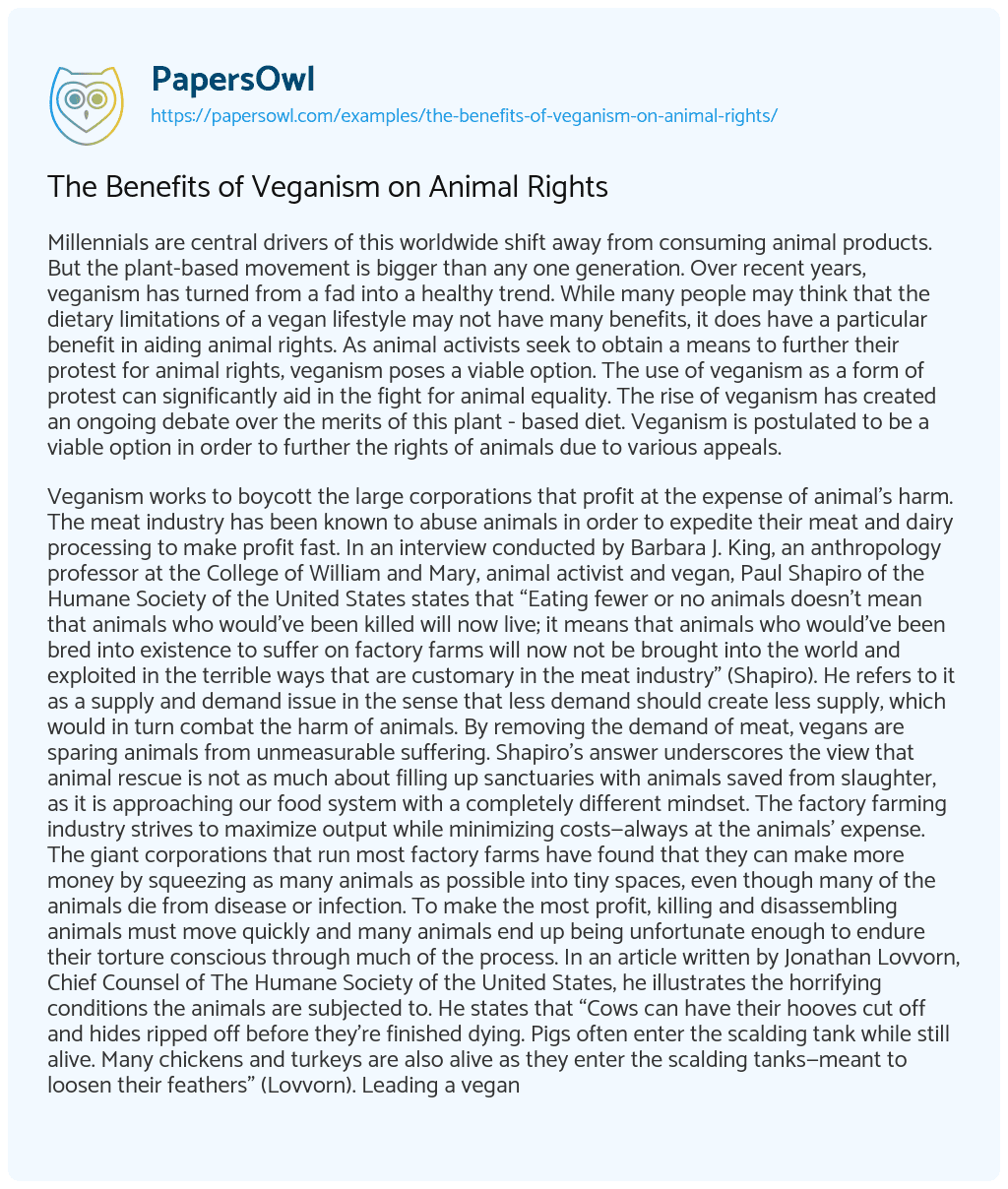 Millennials are central drivers of this worldwide shift away from consuming animal products. But the plant-based movement is bigger than any one generation. Over recent years, veganism has turned from a fad into a healthy trend. While many people may think that the dietary limitations of a vegan lifestyle may not have many benefits, it does have a particular benefit in aiding animal rights. As animal activists seek to obtain a means to further their protest for animal rights, veganism poses a viable option. The use of veganism as a form of protest can significantly aid in the fight for animal equality. The rise of veganism has created an ongoing debate over the merits of this plant – based diet. Veganism is postulated to be a viable option in order to further the rights of animals due to various appeals.

Veganism works to boycott the large corporations that profit at the expense of animal’s harm. The meat industry has been known to abuse animals in order to expedite their meat and dairy processing to make profit fast. In an interview conducted by Barbara J. King, an anthropology professor at the College of William and Mary, animal activist and vegan, Paul Shapiro of the Humane Society of the United States states that “Eating fewer or no animals doesn’t mean that animals who would’ve been killed will now live; it means that animals who would’ve been bred into existence to suffer on factory farms will now not be brought into the world and exploited in the terrible ways that are customary in the meat industry” (Shapiro). He refers to it as a supply and demand issue in the sense that less demand should create less supply, which would in turn combat the harm of animals. By removing the demand of meat, vegans are sparing animals from unmeasurable suffering. Shapiro’s answer underscores the view that animal rescue is not as much about filling up sanctuaries with animals saved from slaughter, as it is approaching our food system with a completely different mindset. The factory farming industry strives to maximize output while minimizing costs—always at the animals’ expense. The giant corporations that run most factory farms have found that they can make more money by squeezing as many animals as possible into tiny spaces, even though many of the animals die from disease or infection. To make the most profit, killing and disassembling animals must move quickly and many animals end up being unfortunate enough to endure their torture conscious through much of the process. In an article written by Jonathan Lovvorn, Chief Counsel of The Humane Society of the United States, he illustrates the horrifying conditions the animals are subjected to. He states that “Cows can have their hooves cut off and hides ripped off before they’re finished dying. Pigs often enter the scalding tank while still alive. Many chickens and turkeys are also alive as they enter the scalding tanks—meant to loosen their feathers” (Lovvorn). Leading a vegan lifestyle leads to the boycott of of the meat industries that thrive off of the harming of animals.

Veganism works to counteract speciesism, the assumption of human superiority leading to the exploitation of animals. Speciesists hold the interests of their own species to a higher standard and use them to supercede the affairs of members of other species. If an animal suffers, there should be no moral justification for refusing to take their suffering into consideration. By eating vegan, people can counter speciesism. Opposing speciesism doesn’t mean treating all species the same in all situations, it means not using an individual’s species as the basis for harming or protecting them. According to Jonathan Lovvorn, “If it’s wrong to kill a dog for food, then it’s also wrong to kill a chicken or pig, as there are no significant differences in their desire to avoid fear and death” (Lovvorn). There seems to be prevalent hypocrisy in opposing the harm of dogs and cats, but viewing farmed animals such as cows, pigs, and chickens as objects to be turned into food. Veganism can help put an end on the the arbitrary lines that determine which animals are eaten and which are spared by considering all beings lived as valuable enough to save. A vegan diet is the best way to join the movement to oppose speciesism.

Animal products are an unconscious part of daily life, from small leather wallets carried in the pockets of thousands of men to classy fur coats claiming to be “faux fur” worn by women throughout the winter. Every day we make decisions condemning the lives of animals for a trivial question in our life– what should I wear today?. While some people may think to wear their sleek leather boat shoes or their leather belt, vegans know better. The “use of clothes, shoes or furnishings made with the skins, hair, or feathers of animals” come from large factory-farms in which animals are raised for slaughter and their plumage and skin collected for consumer products. Vegans wear “plant based fabrics, such as cotton, linen or hemp, along with manmade fabrics like polyester and nylon.” The use of plant-based and man-made fabrics reduces the animal clothing industry’s ecological impact on other sentient beings with desires, thoughts, and spirits of their own. Not only are the animals mistreated in these types of factories, such as overcrowded cages, force-fed an unnatural diet in order to increase weight, and injected with hormones, but also, they are slaughtered in an inhumane manner. For example, majority of male chickens are either suffocated or are compressed alive. Through the veganism movement, the economic pressure applied to animal products is heavily increased, reducing their profits, and saving the lives of countless animals.

Many people, especially animal activists, believe that veganism is not an effective way to fuel the fight for animal rights because it does not take quick action. These critics are adamant in their belief that a person transitioning into a vegan lifestyle will not affect the meat industry. They think that the meat market is expanding because there are ever more people on Earth, but for every person who steps away from animal products, the market adjusts accordingly. People do save animals by their choices and if more people were to go vegan, people would begin to notice those market changes on a far more expansive level. But just because vegans are at the moment a small voice in the wilderness, doesn’t mean they aren’t making a difference to the lives of whatever number possible.

Animal rights are given no thought when they are being exploited for their products. Action must be taken against these abuses. Veganism is an effective means to furthering the silent protest against the exploitation of animals. There is no doubt that being vegan gives up a large amount of choices in daily life, the benefits far outweigh the costs. While animal products look lovely and are fashionable, they’re harvested in an inhumane manner under the poor, unsanitary conditions of industrial animal farms. Additionally, the dietary restrictions employ methods of economic pressure unto large agricultural companies that mistreat their animals in order to create food products such as honey, milk, and cheese.Veganism is not only healthy for the average person, but also beneficial to the environment and the animals whom we share this world.

The Benefits of Veganism on Animal Rights. (2019, Jan 02). Retrieved from https://papersowl.com/examples/the-benefits-of-veganism-on-animal-rights/

A Better Understanding of Veganism

Why Everyone should Convert to Veganism

Positive Effect of Veganism on Environment

Benefits of a Vegan Lifestyle

Is Veganism Detrimental to One’s Health