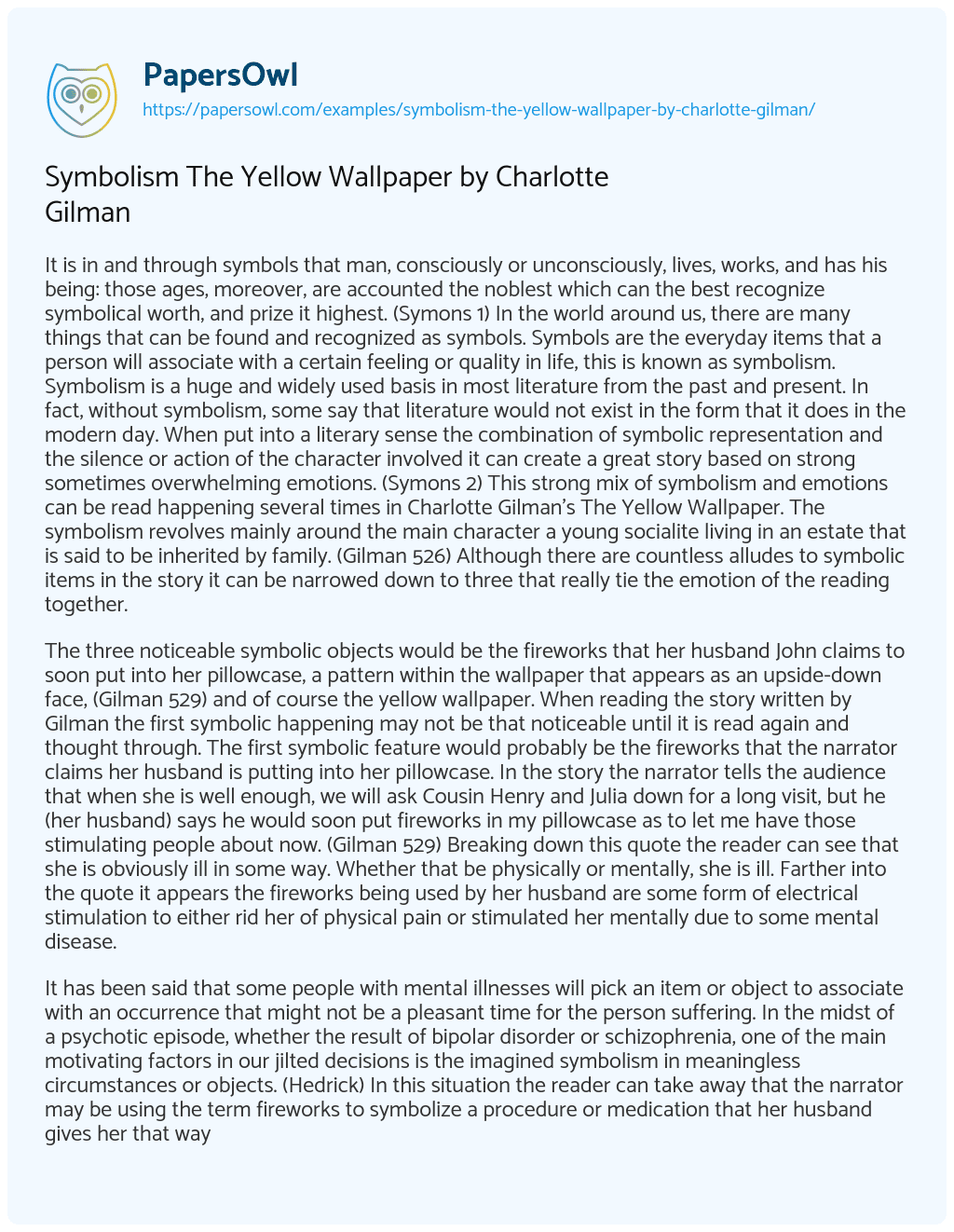 It is in and through symbols that man, consciously or unconsciously, lives, works, and has his being: those ages, moreover, are accounted the noblest which can the best recognize symbolical worth, and prize it highest. (Symons 1) In the world around us, there are many things that can be found and recognized as symbols. Symbols are the everyday items that a person will associate with a certain feeling or quality in life, this is known as symbolism. Symbolism is a huge and widely used basis in most literature from the past and present. In fact, without symbolism, some say that literature would not exist in the form that it does in the modern day. When put into a literary sense the combination of symbolic representation and the silence or action of the character involved it can create a great story based on strong sometimes overwhelming emotions. (Symons 2) This strong mix of symbolism and emotions can be read happening several times in Charlotte Gilman’s The Yellow Wallpaper. The symbolism revolves mainly around the main character a young socialite living in an estate that is said to be inherited by family. (Gilman 526) Although there are countless alludes to symbolic items in the story it can be narrowed down to three that really tie the emotion of the reading together.

The three noticeable symbolic objects would be the fireworks that her husband John claims to soon put into her pillowcase, a pattern within the wallpaper that appears as an upside-down face, (Gilman 529) and of course the yellow wallpaper. When reading the story written by Gilman the first symbolic happening may not be that noticeable until it is read again and thought through. The first symbolic feature would probably be the fireworks that the narrator claims her husband is putting into her pillowcase. In the story the narrator tells the audience that when she is well enough, we will ask Cousin Henry and Julia down for a long visit, but he (her husband) says he would soon put fireworks in my pillowcase as to let me have those stimulating people about now. (Gilman 529) Breaking down this quote the reader can see that she is obviously ill in some way. Whether that be physically or mentally, she is ill. Farther into the quote it appears the fireworks being used by her husband are some form of electrical stimulation to either rid her of physical pain or stimulated her mentally due to some mental disease.

It has been said that some people with mental illnesses will pick an item or object to associate with an occurrence that might not be a pleasant time for the person suffering. In the midst of a psychotic episode, whether the result of bipolar disorder or schizophrenia, one of the main motivating factors in our jilted decisions is the imagined symbolism in meaningless circumstances or objects. (Hedrick) In this situation the reader can take away that the narrator may be using the term fireworks to symbolize a procedure or medication that her husband gives her that way she doesn’t think of it as bad and it affects her in a less stressful manor. Therefore, meaning that she is given the simulation of feeling better without the actual need for people to be around to make her feel as though she isn’t ill anymore. The next object that can be considered symbolic would be the upside down face the narrator sees in the wallpaper. In the beginning of line 68 she begins by telling the reader how there is a recurrent spot where the pattern lolls like a broken neck, (Gilman 529) as if maybe someone who has hung themselves. This could be symbolic to her since she may feel like a captive due to her referred illness and may possible feel like that could be her one way out of the torturous life she has become accustomed to.