Symbolism in their Eyes were Watching God 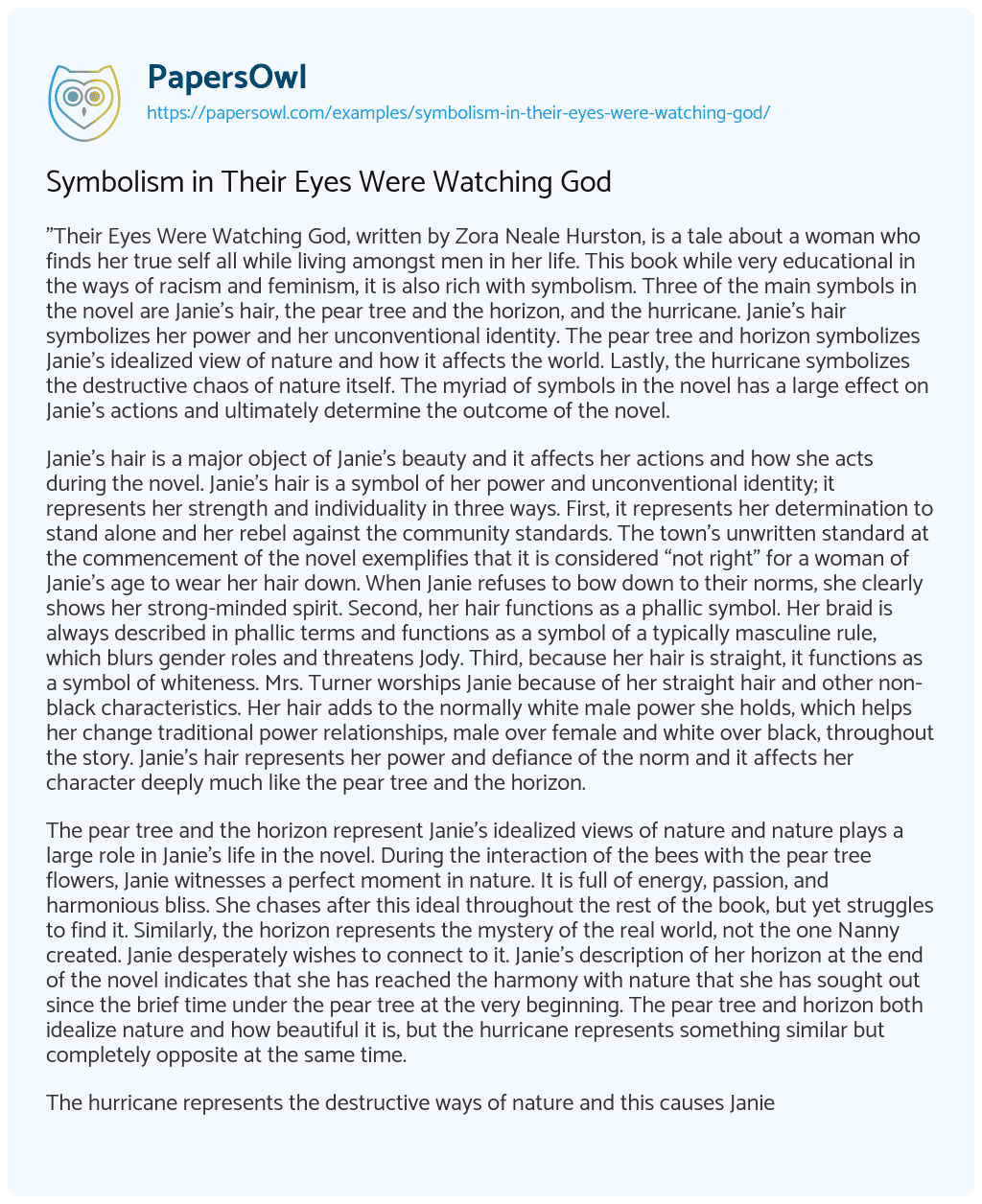 “Their Eyes Were Watching God, written by Zora Neale Hurston, is a tale about a woman who finds her true self all while living amongst men in her life. This book while very educational in the ways of racism and feminism, it is also rich with symbolism. Three of the main symbols in the novel are Janie’s hair, the pear tree and the horizon, and the hurricane. Janie’s hair symbolizes her power and her unconventional identity. The pear tree and horizon symbolizes Janie’s idealized view of nature and how it affects the world. Lastly, the hurricane symbolizes the destructive chaos of nature itself. The myriad of symbols in the novel has a large effect on Janie’s actions and ultimately determine the outcome of the novel.

Janie’s hair is a major object of Janie’s beauty and it affects her actions and how she acts during the novel. Janie’s hair is a symbol of her power and unconventional identity; it represents her strength and individuality in three ways. First, it represents her determination to stand alone and her rebel against the community standards. The town’s unwritten standard at the commencement of the novel exemplifies that it is considered “not right” for a woman of Janie’s age to wear her hair down. When Janie refuses to bow down to their norms, she clearly shows her strong-minded spirit. Second, her hair functions as a phallic symbol. Her braid is always described in phallic terms and functions as a symbol of a typically masculine rule, which blurs gender roles and threatens Jody. Third, because her hair is straight, it functions as a symbol of whiteness. Mrs. Turner worships Janie because of her straight hair and other non-black characteristics. Her hair adds to the normally white male power she holds, which helps her change traditional power relationships, male over female and white over black, throughout the story. Janie’s hair represents her power and defiance of the norm and it affects her character deeply much like the pear tree and the horizon.

The pear tree and the horizon represent Janie’s idealized views of nature and nature plays a large role in Janie’s life in the novel. During the interaction of the bees with the pear tree flowers, Janie witnesses a perfect moment in nature. It is full of energy, passion, and harmonious bliss. She chases after this ideal throughout the rest of the book, but yet struggles to find it. Similarly, the horizon represents the mystery of the real world, not the one Nanny created. Janie desperately wishes to connect to it. Janie’s description of her horizon at the end of the novel indicates that she has reached the harmony with nature that she has sought out since the brief time under the pear tree at the very beginning. The pear tree and horizon both idealize nature and how beautiful it is, but the hurricane represents something similar but completely opposite at the same time.

The hurricane represents the destructive ways of nature and this causes Janie to question her actions altogether. For example, it functions as the opposite of the pear tree and horizon imagery. The pear tree and horizon stand for beauty and pleasure, the hurricane demonstrates how chaotic the world can be. The hurricane makes each character question who they are and what their place in the universe is. Its impersonal nature makes the characters wonder what sort of world they live in. They question whether God cares about them at all and whether they are in conflict with the world around them. When facing the hurricane, Janie and the other characters ponder how they can possibly survive in a world filled with such pain.

The bunch of images in the novel largely affect Janie’s activities and eventually decide the result of the novel. Janie’s hair is a noteworthy object of Janie’s magnificence and it influences her activities and how she acts amid the novel. The pear tree and the skyline speak to Janie’s glorified perspectives on nature and nature assumes an extensive job in Janie’s life in the novel. The storm speaks to the ruinous methods for nature and this causes Janie to scrutinize her activities through and through.”

Symbolism in Their Eyes Were Watching God. (2021, Apr 03). Retrieved from https://papersowl.com/examples/symbolism-in-their-eyes-were-watching-god/

Nature’s Role in their Eyes were Watching God

Their Eyes were Watching God Essay about Power