Story of the Adventures of Odysseus 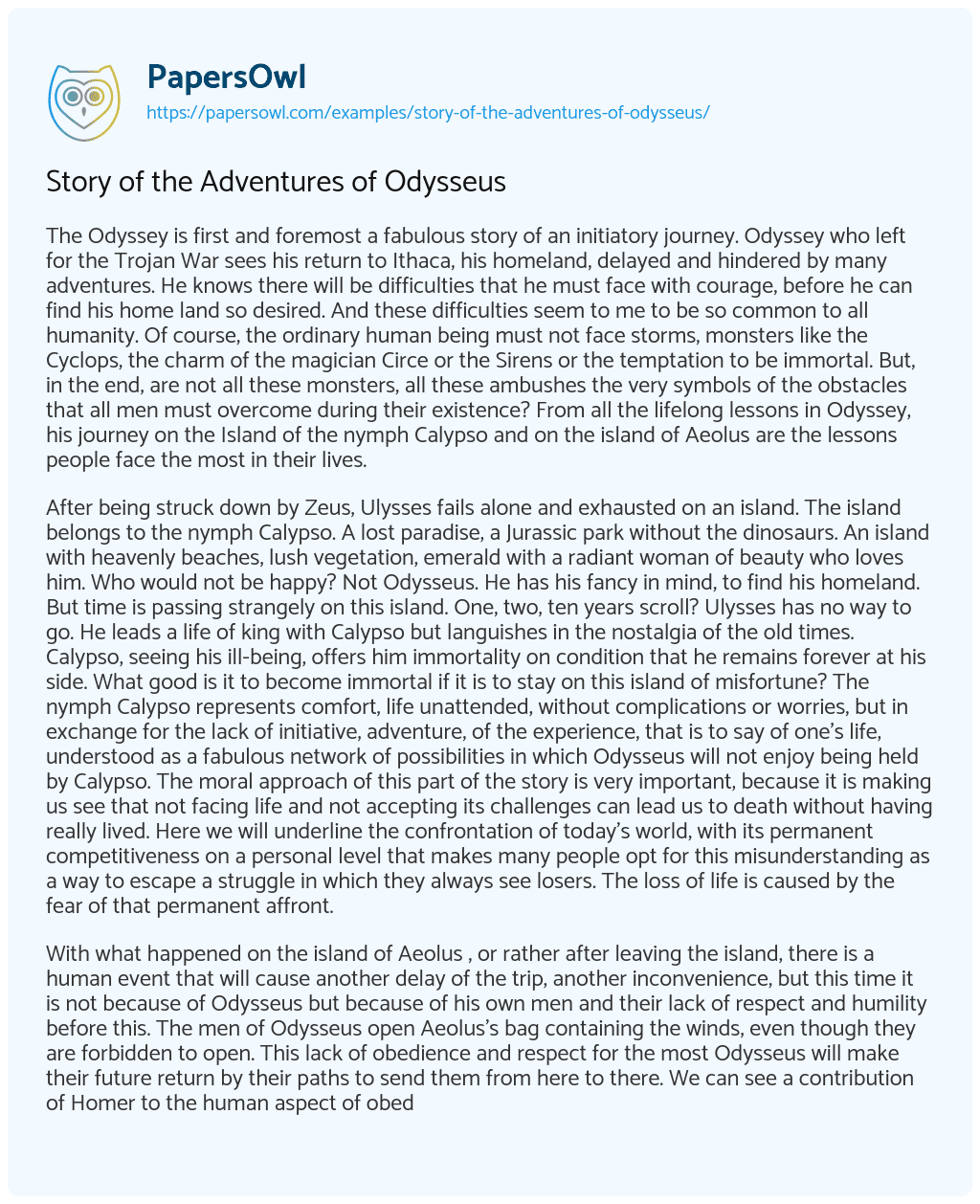 The Odyssey is first and foremost a fabulous story of an initiatory journey. Odyssey who left for the Trojan War sees his return to Ithaca, his homeland, delayed and hindered by many adventures. He knows there will be difficulties that he must face with courage, before he can find his home land so desired. And these difficulties seem to me to be so common to all humanity. Of course, the ordinary human being must not face storms, monsters like the Cyclops, the charm of the magician Circe or the Sirens or the temptation to be immortal. But, in the end, are not all these monsters, all these ambushes the very symbols of the obstacles that all men must overcome during their existence? From all the lifelong lessons in Odyssey, his journey on the Island of the nymph Calypso and on the island of Aeolus are the lessons people face the most in their lives.

After being struck down by Zeus, Ulysses fails alone and exhausted on an island. The island belongs to the nymph Calypso. A lost paradise, a Jurassic park without the dinosaurs. An island with heavenly beaches, lush vegetation, emerald with a radiant woman of beauty who loves him. Who would not be happy? Not Odysseus. He has his fancy in mind, to find his homeland. But time is passing strangely on this island. One, two, ten years scroll? Ulysses has no way to go. He leads a life of king with Calypso but languishes in the nostalgia of the old times. Calypso, seeing his ill-being, offers him immortality on condition that he remains forever at his side. What good is it to become immortal if it is to stay on this island of misfortune? The nymph Calypso represents comfort, life unattended, without complications or worries, but in exchange for the lack of initiative, adventure, of the experience, that is to say of one’s life, understood as a fabulous network of possibilities in which Odysseus will not enjoy being held by Calypso. The moral approach of this part of the story is very important, because it is making us see that not facing life and not accepting its challenges can lead us to death without having really lived. Here we will underline the confrontation of today’s world, with its permanent competitiveness on a personal level that makes many people opt for this misunderstanding as a way to escape a struggle in which they always see losers. The loss of life is caused by the fear of that permanent affront.

With what happened on the island of Aeolus , or rather after leaving the island, there is a human event that will cause another delay of the trip, another inconvenience, but this time it is not because of Odysseus but because of his own men and their lack of respect and humility before this. The men of Odysseus open Aeolus’s bag containing the winds, even though they are forbidden to open. This lack of obedience and respect for the most Odysseus will make their future return by their paths to send them from here to there. We can see a contribution of Homer to the human aspect of obedience as essential for the achievement of objectives. If everyone follows their own rules, if everyone does not respect the hero’s leadership, if everyone does not follow accepted social coexistence norms, the result will always be general lack of control and anarchy. This is not incompatible with individual progression and internal development, since it only affects the moments when, by collective decision, someone must “take charge” of a problem in order to reach a solution.

These difficulties are inherent in human life. It is necessary, without stopping, to progress, to overcome hardships and without doubt, the story of the adventures of Odysseus, is also the story of all human life. Happiness lies in having surpassed all these obstacles. The only real life is what we have, to live our life with fullness, every moment, every second, to realize that without the risk of losing we cannot love, because life is wonderful.

Story of the Adventures of Odysseus. (2021, Mar 18). Retrieved from https://papersowl.com/examples/story-of-the-adventures-of-odysseus/

The Story of Odysseus Moral Lessons

Odysseus Blames on Everyone in “The Odyssey”