Odysseus Blames on Everyone in “The Odyssey” 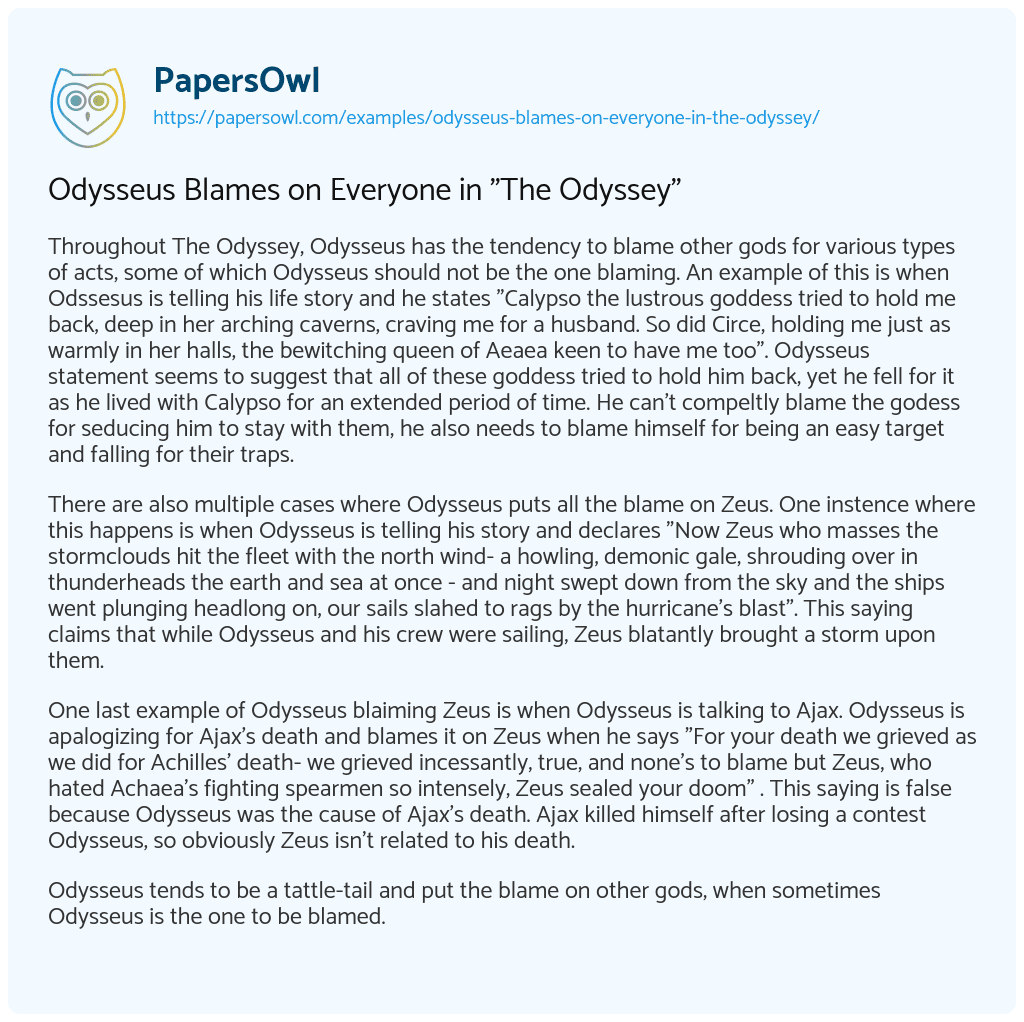 Throughout The Odyssey, Odysseus has the tendency to blame other gods for various types of acts, some of which Odysseus should not be the one blaming. An example of this is when Odssesus is telling his life story and he states “Calypso the lustrous goddess tried to hold me back, deep in her arching caverns, craving me for a husband. So did Circe, holding me just as warmly in her halls, the bewitching queen of Aeaea keen to have me too”. Odysseus statement seems to suggest that all of these goddess tried to hold him back, yet he fell for it as he lived with Calypso for an extended period of time. He can’t compeltly blame the godess for seducing him to stay with them, he also needs to blame himself for being an easy target and falling for their traps.

There are also multiple cases where Odysseus puts all the blame on Zeus. One instence where this happens is when Odysseus is telling his story and declares “Now Zeus who masses the stormclouds hit the fleet with the north wind- a howling, demonic gale, shrouding over in thunderheads the earth and sea at once – and night swept down from the sky and the ships went plunging headlong on, our sails slahed to rags by the hurricane’s blast”. This saying claims that while Odysseus and his crew were sailing, Zeus blatantly brought a storm upon them.

One last example of Odysseus blaiming Zeus is when Odysseus is talking to Ajax. Odysseus is apalogizing for Ajax’s death and blames it on Zeus when he says “For your death we grieved as we did for Achilles’ death- we grieved incessantly, true, and none’s to blame but Zeus, who hated Achaea’s fighting spearmen so intensely, Zeus sealed your doom” . This saying is false because Odysseus was the cause of Ajax’s death. Ajax killed himself after losing a contest Odysseus, so obviously Zeus isn’t related to his death.

Odysseus tends to be a tattle-tail and put the blame on other gods, when sometimes Odysseus is the one to be blamed.

Odysseus Blames on Everyone in "The Odyssey". (2020, Dec 15). Retrieved from https://papersowl.com/examples/odysseus-blames-on-everyone-in-the-odyssey/

Odysseus’ Journey in Homer’s the Odyssey

Odysseus as a Hero in ‘The Odyssey’