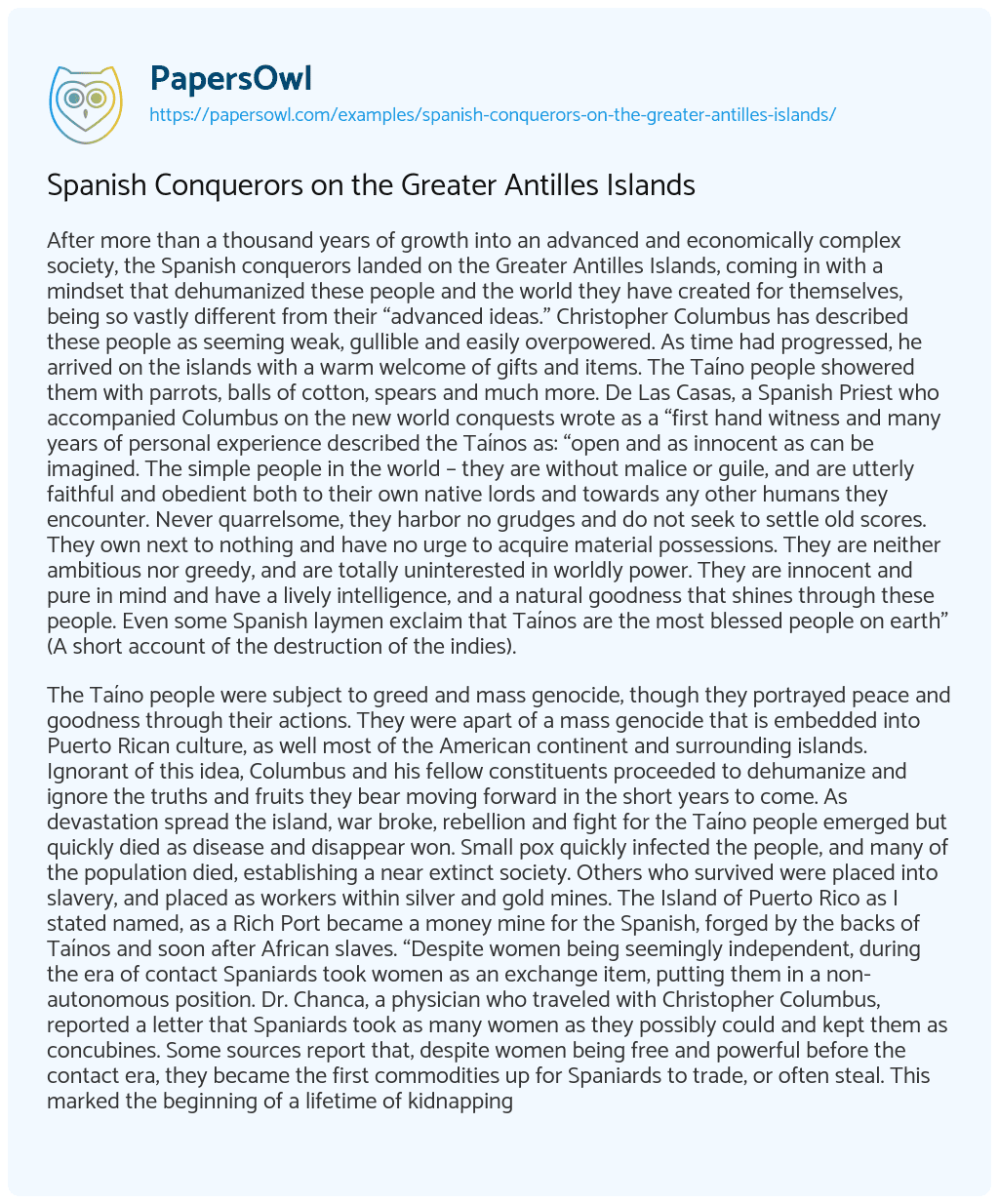 After more than a thousand years of growth into an advanced and economically complex society, the Spanish conquerors landed on the Greater Antilles Islands, coming in with a mindset that dehumanized these people and the world they have created for themselves, being so vastly different from their “advanced ideas.” Christopher Columbus has described these people as seeming weak, gullible and easily overpowered. As time had progressed, he arrived on the islands with a warm welcome of gifts and items. The Taíno people showered them with parrots, balls of cotton, spears and much more. De Las Casas, a Spanish Priest who accompanied Columbus on the new world conquests wrote as a “first hand witness and many years of personal experience described the Taínos as: “open and as innocent as can be imagined. The simple people in the world – they are without malice or guile, and are utterly faithful and obedient both to their own native lords and towards any other humans they encounter. Never quarrelsome, they harbor no grudges and do not seek to settle old scores. They own next to nothing and have no urge to acquire material possessions. They are neither ambitious nor greedy, and are totally uninterested in worldly power. They are innocent and pure in mind and have a lively intelligence, and a natural goodness that shines through these people. Even some Spanish laymen exclaim that Taínos are the most blessed people on earth” (A short account of the destruction of the indies).

The Taíno people were subject to greed and mass genocide, though they portrayed peace and goodness through their actions. They were apart of a mass genocide that is embedded into Puerto Rican culture, as well most of the American continent and surrounding islands. Ignorant of this idea, Columbus and his fellow constituents proceeded to dehumanize and ignore the truths and fruits they bear moving forward in the short years to come. As devastation spread the island, war broke, rebellion and fight for the Taíno people emerged but quickly died as disease and disappear won. Small pox quickly infected the people, and many of the population died, establishing a near extinct society. Others who survived were placed into slavery, and placed as workers within silver and gold mines. The Island of Puerto Rico as I stated named, as a Rich Port became a money mine for the Spanish, forged by the backs of Taínos and soon after African slaves. “Despite women being seemingly independent, during the era of contact Spaniards took women as an exchange item, putting them in a non-autonomous position. Dr. Chanca, a physician who traveled with Christopher Columbus, reported a letter that Spaniards took as many women as they possibly could and kept them as concubines. Some sources report that, despite women being free and powerful before the contact era, they became the first commodities up for Spaniards to trade, or often steal. This marked the beginning of a lifetime of kidnapping and abuse of Tíano women” (Citation Wiki).

Many of the proud Puerto Rican landmarks and cultural foundations were made on the backs of those who suffered devastation. Soon after, settlement started and the infestations of the islands resources were pushed to its limits. The Spanish began to produce cash crops including “sugar cane, ginger, tobacco and coffee” (CITATION HISTORY). Through years of Columbus’ dismay and failure, his attempt to successfully colonize the islands in the Antilles was sadly unproductive. Rebellion after rebellion, the Taíno people tried to fight against this immoral and indescribable tyranny. Followed in 1508, Juan Ponce De Leon replaced Columbus as his “bank,” the King and Queen was losing money. The immoral implications were not factors, only that this operation was no longer benefiting them fiscally. At this time, the current day Puerto Rico was being created and formed. The influx of African slaves, Chinese, Cubans, and South Americans has formed the infamous mix of people we see today. There is a drastic change within every aspect of the society, including culturally, politically and economically. A more chronological look at the events that led up to this current state of Puerto Rico started in 1514, King Ferdinand had given more authority to mix and marry legally with the women of Puerto Rico. In 1522 San Juan became a landmark city that held the center of all that followed in Puerto Rican history. One of the firsts was the San Juan Church, which still stands to this day. At this time, the Catholic/Christian cultured emerged creating the basis for most religious practices and holidays. The adaptation of Catholicism helped mold every aspect of the society.

In 1539, the construction of El Castillo de San Felipe del Morro started, which was a pivotal fort used by the Spanish. This landmark known to most current Puerto Ricans as a representation of beauty and power was built by the conquerors that had infested the island with greed and malicious desire. By around 1600 most of the Taínos were killed, or died due to diseases and poor work conditions. In the next years coming Puerto Rico became a melting pot of races and cultures more but still more reflective of the Spanish culture.

In 1868, the people of Puerto Rico have once again tried to revolt from the tyranny before them. Manuel Rojas organized a revolutionary movement in the town of Lares. He declares Puerto Rico a republic, being a voice for many crying for help. This was quickly dissmissed by the Spanish military which ended Rojas’ future intents. This day will forever be known as the Grito (shout) de Lares. In 1873, the Spanish followed by abolishing slavery, and giving somewhat of freedom to the mixed community.

The Taino VS Columbus