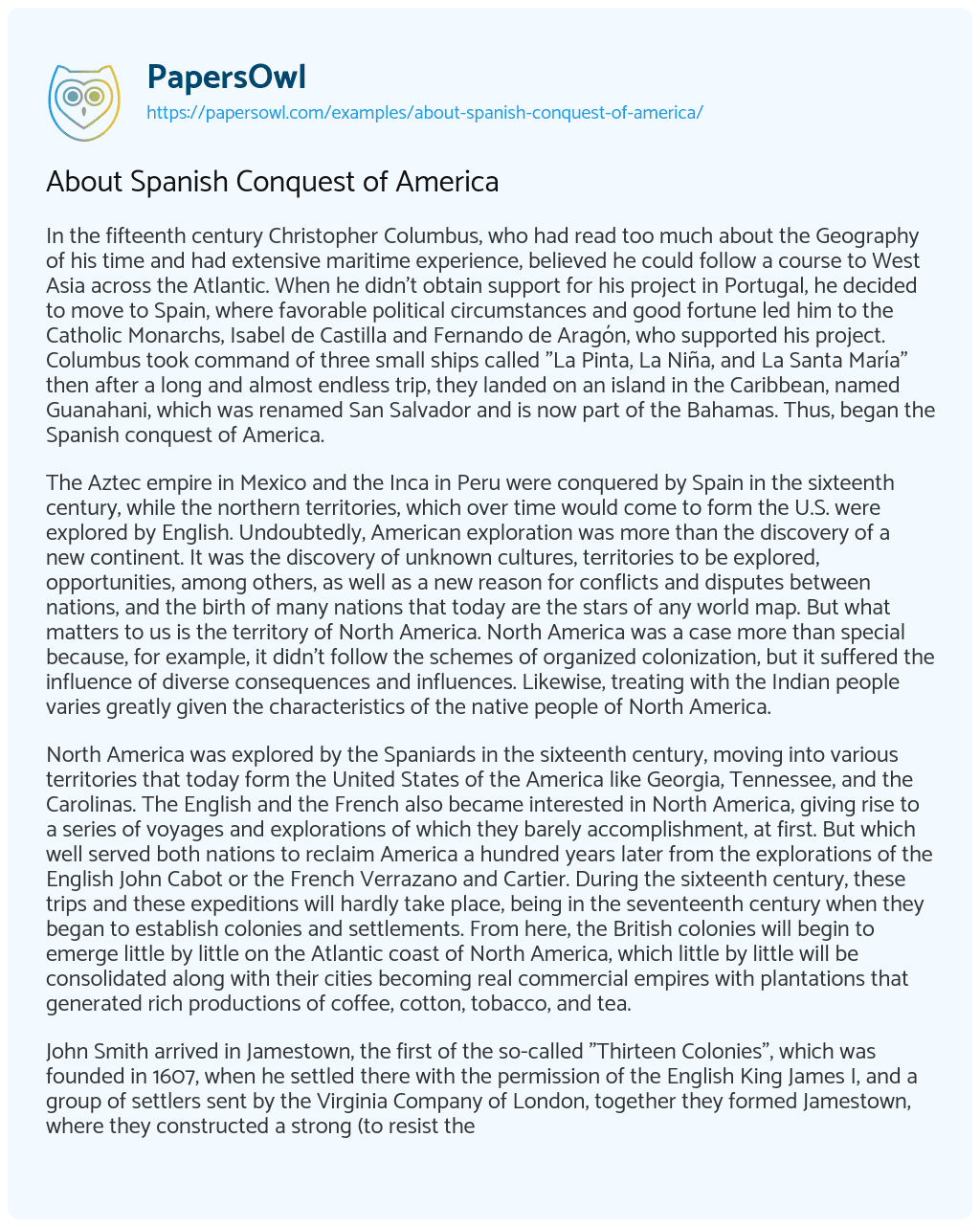 In the fifteenth century Christopher Columbus, who had read too much about the Geography of his time and had extensive maritime experience, believed he could follow a course to West Asia across the Atlantic. When he didn’t obtain support for his project in Portugal, he decided to move to Spain, where favorable political circumstances and good fortune led him to the Catholic Monarchs, Isabel de Castilla and Fernando de Aragón, who supported his project. Columbus took command of three small ships called “La Pinta, La Niña, and La Santa María” then after a long and almost endless trip, they landed on an island in the Caribbean, named Guanahani, which was renamed San Salvador and is now part of the Bahamas. Thus, began the Spanish conquest of America.

The Aztec empire in Mexico and the Inca in Peru were conquered by Spain in the sixteenth century, while the northern territories, which over time would come to form the U.S. were explored by English. Undoubtedly, American exploration was more than the discovery of a new continent. It was the discovery of unknown cultures, territories to be explored, opportunities, among others, as well as a new reason for conflicts and disputes between nations, and the birth of many nations that today are the stars of any world map. But what matters to us is the territory of North America. North America was a case more than special because, for example, it didn’t follow the schemes of organized colonization, but it suffered the influence of diverse consequences and influences. Likewise, treating with the Indian people varies greatly given the characteristics of the native people of North America.

North America was explored by the Spaniards in the sixteenth century, moving into various territories that today form the United States of the America like Georgia, Tennessee, and the Carolinas. The English and the French also became interested in North America, giving rise to a series of voyages and explorations of which they barely accomplishment, at first. But which well served both nations to reclaim America a hundred years later from the explorations of the English John Cabot or the French Verrazano and Cartier. During the sixteenth century, these trips and these expeditions will hardly take place, being in the seventeenth century when they began to establish colonies and settlements. From here, the British colonies will begin to emerge little by little on the Atlantic coast of North America, which little by little will be consolidated along with their cities becoming real commercial empires with plantations that generated rich productions of coffee, cotton, tobacco, and tea.

John Smith arrived in Jamestown, the first of the so-called “Thirteen Colonies”, which was founded in 1607, when he settled there with the permission of the English King James I, and a group of settlers sent by the Virginia Company of London, together they formed Jamestown, where they constructed a strong (to resist the attacks of the natives). After years of harsh conditions, they managed to make prosper the settlement and the surrounding lands, being towards the decade of the 20 an important exporter of tobacco toward the English metropolis. Among the social groups that were in Jamestown, there were not only settlers from comfortable social groups looking for new opportunities, there were also homeless children used in Tobacco collection and prostitutes.

The success of Virginia became stronger with the meeting of the first assembly of planters of Virginia on July 30, 1619. Which was the first representative government of the colony, which became a royal colony when the Virginia Company was dissolved in 1624, during this initiative expansion in front of France, the king Carlos I granted privileges and lands for the settlement in the North American territories, from these initiatives emerge, for example, the colony of Baltimore, which owes its name to Cecil Calvert, first Lord of Baltimore, who established their plantations there, causing them to expand and end up shaping the colony.

The other movement of great importance in the establishment of the colonies was driven by the religious factor: English Puritanism, which away from English Catholicism, and Anglicism, considered stained by the first (that’s why they are known as Puritans), marched on the ship Mayflower, arriving in what will be Massachusetts and founding the settlement of Plymouth, where they would live with the Puritan rules agreed during the trip (“Mayflower Compact”). The “Pilgrim Fathers,” which is how the members of this expedition are known, wanted to get to Jamestown, Virginia and by mistake, they settled in Massachusetts, where they would spend a hard first year due to weather and hunger. From this point, more settlements were founded, like Boston (1630), within same Massachusetts. But they also expanded along the coast, founding new colonies in the region known as New England, which along with other people and other factors could expand: Connecticut (1635), Maryland (1634), Rhode Island (1635), Pennsylvania (1681).

However, the success of Virginia, attracted the attention of the Europeans who also settled in North America, establishing colonies that later would pass to the British control. Some cases are Delaware, founded by Swedish settlers, and the case of New Amsterdam, a Dutch colony founded in 1626 when they bought the Manhattan Island to the natives, then, the English took the control and renamed it New York in 1664.

Despite the slowdown of the English Civil War (1642-1660), the subsequent stability again drove the colonization process and by 1733 the English had already occupied and developed their “Thirteen Colonies”: New Hampshire, Massachusetts, Rhode Island, Connecticut, New York, New Jersey, Pennsylvania, Delaware, Maryland, Virginia, North Carolina, South Carolina, and Georgia. The North American colonies evolved in the approximately two centuries that separate the first explorations and the first colonies from the beginning of the American Revolution. This development is reflected in that by 1770, the Thirteen Colonies already had developed cities and that they reflected the commercial power of the colony.

About Spanish Conquest of America. (2021, Apr 03). Retrieved from https://papersowl.com/examples/about-spanish-conquest-of-america/