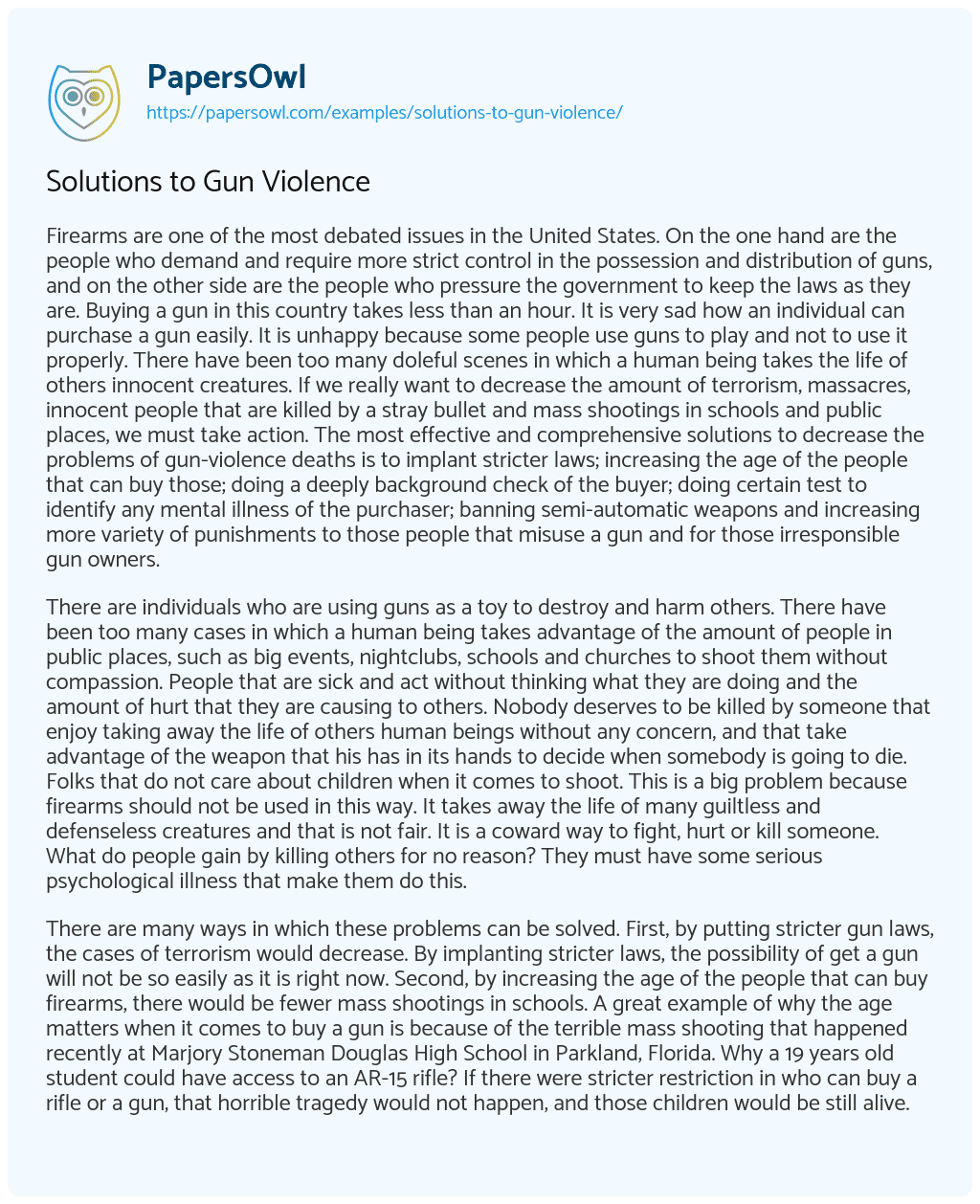 Firearms are one of the most debated issues in the United States. On the one hand are the people who demand and require more strict control in the possession and distribution of guns, and on the other side are the people who pressure the government to keep the laws as they are. Buying a gun in this country takes less than an hour. It is very sad how an individual can purchase a gun easily. It is unhappy because some people use guns to play and not to use it properly. There have been too many doleful scenes in which a human being takes the life of others innocent creatures. If we really want to decrease the amount of terrorism, massacres, innocent people that are killed by a stray bullet and mass shootings in schools and public places, we must take action. The most effective and comprehensive solutions to decrease the problems of gun-violence deaths is to implant stricter laws; increasing the age of the people that can buy those; doing a deeply background check of the buyer; doing certain test to identify any mental illness of the purchaser; banning semi-automatic weapons and increasing more variety of punishments to those people that misuse a gun and for those irresponsible gun owners.

There are individuals who are using guns as a toy to destroy and harm others. There have been too many cases in which a human being takes advantage of the amount of people in public places, such as big events, nightclubs, schools and churches to shoot them without compassion. People that are sick and act without thinking what they are doing and the amount of hurt that they are causing to others. Nobody deserves to be killed by someone that enjoy taking away the life of others human beings without any concern, and that take advantage of the weapon that his has in its hands to decide when somebody is going to die. Folks that do not care about children when it comes to shoot. This is a big problem because firearms should not be used in this way. It takes away the life of many guiltless and defenseless creatures and that is not fair. It is a coward way to fight, hurt or kill someone. What do people gain by killing others for no reason? They must have some serious psychological illness that make them do this.

There are many ways in which these problems can be solved. First, by putting stricter gun laws, the cases of terrorism would decrease. By implanting stricter laws, the possibility of get a gun will not be so easily as it is right now. Second, by increasing the age of the people that can buy firearms, there would be fewer mass shootings in schools. A great example of why the age matters when it comes to buy a gun is because of the terrible mass shooting that happened recently at Marjory Stoneman Douglas High School in Parkland, Florida. Why a 19 years old student could have access to an AR-15 rifle? If there were stricter restriction in who can buy a rifle or a gun, that horrible tragedy would not happen, and those children would be still alive.

As Educators Morris, Charles A, MD, MPH; Miller, Jonathan B, JD. wrote, “As parents of school-age children ourselves, we can imagine, with horror, saying goodbye to our children on a nondescript school day and later realizing that those were the last words we got to say to them (Mar 22, 2018).” It is hard and sad to just think about it. Schools should have machines that detect any kind of weapons, like metal detectors, and infiltrate police to react quickly if something happen. Third, by reviewing deeply the background and the behavior of the purchaser, there would be less possibility that a criminal, or an individual with serious mental illness could have access to a rifle or a gun and misuse it.

Finally, not only doing background checks and analyzing the behavior of the buyer, but also have various penalty to punish these individuals when they make a crime using firearms as well as punishments for those irresponsible gun owners, for example, parents that do not have their gun locked and it is in a place where their children can have access to it and kill others. There are people that think they can play with these kinds of weapons as if it were a toy. People that are looking forward to hurting and destroy others human being. Folks that enjoy killing and that do not care about the life of others. So, these solutions are the best to prevent misfortunes and to minimize the cases of massacres, terrorism, suicides and the gun-violence deaths.

Researcher suggests that there are many effective solutions to solve these problems. According to the Director and Associate Professor of Bioethics, Sean Philpott-Jones, “…the solution is to enforce already existent laws that are designed to keep ?rearms away from individuals with certain types or degrees of mental ill-ness. This would include expanding the authority of law enforcement of?cers to detain those suspected of having a mental illness (Philpott?Jones, 2018).” Gun-violence is an issue that needs immediately attention. The solutions are already suggested, now it is time to act and to prevent unnecessary tragedies. As educator Sean Philpott-Jones emphasizes, “…the solution to mass shootings also needs to consider strategies that may reduce gun-violence in general. These include a variety of measures that many criminologists, lawyers, and public health experts believe are effective, including universal background checks; additional restrictions on the sale of ?rearms to violent criminals, known or suspected terrorists, and those with serious mental illnesses; and bans on military-style assault weapons, semi-automatic guns, and high-capacity am-munition magazines (Philpott?Jones, 2018).” If these solutions are implanted, it would not exist the possibility of gun-violence deaths. Students would not have to be worried about a possible school shooting and they would feel safer. People would not have to be afraid to get shot in big events or in churches.

The benefits of these solutions (shown above) are that it brings many positive results. First, the citizens of this country would enjoy any big event, nightclubs, churches, schools and more, without the fear of getting shot or killed. Second, students at school would not feel afraid of a possible mass shooting. Third, the massacres, terrorism and bad use of firearms would disappear. Finally, there would be people with serious mental illness in the right place and not trying to hurt, or destroy others, because life is not a game. And there would not be more deaths because of gun-violence, so the death by a gunshot would be minimized.

Some people argue that the laws “should be less strict” or that it has to “remain as it is”. However, it has to be stricter actually, because the fact that everybody can get a gun easily in this country is the cause of too many innocent deaths. The Congress is one of the principals responsible of putting these solutions to work in order to resolve the issues. As educator Edward W. Campion highlights, “For years under both Republican and Democratic administrations, Congress has been afraid to do anything about regulating guns, even those that are designed for mass shootings. What will it take to get some legislative action? A shooting of 1000? 5000? Such mega-horror scenes are now clearly feasible (W. Campion, 2017).” Professor Campion is totally right. What can be done to pay attention to one of the most important issues in the United States? This issue needs to be solved, and clearly one of the solutions is not putting gun laws less strict. In order to decrease the amount of tragedies that happen in this country because gun-violence, the laws should be stricter.

The comprehensive solutions to the problems of gun-violence deaths are stricter laws, changing the age in which an individual can own a gun; doing background checks to the buyers; doing psychological test to these costumers before buying a gun; and banning semi-automatic and assault weapons, and increasing the punishments to those people that misuse a firearm and for those irresponsible gun owners. These solutions are the best to reduce the amount of innocent deaths by a gun shot. The goal of these solutions is to prevent innocent deaths and to pay attention to those people with serious mental illness and do something about it. By putting in work each of these solutions, misfortune tragedies would be minimalized in this country and the issue of gun-violence would disappear.

What is Gun Violence

The Problem of the Gun Violence