Social Media is not for Children 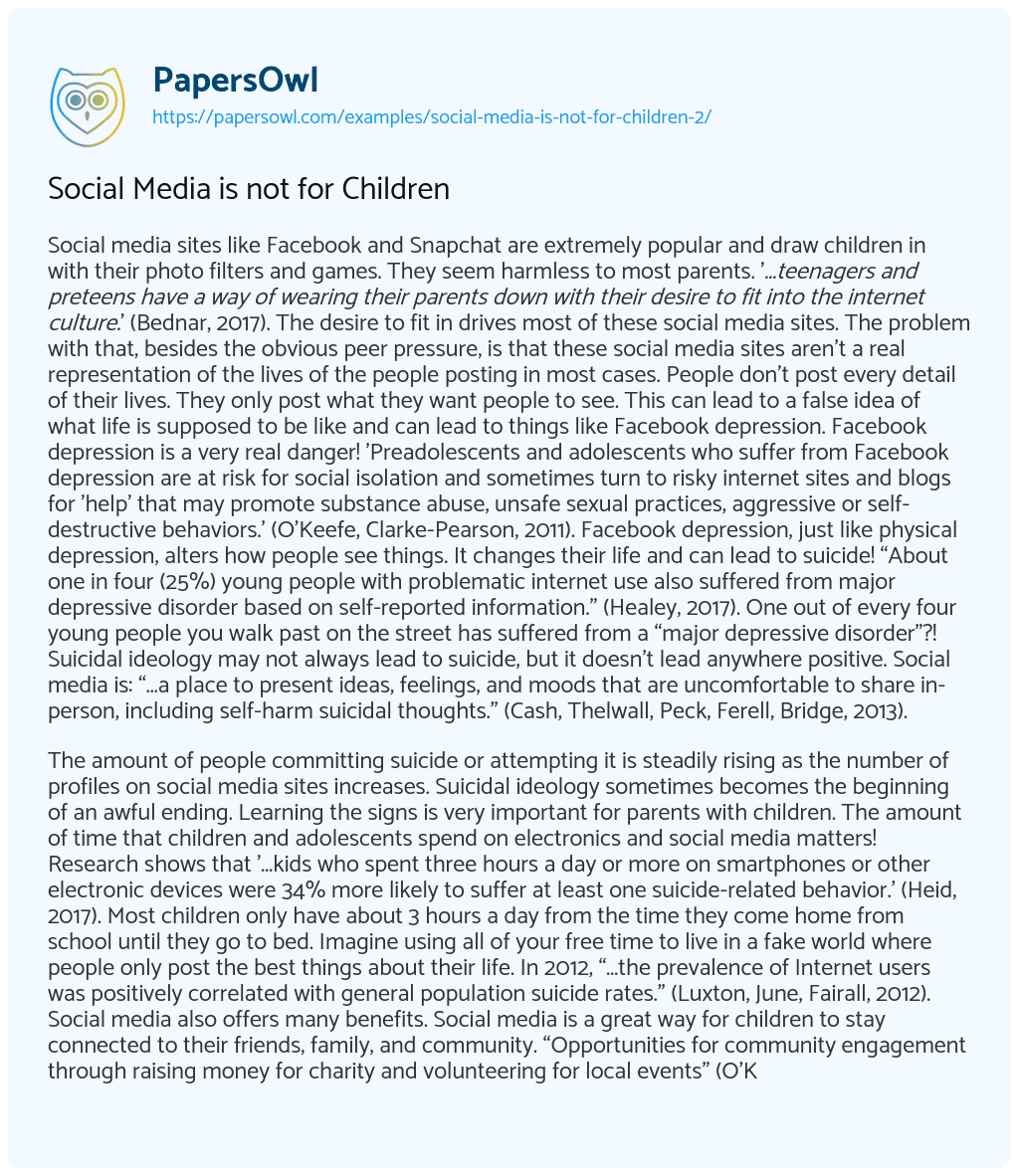 Social media sites like Facebook and Snapchat are extremely popular and draw children in with their photo filters and games. They seem harmless to most parents. ‘…teenagers and preteens have a way of wearing their parents down with their desire to fit into the internet culture.‘ (Bednar, 2017). The desire to fit in drives most of these social media sites. The problem with that, besides the obvious peer pressure, is that these social media sites aren’t a real representation of the lives of the people posting in most cases. People don’t post every detail of their lives. They only post what they want people to see. This can lead to a false idea of what life is supposed to be like and can lead to things like Facebook depression. Facebook depression is a very real danger! ‘Preadolescents and adolescents who suffer from Facebook depression are at risk for social isolation and sometimes turn to risky internet sites and blogs for ‘help’ that may promote substance abuse, unsafe sexual practices, aggressive or self-destructive behaviors.’ (O’Keefe, Clarke-Pearson, 2011). Facebook depression, just like physical depression, alters how people see things. It changes their life and can lead to suicide! “About one in four (25%) young people with problematic internet use also suffered from major depressive disorder based on self-reported information.” (Healey, 2017). One out of every four young people you walk past on the street has suffered from a “major depressive disorder”?! Suicidal ideology may not always lead to suicide, but it doesn’t lead anywhere positive. Social media is: “…a place to present ideas, feelings, and moods that are uncomfortable to share in-person, including self-harm suicidal thoughts.” (Cash, Thelwall, Peck, Ferell, Bridge, 2013).

The amount of people committing suicide or attempting it is steadily rising as the number of profiles on social media sites increases. Suicidal ideology sometimes becomes the beginning of an awful ending. Learning the signs is very important for parents with children. The amount of time that children and adolescents spend on electronics and social media matters! Research shows that ‘…kids who spent three hours a day or more on smartphones or other electronic devices were 34% more likely to suffer at least one suicide-related behavior.’ (Heid, 2017). Most children only have about 3 hours a day from the time they come home from school until they go to bed. Imagine using all of your free time to live in a fake world where people only post the best things about their life. In 2012, “…the prevalence of Internet users was positively correlated with general population suicide rates.” (Luxton, June, Fairall, 2012). Social media also offers many benefits. Social media is a great way for children to stay connected to their friends, family, and community. “Opportunities for community engagement through raising money for charity and volunteering for local events” (O’Keefe, Clarke-Pearson, 2011).

The Ice Bucket Challenge is an example of an outreach that many children joined. It gave all people a chance to feel like they were contributing to an important issue. Social media allows children to get involved in real-world issues. Bednar stated, “…large social networks expose kids to important issues and people from all over the world.” (Bednar, 2017). It is so easy to find friends on Facebook and other social media sites. There are no requirements. It’s a place to meet people from every walk of life and every situation. There are opportunities to learn about more news, faster. Social media also allows users to have access to health information and research on other topics they are afraid to talk to their parents about. “Adolescents are finding that they can access online information about their health concerns easily and anonymously.” (O’Keefe, Clarke-Pearson, 2011). In a situation where a child is afraid to talk to someone, social media sites offer the opportunity for adolescents, and all people, to find other people in similar situations, anonymously. It allows children to find out more information before panicking and sometimes can lead to free, cheap, or discounted help.

Social media can be dangerous for our children when introduced too soon. It’s against the law for them to sign up before they are 13. Parents and kids are lying about their age to sign them up which isn’t teaching them good habits. Social media puts kids in the middle of a face-less network that makes it easy for cyberbullying to occur. Cyberbullying and social media dangers can lead to depression and suicide. Though it has many benefits, do they outweigh the risks? Educate yourself as a parent! Don’t give in to the hype. Make your kids wait until they are ready.

Social Media is not for Children. (2022, May 04). Retrieved from https://papersowl.com/examples/social-media-is-not-for-children-2/

Social Media is not for Children