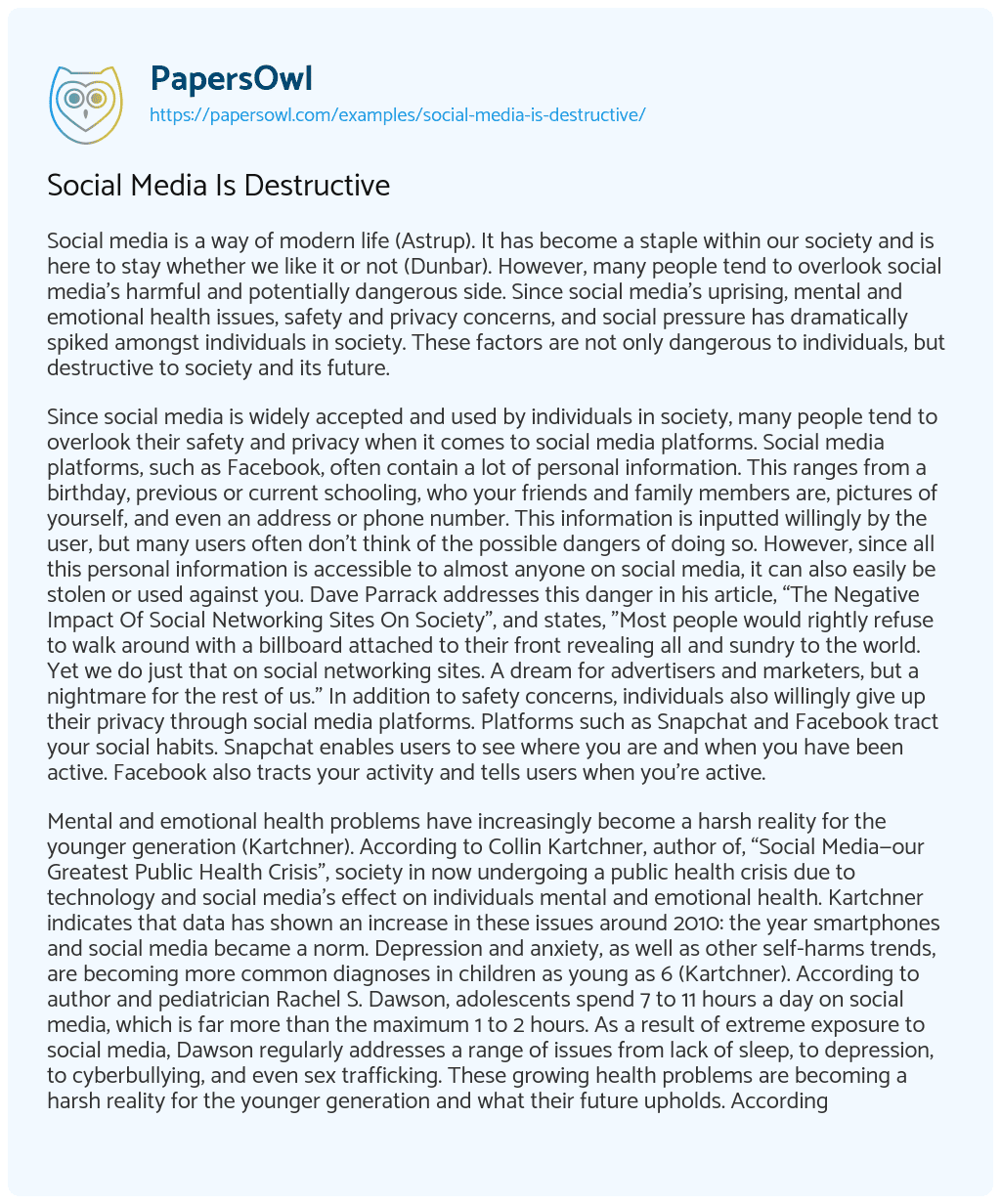 Social media is a way of modern life (Astrup). It has become a staple within our society and is here to stay whether we like it or not (Dunbar). However, many people tend to overlook social media’s harmful and potentially dangerous side. Since social media’s uprising, mental and emotional health issues, safety and privacy concerns, and social pressure has dramatically spiked amongst individuals in society. These factors are not only dangerous to individuals, but destructive to society and its future.

Since social media is widely accepted and used by individuals in society, many people tend to overlook their safety and privacy when it comes to social media platforms. Social media platforms, such as Facebook, often contain a lot of personal information. This ranges from a birthday, previous or current schooling, who your friends and family members are, pictures of yourself, and even an address or phone number. This information is inputted willingly by the user, but many users often don’t think of the possible dangers of doing so. However, since all this personal information is accessible to almost anyone on social media, it can also easily be stolen or used against you. Dave Parrack addresses this danger in his article, “The Negative Impact Of Social Networking Sites On Society”, and states, “Most people would rightly refuse to walk around with a billboard attached to their front revealing all and sundry to the world. Yet we do just that on social networking sites. A dream for advertisers and marketers, but a nightmare for the rest of us.” In addition to safety concerns, individuals also willingly give up their privacy through social media platforms. Platforms such as Snapchat and Facebook tract your social habits. Snapchat enables users to see where you are and when you have been active. Facebook also tracts your activity and tells users when you’re active.

Mental and emotional health problems have increasingly become a harsh reality for the younger generation (Kartchner). According to Collin Kartchner, author of, “Social Media—our Greatest Public Health Crisis”, society in now undergoing a public health crisis due to technology and social media’s effect on individuals mental and emotional health. Kartchner indicates that data has shown an increase in these issues around 2010: the year smartphones and social media became a norm. Depression and anxiety, as well as other self-harms trends, are becoming more common diagnoses in children as young as 6 (Kartchner). According to author and pediatrician Rachel S. Dawson, adolescents spend 7 to 11 hours a day on social media, which is far more than the maximum 1 to 2 hours. As a result of extreme exposure to social media, Dawson regularly addresses a range of issues from lack of sleep, to depression, to cyberbullying, and even sex trafficking. These growing health problems are becoming a harsh reality for the younger generation and what their future upholds. According to Andrea McDaniels, author of, “Does Use Of Social Media Affect Emotional Wellbeing Of Teens”, social media can be more or as addictive as cigarettes or alcohol.

The perceived expectations that social media and social media influencers generate on the younger generation has created a toxic culture (Zimmerman). The social pressure caused by social media is a serious problem for young children and teens who use social media platforms such as Instagram and Facebook. Young girls in particularly are easy, susceptible targets to social pressure. According to Collin Kartchner, young girls are experiencing more social pressure than ever before ultimately resulting in doctors prescribing more mood stabilizers than ever. Many social influencers post what is considered “ideal” or “likable”. Many young teens tend to compare themselves to these social influencers, either physically or by comparing lifestyles. By doing so, teens feel as if they can make themselves into the “perfect person” by holding up to society’s expectations. According to Alison Zimmerman, author of, “Social Media: The Enemy of Body Positivity”, individuals pressure themselves to “keep up”. However, individuals don’t consider the negative aspects. By trying to “keep up” to society’s expectations, individuals can ultimately develop mental health issues. Zimmerman states that increasing data has shown an increase in the number plastic surgeries and eating disorders that can be attributed to the use of social media. The data is not only alarming, but rapidly increasing as society changes its expectations over the decades. According to Asha Davis and Erin Burnett, the pressure to “keep up” comes from FOMO: the fear of missing out. Davis and Burnett state that when teenagers do not have access to social platforms, they develop FOMO, much like anxiety, because they feel disconnected from the social world. Today, almost every young teen has access to a social platform, but when they do not have access, the fear of missing out overcomes them. Davis and Burnett stress the importance of taking a break from social media. They stress that teens need to understand that social media produces unrealistic expectations. Zimmerman also stresses the importance of taking a break from social media as well. Zimmerman states that social media is the enemy of body positivity and is a way for individuals to measure their self-worth, but often don’t see that that social media has cognitively trapped them in a world that is unachievable.

In conclusion, social media has several negative aspects that society tends to overlook every single day. Individuals in society have not only given up their privacy and safety, but also a part of themselves and their lives to social media platforms. Social media has especially impacted the younger generation more than anything. The presence of developing mental and emotional health issues is not only alarming, but also concerning for what the younger generation’s future upholds. However, no matter what society does to try and positively reform social media platforms, there will always be negatives aspects that will affect another generation once again. Because no matter what society does, social media is here to stay.

What is not Social about Social Media: Life from Behind a Screen