Social Media and how it Boosts Activism 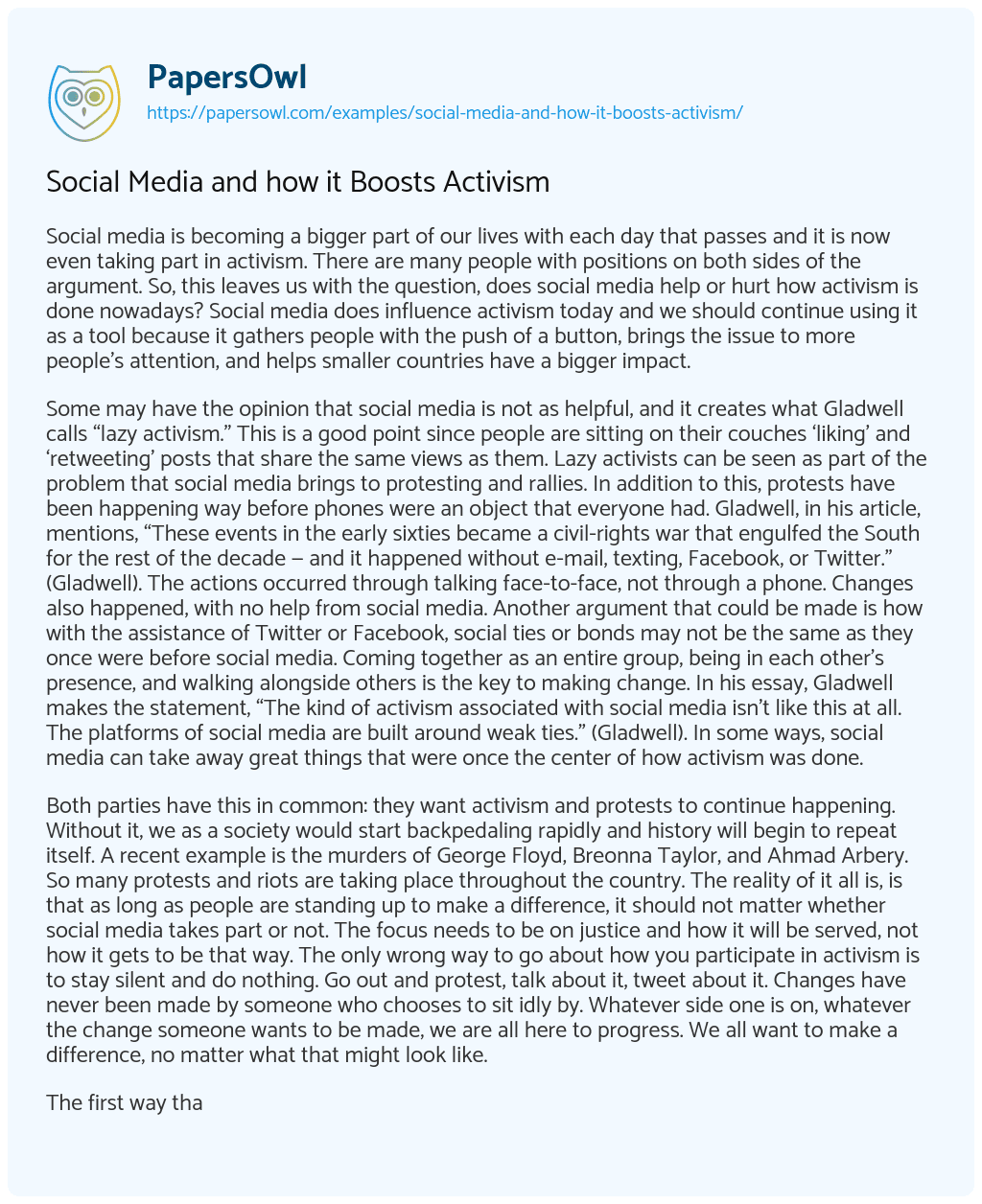 Social media is becoming a bigger part of our lives with each day that passes and it is now even taking part in activism. There are many people with positions on both sides of the argument. So, this leaves us with the question, does social media help or hurt how activism is done nowadays? Social media does influence activism today and we should continue using it as a tool because it gathers people with the push of a button, brings the issue to more people’s attention, and helps smaller countries have a bigger impact.

Some may have the opinion that social media is not as helpful, and it creates what Gladwell calls “lazy activism.” This is a good point since people are sitting on their couches ‘liking’ and ‘retweeting’ posts that share the same views as them. Lazy activists can be seen as part of the problem that social media brings to protesting and rallies. In addition to this, protests have been happening way before phones were an object that everyone had. Gladwell, in his article, mentions, “These events in the early sixties became a civil-rights war that engulfed the South for the rest of the decade — and it happened without e-mail, texting, Facebook, or Twitter.” (Gladwell). The actions occurred through talking face-to-face, not through a phone. Changes also happened, with no help from social media. Another argument that could be made is how with the assistance of Twitter or Facebook, social ties or bonds may not be the same as they once were before social media. Coming together as an entire group, being in each other’s presence, and walking alongside others is the key to making change. In his essay, Gladwell makes the statement, “The kind of activism associated with social media isn’t like this at all. The platforms of social media are built around weak ties.” (Gladwell). In some ways, social media can take away great things that were once the center of how activism was done.

Both parties have this in common: they want activism and protests to continue happening. Without it, we as a society would start backpedaling rapidly and history will begin to repeat itself. A recent example is the murders of George Floyd, Breonna Taylor, and Ahmad Arbery. So many protests and riots are taking place throughout the country. The reality of it all is, is that as long as people are standing up to make a difference, it should not matter whether social media takes part or not. The focus needs to be on justice and how it will be served, not how it gets to be that way. The only wrong way to go about how you participate in activism is to stay silent and do nothing. Go out and protest, talk about it, tweet about it. Changes have never been made by someone who chooses to sit idly by. Whatever side one is on, whatever the change someone wants to be made, we are all here to progress. We all want to make a difference, no matter what that might look like.

The first way that social media is impacting activism today is by easily having access to the place in which protests are held. It only takes a few seconds to type and posts a tweet telling people where the event will be held and what date and time it will be happening. Communication as easy as this is gathering more people faster than ever. Mirani in his essay brings up, “…which lies in their ability to rapidly spread information about alternative points of view that might otherwise never reach a large audience.” (Mirani). Smaller communities could use this kind of help because, without social media, it would be more difficult. If they used Twitter or Facebook, more might be inclined to take part in standing up for the changes they want to be made. Social media is a huge part of how we communicate because it is the quickest way to reach someone. It was smart to incorporate it into how we protest. Less effort has to be made to help make bigger changes. The faster we jump into action; the more efficient things will be, and more will get done.

Secondly, social media is influencing activism today by having the power to make everyone aware of what is going on in completely different countries. Outlets like Twitter have become a huge part of bringing us into the light of issues in countries that we haven’t thought much about. The article by Mirani, points out, “A more recent example is Kashmir, where this summer’s protests gained widespread media coverage both in India and internationally.” (Mirani). Protests, walk-outs, and rallies that are happening today wouldn’t have as much of an effect without the aid of social media. In smaller countries, it is crucial to get acknowledged by other countries, social media has helped with this. If issues are in countries where the government overpowers everything else, they need more people to be aware and participate in protests. Sure, they would still happen, but having these extra forms of communication only assists them that much more. Without them, not everyone who wants to take part in some kind of movement would be able to just because they weren’t aware it was even happening. Because of social media, women’s movements, LGBTQ+ movements, or Black Lives Matter movements, would not have had this many people in so many places across the country contribute to making change.

The last example of how social media is useful when it comes to activism is how it gives smaller countries a chance to be heard. Countries that aren’t as big as the United States, for example, don’t have the opportunities that democracy might. It is harder for some to find their voice, especially if the government doesn’t allow those things. Social media changes that for them and gives them the freedom to do so. In an article by Karamat, she explains, “The social media sites like YouTube, Facebook, Twitter, Myspace, and other social and political blogs are obtaining recognition, mostly by the youth of the Pakistan…” (Karamat). Now, countries like Pakistan have easy access to tools like Twitter they can more effectively get others’ attention. The chapter by Mirani also brings this up in his writing by saying, “’…making populations aware of what their governments are doing in their name, to influencing opinion across the world, then the revolution will be indeed be tweeted.’” (Mirani). When smaller countries have overpowering governments, there’s no room for organizing protests without social media. This is why if social media was not around, it wouldn’t be where they are now. In another article by Mahajan, she talks about #BlueforSudan and how the hashtag helped raise awareness in Sudan and the problems they were facing. The article states, “social media activism is a way of including the voices that cannot physically protest or are not spotlighted by global media.” (Mahajan). Sudan would not have gotten as much recognition around the globe if it wasn’t for social media, the hashtags, and the blue profile pictures. Countries like Sudan need this support so that they have the opportunity to fight for their freedoms. Without social media, the challenge would be much more difficult.

There is strong evidence for both sides of the argument of whether or not social media has affected activism negatively or positively. There are opposing views of social media being a part of protests like the beginning of the “lazy-activists” and how activism has been around forever, and it was not necessary to use phones or social media. But there are benefits to using social media in activism. Those being, faster communication and gatherings, more awareness of a specific issue, and how much it does for the countries that can’t go without it. Social media should continue to be a part of activism and how it is portrayed. The “lazy activists” can get in the way but there are more benefits that are crucial in playing the role of helping others.

Social Media and how it Boosts Activism. (2022, May 02). Retrieved from https://papersowl.com/examples/social-media-and-how-it-boosts-activism/

The Negative Side of Social Media

The Roots of Social Media

What is not Social about Social Media: Life from Behind a Screen