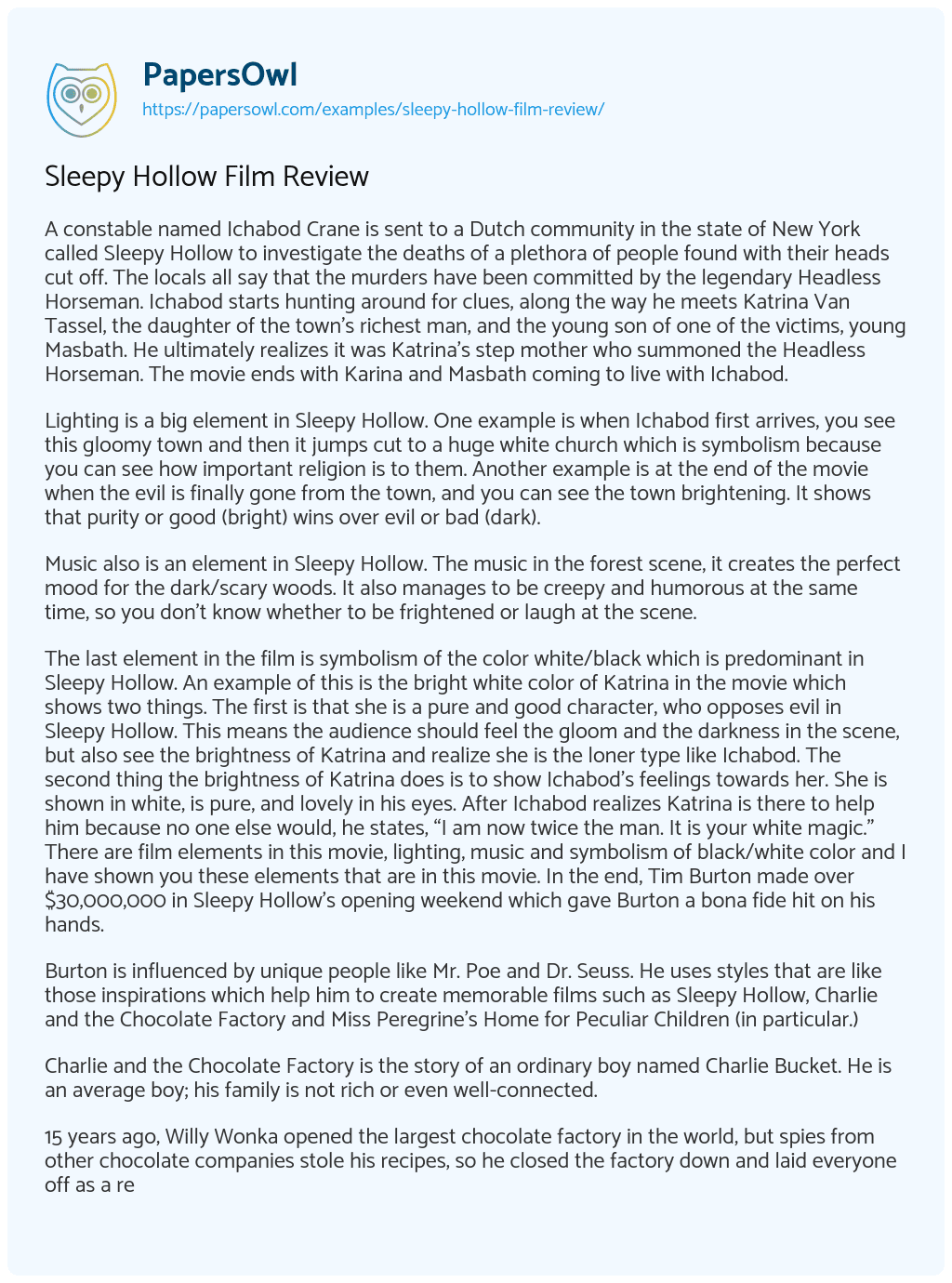 A constable named Ichabod Crane is sent to a Dutch community in the state of New York called Sleepy Hollow to investigate the deaths of a plethora of people found with their heads cut off. The locals all say that the murders have been committed by the legendary Headless Horseman. Ichabod starts hunting around for clues, along the way he meets Katrina Van Tassel, the daughter of the town’s richest man, and the young son of one of the victims, young Masbath. He ultimately realizes it was Katrina’s step mother who summoned the Headless Horseman. The movie ends with Karina and Masbath coming to live with Ichabod.

Lighting is a big element in Sleepy Hollow. One example is when Ichabod first arrives, you see this gloomy town and then it jumps cut to a huge white church which is symbolism because you can see how important religion is to them. Another example is at the end of the movie when the evil is finally gone from the town, and you can see the town brightening. It shows that purity or good (bright) wins over evil or bad (dark).

Music also is an element in Sleepy Hollow. The music in the forest scene, it creates the perfect mood for the dark/scary woods. It also manages to be creepy and humorous at the same time, so you don’t know whether to be frightened or laugh at the scene.

The last element in the film is symbolism of the color white/black which is predominant in Sleepy Hollow. An example of this is the bright white color of Katrina in the movie which shows two things. The first is that she is a pure and good character, who opposes evil in Sleepy Hollow. This means the audience should feel the gloom and the darkness in the scene, but also see the brightness of Katrina and realize she is the loner type like Ichabod. The second thing the brightness of Katrina does is to show Ichabod’s feelings towards her. She is shown in white, is pure, and lovely in his eyes. After Ichabod realizes Katrina is there to help him because no one else would, he states, “I am now twice the man. It is your white magic.” There are film elements in this movie, lighting, music and symbolism of black/white color and I have shown you these elements that are in this movie. In the end, Tim Burton made over $30,000,000 in Sleepy Hollow’s opening weekend which gave Burton a bona fide hit on his hands.

Burton is influenced by unique people like Mr. Poe and Dr. Seuss. He uses styles that are like those inspirations which help him to create memorable films such as Sleepy Hollow, Charlie and the Chocolate Factory and Miss Peregrine’s Home for Peculiar Children (in particular.)

Charlie and the Chocolate Factory is the story of an ordinary boy named Charlie Bucket. He is an average boy; his family is not rich or even well-connected.

15 years ago, Willy Wonka opened the largest chocolate factory in the world, but spies from other chocolate companies stole his recipes, so he closed the factory down and laid everyone off as a result. Suddenly, out of the blue he decides to allow 5 children to visit the factory. In order to do this, they must find one of the five golden tickets hidden in the wrapping paper of five Wonka bars. The winners end up being announced, and the winners are: Augustus Gloop, Verruca Salt, Violet Beauregard, Mike Teavee and Charlie Bucket. One of them will win a special prize at the end which is (Willy Wonka’s Chocolate Factory) because during Willy Wonka’s haircut, he ends up finding a grey hair and realizes he needs to find an heir because he’s getting old.

Augustus gets sucked up while in a chocolate river and is taken away to a room where they create strawberry flavored chocolate coated fudge. Violet, (who ignores Wonka’s advice) tries some of his three-course dinner gum and puffs up like a blueberry. Verruca tries to grab a squirrel and ends up falling down a garbage chute in the path of the incinerator (which is defective so there is three weeks’ worth of rank and stinky garbage down there). Mike tries to use Wonka’s chocolate teleport machine and ends up shrinking himself. All these kids get into accidents which hurts their chances of winning the prize.

One of the visual elements that Tim Burton uses to help create a story is color. It could be the color of the costumes, the color in the sets and how the entire shot is tinted in editing. The lighting also is a factor that has a lot to do with how we see those colors. For example, the colors of the candy factory are dazzlingly bright and are juxtaposed against the drab and dreary scenes of Charlie’s environment.

Burton uses color in this scenario to show that just because a place is colorful, it does not mean that it is a livelier place. All the Wonka related props, characters and scenes (except for the outside of the factory) is more saturated with color and is brighter than the rest of the movie. This could symbolize what Wonka represents here, childhood innocence. It makes the dim and miserable world of the film pleasurable.

Tim Burton did not opt for traditional colors in this movie. He used a combination of rudimentary and pastel colors that enhances all of Wonka scenes. It makes a visual impact for the audience.

Music is also an element that gets used a lot in this film. Burton ends up using mood music to highlight the feelings of the children when they are running amok in the chocolate land room by using the music to explain the children’s thoughts and emotions, Burton allows his audience to gain a keener understanding of the characters, and to feel as though they are in the movie, not just viewing it. This also allows the audience to experience the candy room through the children’s view-point, which ends up creating a connection between the characters and the audience. During the scene, where the women are working for Veruca’s dad, they are looking through multiple boxes to find the golden ticket in one of the chocolate bars for Veruca. In this matter, Tim Burton puts fast music in the scene to represent the women working very fast to find one of the golden tickets.

There are so many examples of Lighting in this film. Tim Burton uses front and back lightning in the scene where Willy Wonka and the children open the door to see all the candy there. The front and back lighting makes the scene look creepy although the chocolate factory is supposed to be a fun place, but it appears dark and ominous. Another example of front and back lighting is when showing Charlie’s sculpture. Burton uses lighting to emphasize happiness or sadness. For example, when Charlie goes home at the beginning, Burton uses high-angle lighting to show Charlie’s house in darkness (making it look tiny and you get a spooky vibe from it.) This lighting makes you think the family is sad all the time but it’s quite the contrary, the family is nice and respectful. The film used a long and wide shot which was a high angle shot (bird’s eye view) for at least three seconds then gradually zooms in. The camera often zooms in to close-up shots particularly whenever Willy Wonka (Johnny Depp) remembered or tried to reminisce about something.

There are film elements in this movie, color, music and lighting, I have shown you these elements that are in this movie. In the end, Tim Burton made over $56,178,450 in Charlie and the chocolate factory’s opening weekend.

Burton is influenced by unique people like Mr. Poe and Dr. Seuss. He uses styles that are like those which help him to create memorable films such as Sleepy Hollow, Charlie and the Chocolate Factory and Miss Peregrine’s Home for Peculiar Children (in particular.)

Jake Portman feels like his life is in a rut and thinks he isn’t special. One day at work, he gets a phone call regarding Abe (his grandfather). Jake then calls Abe (who sounds scared). Jake gets a ride over to Abe’s house and finds it ransacked. Jake finds Abe lying on the ground and without eyes. Abe then dies.

The audience then sees a flashback of Jake as a child with Abe telling him tales about running into monsters and oddities. Abe would tell Jake about a group home for children run by Miss Peregrine, who along with the other children there, have Peculiar abilities that makes them odd.

Jake goes off to find where the home is but when he gets there, he finds that the home has been annihilated. The next day, Jake returns and finds a group of children there. He ends up knocking himself unconscious. He wakes up to find himself being carried by a little girl named Bronwyn. Jake then meets the rest of the children and Miss Peregrine that Abe told him about. Miss Peregrine explains the time loop situation to Jake. Miss Peregrine also explains they cannot live outside the loop, or else they will die.

Jake finds a letter talking about a Mr. Barron when he returns to the present. Jake is skeptical about a Mr. Barron (who is mentioned in the letter) Emma tells Jake that Mr. Barron is a “Hollow” (a failed experiment involving a shape-shifting bird and a group of scientists which left them disfigured and invisible.) Only way a Hollow can regain a human form is by taking Peculiar children’s eyes.

The Gang gets a visit by Miss Avocet, who informs them Mr. Barron and his Hollow gang are coming to invade their time loop. Jake goes back to the present and gets held hostage by Mr. Barron. Mr. Barron then tells Miss Peregrine to stay in her bird form and traps her. The gang then has the final battle with Mr. Barron. Miss Peregrine has an injury, so the gang had to stay in the past and Jake decides to stay with them.