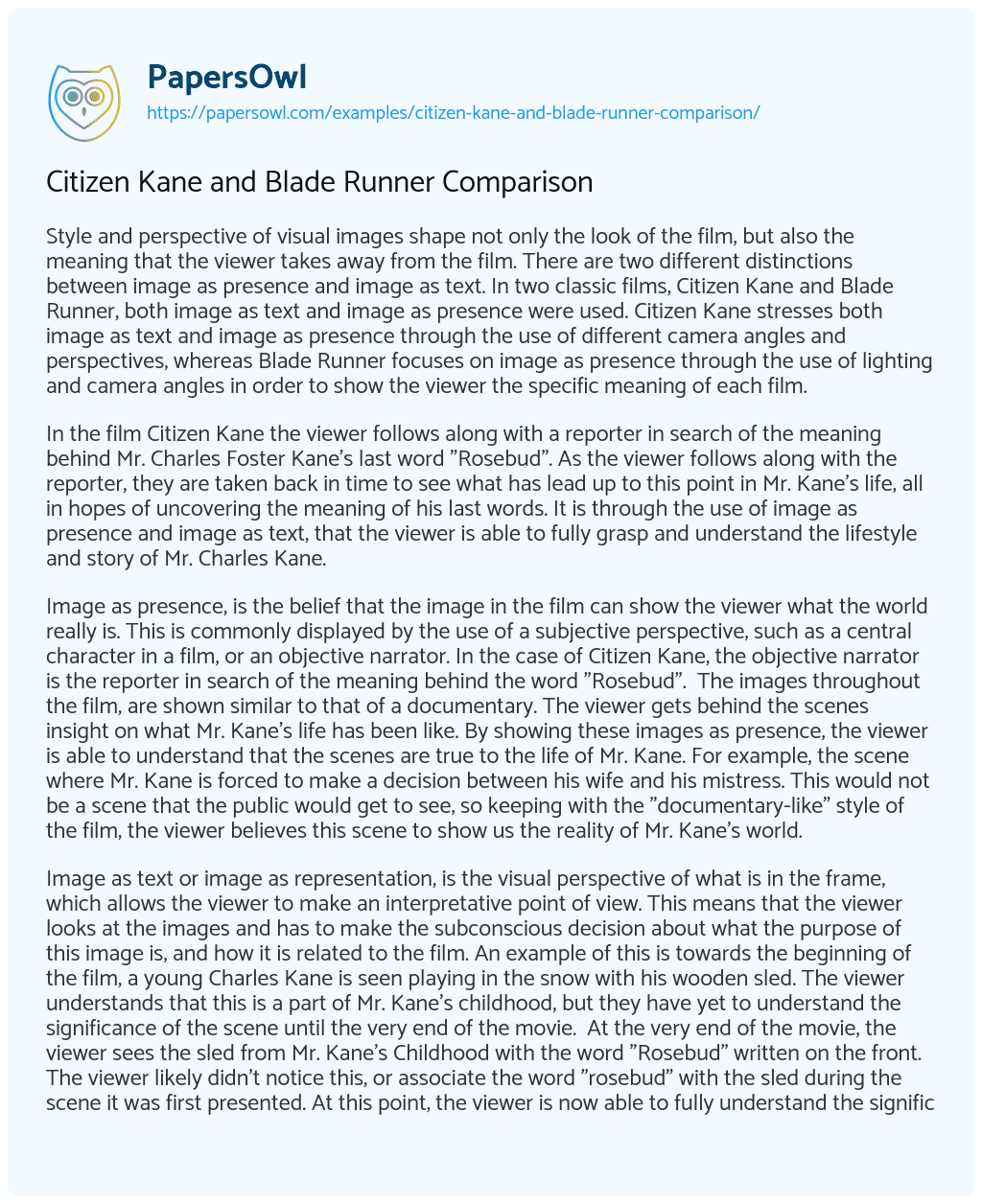 In the film Citizen Kane the viewer follows along with a reporter in search of the meaning behind Mr. Charles Foster Kane’s last word “Rosebud”. As the viewer follows along with the reporter, they are taken back in time to see what has lead up to this point in Mr. Kane’s life, all in hopes of uncovering the meaning of his last words. It is through the use of image as presence and image as text, that the viewer is able to fully grasp and understand the lifestyle and story of Mr. Charles Kane.

Image as presence, is the belief that the image in the film can show the viewer what the world really is. This is commonly displayed by the use of a subjective perspective, such as a central character in a film, or an objective narrator. In the case of Citizen Kane, the objective narrator is the reporter in search of the meaning behind the word “Rosebud”.  The images throughout the film, are shown similar to that of a documentary. The viewer gets behind the scenes insight on what Mr. Kane’s life has been like. By showing these images as presence, the viewer is able to understand that the scenes are true to the life of Mr. Kane. For example, the scene where Mr. Kane is forced to make a decision between his wife and his mistress. This would not be a scene that the public would get to see, so keeping with the “documentary-like” style of the film, the viewer believes this scene to show us the reality of Mr. Kane’s world.

Image as text or image as representation, is the visual perspective of what is in the frame, which allows the viewer to make an interpretative point of view. This means that the viewer looks at the images and has to make the subconscious decision about what the purpose of this image is, and how it is related to the film. An example of this is towards the beginning of the film, a young Charles Kane is seen playing in the snow with his wooden sled. The viewer understands that this is a part of Mr. Kane’s childhood, but they have yet to understand the significance of the scene until the very end of the movie.  At the very end of the movie, the viewer sees the sled from Mr. Kane’s Childhood with the word “Rosebud” written on the front. The viewer likely didn’t notice this, or associate the word “rosebud” with the sled during the scene it was first presented. At this point, the viewer is now able to fully understand the significance of the scene earlier on in the movie. This allows the viewer to recall the emotions they felt during the scene where young Charles Kane was taken from his home. Just as a young Charles Kane had his childhood taken from him, we see the same representation of his life ending with the burning of his childhood sled.

In the film Blade Runner the directors use Image as presence to make the viewer see that the futuristic setting of the film, is in fact the new reality for the duration of the film. This is a common practice in a lot of films and the viewer subconsciously acknowledges the setting to be the reality of the film. The film also uses image as presence when changing the image to be from the perspective of another character. This subjective shot helps to allow the viewer to see and understand the emotions of the different characters. By allowing the viewer the insight to a specific character’s perspective, they are able to feel more of an attachment or relation to the character. This helps to make them more invested within the film.

The lighting within any film is another aspect that impacts how the images are perceived by the audience. The dark lighting and shadows, particularly in Blade Runner help make the image appear more sinister and dramatic. For example, if you have two images of a man in a black trench coat, one with dark shadows and dark lighting, and the other with no shadows and bright lighting, these images would give off two different perceptions to the viewer. One perception would be mysterious, sinister, scary, while the other perspective would be more calm, cheerful, or maybe confused.

Both of the films, Citizen Kane and Blade Runner, use lighting, angles, and focus to change the images to be images of text, or images as presence. Both of these are used in each film to create a different and unique meaning to the viewer. By using these different cinematic techniques, the audience is able to better relate to the characters and better understand the film. While they might not understand the importance of a scene initially, in the end they are able to recall a scene that appeared insignificant the first time it was shown. Overall, the different cinematic techniques, including image as text and image as presence have helped to shape Citizen Kane and Blade Runner into the classic movies they are today.

Scene between Rachael and Deckard in Blade Runner

Blade Runner and the State of Authenticity

The Analysis of Blade Runner 2049 According to the Social Theories