Should Vaccinations be Required for Students to Attend Public School? 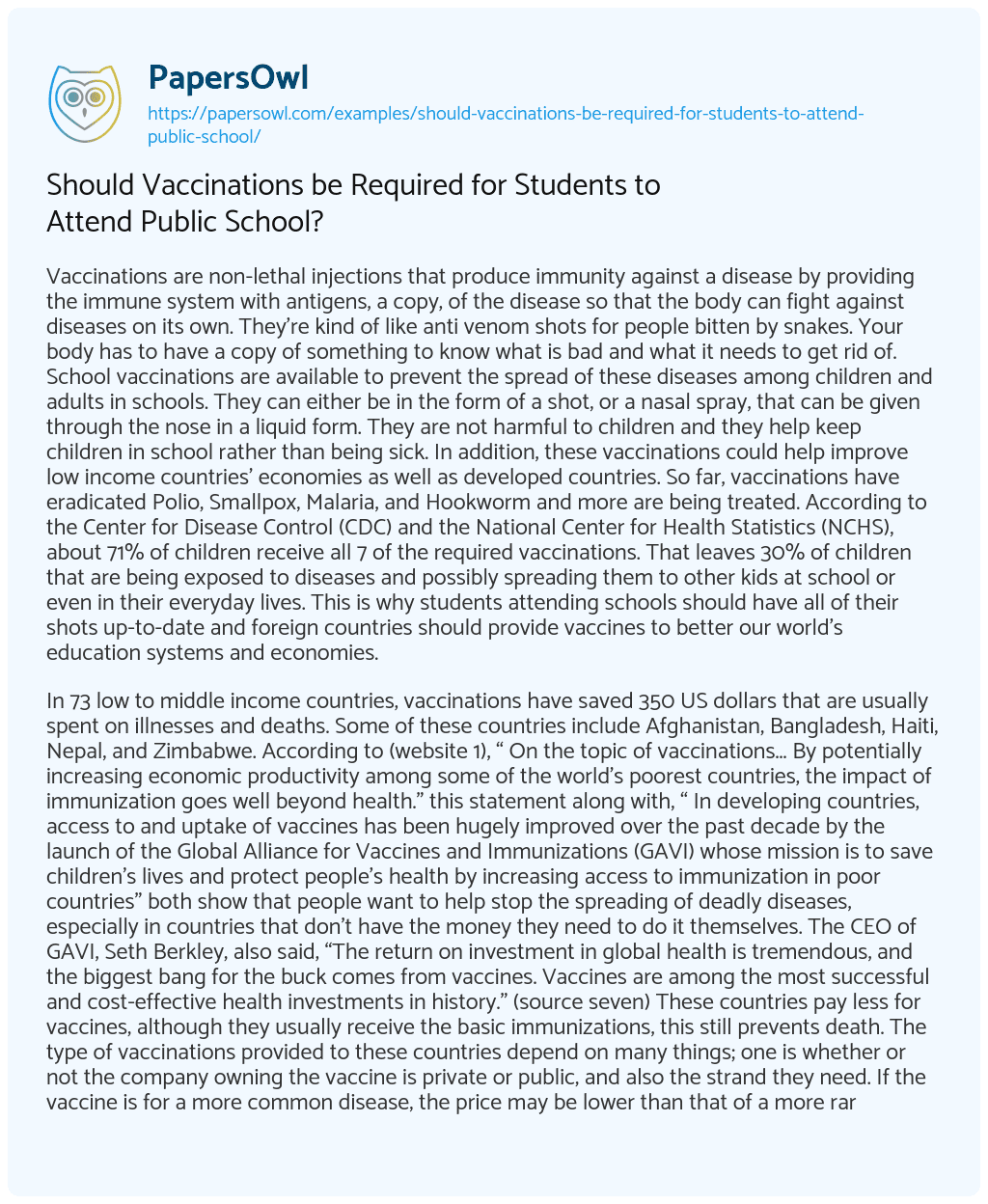 Vaccinations are non-lethal injections that produce immunity against a disease by providing the immune system with antigens, a copy, of the disease so that the body can fight against diseases on its own. They’re kind of like anti venom shots for people bitten by snakes. Your body has to have a copy of something to know what is bad and what it needs to get rid of. School vaccinations are available to prevent the spread of these diseases among children and adults in schools. They can either be in the form of a shot, or a nasal spray, that can be given through the nose in a liquid form. They are not harmful to children and they help keep children in school rather than being sick. In addition, these vaccinations could help improve low income countries’ economies as well as developed countries. So far, vaccinations have eradicated Polio, Smallpox, Malaria, and Hookworm and more are being treated. According to the Center for Disease Control (CDC) and the National Center for Health Statistics (NCHS), about 71% of children receive all 7 of the required vaccinations. That leaves 30% of children that are being exposed to diseases and possibly spreading them to other kids at school or even in their everyday lives. This is why students attending schools should have all of their shots up-to-date and foreign countries should provide vaccines to better our world’s education systems and economies.

In 73 low to middle income countries, vaccinations have saved 350 US dollars that are usually spent on illnesses and deaths. Some of these countries include Afghanistan, Bangladesh, Haiti, Nepal, and Zimbabwe. According to (website 1), “ On the topic of vaccinations… By potentially increasing economic productivity among some of the world’s poorest countries, the impact of immunization goes well beyond health.” this statement along with, “ In developing countries, access to and uptake of vaccines has been hugely improved over the past decade by the launch of the Global Alliance for Vaccines and Immunizations (GAVI) whose mission is to save children’s lives and protect people’s health by increasing access to immunization in poor countries” both show that people want to help stop the spreading of deadly diseases, especially in countries that don’t have the money they need to do it themselves. The CEO of GAVI, Seth Berkley, also said, “The return on investment in global health is tremendous, and the biggest bang for the buck comes from vaccines. Vaccines are among the most successful and cost-effective health investments in history.” (source seven) These countries pay less for vaccines, although they usually receive the basic immunizations, this still prevents death. The type of vaccinations provided to these countries depend on many things; one is whether or not the company owning the vaccine is private or public, and also the strand they need. If the vaccine is for a more common disease, the price may be lower than that of a more rare strand. In a study conducted to find the number of averted deaths when people received vaccinations from 10 popular diseases, the total number of prevented child deaths was approximately 20,000,000. A couple of the vaccines that were administered included Hepatitis B, measles, yellow fever, and the human papillomavirus. The same study above, also showed that, “Vaccination programs based on highly effective vaccines that are given in early childhood and target pathogens causing acute disease would be expected to have relatively high economic benefits.” says (author from

source 1) If vaccinations save this many lives imagine how much money the average person is saving. The cost for a funeral is between seven and ten thousand dollars, and the study mentioned above only showed the lives saved from 10 vaccinations. That number of saved lives was 20 million, which would have cost families about $170,000,000,000 for funerals.

“Vaccination is ranked as one of the 10 greatest public health achievements of the last century and is the number one contribution to decreased global morbidity and mortality” says (author of source 3). Unfortunately, misunderstandings between doctors and parents can stop the administering of vaccinations. Jeffrey Kluger, a journalist and author, said, “Vaccines save lives; fear endangers them. It’s a simple message parents need to keep hearing.” (Source seven) For example, the false statement that vaccinations always cause autism in small children may have happened in a few cases, however scientists say it is very unlikely.. Another is the idea that parents believe one shot is going to make their child completely immune, however, there are many stands of disease and follow-up, shots are necessary to be as safe as possible. Also, diseases can still be introduced to people from foreign visitors or visiting a foreign country yourself. They can expose children to new diseases, which is why parents also need to take their children back to the doctor for the booster shots.

In addition to these claims, when students attend school, they put more money into their school’s accounts, that they can spend on new textbooks, desks, paper, and all other necessary classroom supplies. In the United States, if these students are missing class because of illnesses, their school could be losing up to $12,000 per student a year (depending on their state and school district). Not only is the school losing money, but if parents stay home from work to take care of their sick child, they are losing money from work and spending money on medications. Hepatitis B, the most common disease, has affected 2 billion people in the world and even though there isn’t a cure, the average cost for the antiviral medication can cost anywhere between $48 and $6,000, while Influenza only costs about $70 for medications.

Lastly, vaccinations are considered a form of preventative maintenance. Which is basically something that prevents further maintenance or medications in this case. So, vaccines are meant to help keep you immune from harmful diseases and if you have insurance you know they give you a certain amount of free doctor visits a year. This is because they want you to go to the doctor for your regular check-ups and shots. If you contract a deadly disease that you weren’t vaccinated against, your insurance company will have to pay for your medications and bills.

In conclusion, people should get their required vaccines every year and keep them up to date. They protect against the most common and most deadly diseases and most are affordable or even free. Children and elderly people are more likely to contract and spread diseases so if your child is attending a public school it is highly recommended that you keep them immunized to prevent further contraction and spreading. When children are at school, they provide money for supplies and to help pay for teachers so if students are missing, there is a lower amount of money and lower amount of teachers the school is able to pay. Provided vaccinations in low income countries also have benefited economically from fewer sick dead people. Finally, your insurance companies want you to get vaccinated as well, so just help out our current and future generations by going to the doctor, getting the vaccinations you need and keeping them up-to-date.

Should Vaccinations be Required for Students to Attend Public School?. (2021, May 09). Retrieved from https://papersowl.com/examples/should-vaccinations-be-required-for-students-to-attend-public-school/

Attend College after Four Years of High School or Not?

Significance of School Uniform – why it should be Required

Should Students have to Wear School Uniforms?

The Covid-19 Outbreak: Issues for Students that Come with doing Online School