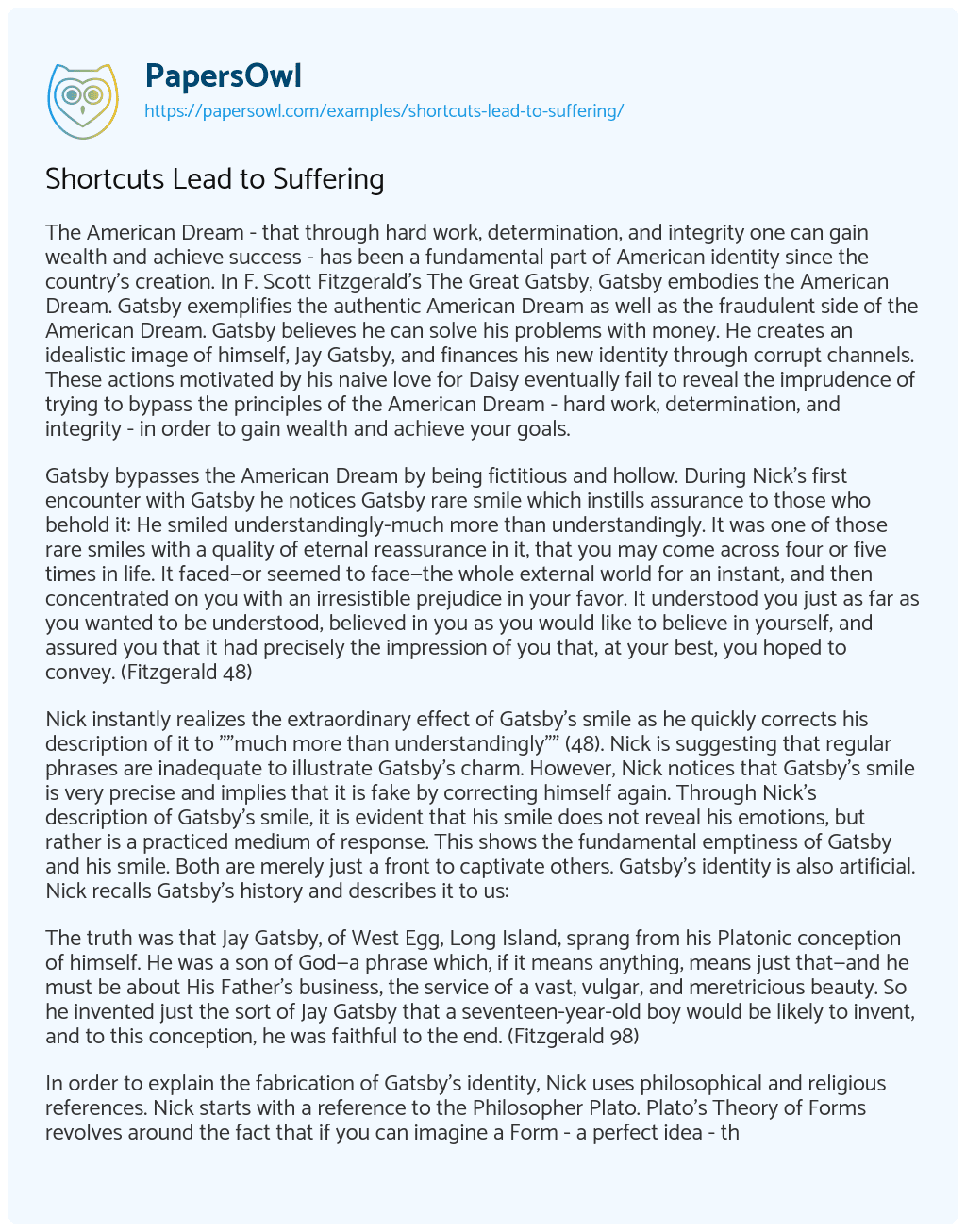 The American Dream – that through hard work, determination, and integrity one can gain wealth and achieve success – has been a fundamental part of American identity since the country’s creation. In F. Scott Fitzgerald’s The Great Gatsby, Gatsby embodies the American Dream. Gatsby exemplifies the authentic American Dream as well as the fraudulent side of the American Dream. Gatsby believes he can solve his problems with money. He creates an idealistic image of himself, Jay Gatsby, and finances his new identity through corrupt channels. These actions motivated by his naive love for Daisy eventually fail to reveal the imprudence of trying to bypass the principles of the American Dream – hard work, determination, and integrity – in order to gain wealth and achieve your goals.

Gatsby bypasses the American Dream by being fictitious and hollow. During Nick’s first encounter with Gatsby he notices Gatsby rare smile which instills assurance to those who behold it: He smiled understandingly-much more than understandingly. It was one of those rare smiles with a quality of eternal reassurance in it, that you may come across four or five times in life. It faced—or seemed to face—the whole external world for an instant, and then concentrated on you with an irresistible prejudice in your favor. It understood you just as far as you wanted to be understood, believed in you as you would like to believe in yourself, and assured you that it had precisely the impression of you that, at your best, you hoped to convey. (Fitzgerald 48)

Nick instantly realizes the extraordinary effect of Gatsby’s smile as he quickly corrects his description of it to “”much more than understandingly”” (48). Nick is suggesting that regular phrases are inadequate to illustrate Gatsby’s charm. However, Nick notices that Gatsby’s smile is very precise and implies that it is fake by correcting himself again. Through Nick’s description of Gatsby’s smile, it is evident that his smile does not reveal his emotions, but rather is a practiced medium of response. This shows the fundamental emptiness of Gatsby and his smile. Both are merely just a front to captivate others. Gatsby’s identity is also artificial. Nick recalls Gatsby’s history and describes it to us:

The truth was that Jay Gatsby, of West Egg, Long Island, sprang from his Platonic conception of himself. He was a son of God—a phrase which, if it means anything, means just that—and he must be about His Father’s business, the service of a vast, vulgar, and meretricious beauty. So he invented just the sort of Jay Gatsby that a seventeen-year-old boy would be likely to invent, and to this conception, he was faithful to the end. (Fitzgerald 98)

In order to explain the fabrication of Gatsby’s identity, Nick uses philosophical and religious references. Nick starts with a reference to the Philosopher Plato. Plato’s Theory of Forms revolves around the fact that if you can imagine a Form – a perfect idea – then it must exist. Since Gatsby can imagine a perfect idea of his identity, he believes it must exist and that he is able to create it. Subsequently, Nick makes a biblical reference. He describes Gatsby as a self-envisioned Jesus “”a son of god … about His Father’s business””(98).

Nick’s description emphasizes the hopelessness of the task Gatsby wishes to complete, reuniting happily with Daisy. Daisy lives across the Bay from Gatsby. Nick is suggesting that Gatsby like Jesus has to walk on water to reach his ambition. Although Nick makes these allusions, he states that Gatsby’s goal was still “”meretricious”” (98), devoid of integrity or meaningless. Gatsby’s lack of integrity is apparent through his precise smile and self-made identity. Gatsby tries to reach his goal by compromising his integrity, one of the principals of the American Dream.

Gatsby hints to Nick that he is involved in illegal business and that although he may have made his money legally the circumstances were suspicious. Also, Gatsby remarks Wolfsheim as a smart man which reveals insight into Gatsby’s beliefs of what is fair. Wolfsheim paid off players in order to achieve a profitable outcome. Gatsby uses the same method to reach his goal, Daisy. He uses his money and throws parties in order to lure Daisy to him. This violates the American Dream as Gatsby uses corrupt channels into order to finance his lavish life which attracts Daisy.

Nick doesn’t believe that Gatsby can revive his and Daisy’s previous relationship. Gatsby staying true to Plato’s Theory of Forms believes he can because he can envision it. This ideologically split between them shows the naiveness of Gatsby’s viewpoint. Nick recognizes that there are flaws in the world and that the idea of perfect forms is unrealistic. Gatsby believes that if it is his will then he will be able to achieve it. Gatsby view is parallel to that of a child who believes anything is possible. As a child his naiveness is admirable but ultimately unrealistic.

Gatsby is successful in restoring Daisy’s and his love due to it being revealed that his success was accomplished fraudulently. Tom reveals that Gatsby has been bootlegging alcohol: ‘I found out what your “”drug stores”” were.’ He turned to us and spoke rapidly. ‘He and this Wolfsheim bought up a lot of side-street drug stores here and in Chicago and sold grain alcohol over the counter. That’s one of his little stunts. I picked him for a bootlegger the first time I saw him and I wasn’t far wrong.’ (Fitzgerald 133)

This revelation terrifies Daisy. It reveals to her that Gatsby is not the man she thought he was and that he lied to her. At this moment Daisy realizes that she no longer can be with Gatsby and he realizes that he can never achieve his goal. Due to trying to shortcut The American Dream Gatsby loses any chance he had of trying to reach his goal of being with Daisy once again. Gatsby seems to represent the American Dream. However, due to his fraudulent practices, imagined identity, and impudence he loses any chance he has to fulfill his goal of restoring his and Daisy’s love.

The Use of Color Symbolism in the Great Gatsby